Bland Invasion: The Film Doctor's one sentence review of Stephenie Meyer's The Host 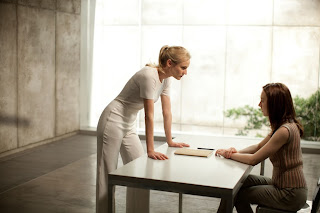 Given that the earth has been taken over by color-coordinated conformist aliens named "Souls," you would think they would suffice as villains (as in the 1956 film Invasion of the Body Snatchers), but Stephenie Meyer appears to be more interested in setting up kissing opportunities for her conflicted heroine Melanie/Wanderer/aka Wanda (Saoirse Ronan) amidst offhand echoes of Twilight franchise: the stiff, inert postures and the blank, denatured, perfunctory mise en scene (in this case lots of silver cars, desert landscapes, and guys wearing white suits); instead of a science fiction thriller, one experiences much harvesting of wheat inside of a large cave, a bearded William Hurt, of all people, leading the tiny human rebel alliance when he's not acting soulful with a rifle, and Wanda (since she carries within her two selves, both the alien and a human) torn between two guys, Team Ian and Jared, when she's not remonstrating with herself in voiceover, saying things like "Good luck with that!" and "Why are you smiling at him?" as various incidental occurrences (Wanda's younger brother Jamie (Chandler Canterbury) cutting himself with a sickle, the Seeker (Diane Kruger) accidentally shooting one of her own kind with a gun) offer reminders of tension in a story that keeps reverting to the bland.
Labels: The Host