Michael Bay's Miami hustle: a one sentence review of Pain and Gain 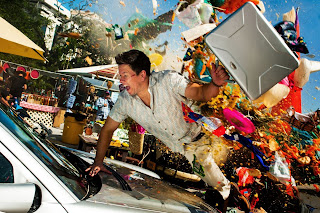 With its short attention span, terminal ageist body consciousness, increasingly frenetic concern with keeping the young ADD viewer amused, and many shots heightened with guns, sunlight, bright Miami Vice colors, Schlotzsky's Deli product placement, blood, strippers, fat jokes, a shot-off big toe eaten by a chihuahua, biceps, American flags, and SWAT teams attacking in slow-mo, the surprisingly not wholly deplorable Pain and Gain skims along like a splatter flipbook of Michael Bay hack fixations starring Mark Wahlberg as Daniel Lugo ("I believe in fitness") implementing his curdled American dream ("I'm a doer, not a don'ter!") as a likable Miami hustler who uses his supposed employment in the CIA and his brutalization of a "scumbag" millionaire (Tony Shaloub) as a way to score with dimwitted Sorina Luminita (Bar Paly evoking Transformers: Dark of the Moon's Rosie Huntington-Whitely who in turn evokes Megan Fox) by saying "That gun is government issue, and in a sense, so am I," the film following a Spring Breakers-esque aesthetic with Florida sun-bleached excess, desperate innocents turning to sloppy naive gangsterdom based on a Miami New Times story about true-life extortion, kidnapping, and a double murder amateurishly cleaned up in part by a chainsaw that gets clogged with human hair ("The bloodied heads were as slippery as rain-slicked coconuts") wherein the always humorously bulbous Dwayne Johnson (playing ex-con coke-addicted Jesus freak Paul Doyle) absentmindedly roasts some human hands on a grill in public to get rid of the fingerprints (neighborhood lady waving at him) before Lugo angrily calls him and the burning body parts back inside their bad-guy lair; still, Bay isn't that comfortable telling a slightly more adult story given that he's devoted much of his career to ad copy catering to the fetishes of teenage guys, so Pain and Gain backslides into familiar testosterone-filled Armageddon (1998) visual tropes (i.e., macho men walking proudly towards the camera as an  explosion erupts behind them) as much as it soldiers on with its unexpectedly lengthy true-life story about enterprising bodybuilders emulating recent deplorable United States foreign policy techniques (indefinite retention and torture (but sweetened with cute variations, like hanging the businessman upside down from a dry cleaning overhead conveyor and swirling him about the room)), and everyone wanting that ocean-front view of the sunny Atlantic stretching out to the Bahamas-horizon of easy-street living instead of being stuck with the pain of a "shame sandwich" existence as a working-class spotter having to smile and cater to contemptuous clients in another fitness gym.
Labels: Pain and Gain