"If you ride like lightning, you're gonna crash like thunder": 10 questions about The Place Beyond the Pines 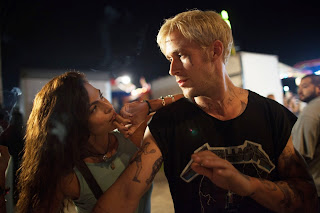 a) When Luke Glanton (Ryan Gosling) rides his motorcycle far into the woods where he meets Robin (Ben Mendelsohn). They later become buddies.

b) When another key character gets lured/forced out to the woods where he risks execution.

In The Scarlet Letter, Hawthorne has the woods suggest the wild, immoral landscape that the controlled civilized world of the town keeps at bay. What does writer/director Derek Cianfrance intend here?

2) Why does Avery's son AJ (Emory Cohen) act like he's in Jersey Shore?

3) Derek Cianfrance likes to trail his camera behind Gosling as he walks away, leaving his head and shoulders in the frame. Doesn't Darren Aronofsky like to use a similar shot in The Wrestler (2008) and Black Swan (2010)?

4) Why do men keep trying to force Romina (Eva Mendes) to accept wads of cash just outside of the restaurant where she works?  (Place tends to rely on repetition of scenes, locations, and camera techniques, perhaps, to unify its otherwise wide-ranging multi-generational plot).

5) What is the exact relationship between Gosling's work in Drive (2011) and The Place Beyond the Pines? In both films, Gosling plays a reticent, charismatic, and talented driver/motorcycle rider who commits crimes (the last of which goes bad). In both films, he also falls for an inaccessible woman who has a man already (and child). In an interview, Gosling points out that "Drive is a very surreal movie, more of a dream, and this [Place] is a film all about ramifications and the consequences of your actions." True enough. Yet, I kept thinking of Drive (one of my favorite films of 2011) while watching Pines.

6) Is Luke a kind of reply to the Driver in the earlier film, a more delinquent/stupider/psychotic version of a character?  Does Cianfrance mean to demythologize the former movie?

7) What does The Place Beyond the Pines suggest about fatherhood and the way an absent father creates legacies for future generations to address? 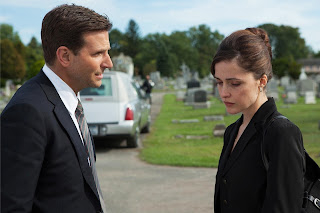 8) Does Cianfrance mean for the viewer to think of that verse from Numbers 14:18: "The LORD [is] long suffering, and of great mercy, forgiving iniquity and transgression, and by no means clearing [the guilty], visiting the iniquity of the fathers upon the children unto the third and fourth [generation]"?

9) When Place suddenly shifts to 17 years in the future, and Avery's attending the funeral of his father, are we meant to think of Michael Corleone attending his father's funeral on a sunny day late in The Godfather (1972)?

10) Given Luke's instinctual talent for speed and escape, why does he (of all people) ruin his life in an attempt to stay in one place and raise his son?
Labels: The Place Beyond the Pines

Greg said…
The last question you bring up is one that has been bothering me as well (and on the whole, I really liked the film). Obviously Luke is greatly affected when he learns that he has a son, but why? There are certainly men out there who are content to play no part in their children's lives, and Luke as a character shows no evidence of other relationships in his life. Maybe he's just sick of being a carnival stunt-rider and wants to settle down? Understandable! But I would've liked to have seen more.

Really I would have liked to have spent more time with the first act (which I thought was the strongest), than the other two.

Also as a sidenote, as a native of the Albany/Schenectady area I have to say that the filmmmakers did a good job incorporating local details into the movie (one of the characters had a Tough Traveler backpack, a local Schenectady company). That was something I and the people that I saw the movie with got a real kick out of.
April 25, 2013 at 11:13 AM

The Film Doctor said…
I also didn't fully understand Luke's motivations, but that was still part of the reason why I found the film intriguing. I imagine that one reason that critics prefer the first act is due to Gosling's evocative performance, the many contradictions of his character, the various ways in which Gosling knows how to withhold information from the viewer, and yet still charm. Also, Eva Mendes holds her own surprisingly well. Luke is less predictable than any other character. His life seems to be a matter of chance and arbitrary talent, and the camera likes his hobbies.

In comparison, Bradley Cooper's Avery lives much more within the enclosures of being a cop. I liked the shot where Deluca (Ray Liotta) holds himself just on the edge of the car window as a way to convey his distrust of Avery, but the corrupt police force plot point seems more imposed on the storyline, whereas Luke's quandary is more organic.

At any rate, I like any film that teases me with hints of an overall coherence that proves tricky to unravel.
April 25, 2013 at 12:44 PM

Jason Bellamy said…
"At any rate, I like any film that teases me with hints of an overall coherence that proves tricky to unravel."

* One other time that "the pines" is a place of significance is when Cooper's character almost has a fateful moment with Liotta, before the other one you mention.

* You could argue that at the very end of the movie, the character escapes to a "place beyond the pines," beyond the almost Shakespearean tragedies of his past.

* Is this Mendes' best performance? I think it might be.

* I wish they hadn't wasted Bryne.

* I read it that Luke was without his own father and thinks that's why he's the way he is. He's the stereotypical (and thus inspired by truth) guy who has never felt a purpose in life and now has one thru fatherhood. He never had a reason to stay in one place. But his son gives him that.
April 28, 2013 at 8:58 AM

I tried to include a reference to that other woods scene without playing the spoiler. The combination of all three scenes led me to think that there's more to Cianfrance's vision.

I liked the last scene of the movie, the way that Jason picks up his dad's instincts nonverbally, and the way the camera holds still as he speeds out of the frame, in effect escaping the fate of the movie.

You provide a good answer for Luke's motivation, but I guess I prefer Gosling in mysterious mode. He's more charming when I don't know what he'll do next
April 29, 2013 at 4:08 PM

In regards to the similarities between Luke and the Driver, I felt much the same way that you did. However I would say Luke is a more flesh and blood version of the Driver.

Although they have slightly different circumstances, the scenario that best highlights this difference is when both characters are introduced to their rival father figures.

When the Driver meets Irene's husband (sorry the name escapes me now, though I do remember a joke about his name, something to do with "Deluxe"?), he ostensibly accepts this and begins to remove himself from the situation.

But we can see through Gosling's performance that Driver just doesn't have the tools to process the event. That is his MO throughout the whole movie. His emotional reactions to things often are often muted or overblown (i.e the elevator).

Luke on the other hand is angry and understandably combative when he meets Kofi (Marhershala Ali). This being his biological son, he has more reason to be angry than the Driver.

Even when he reaches more elevated emotional places, Luke is a more recognizable human persona than the Driver, who is somewhere between a cool icon and an emotionally retarded man.
April 30, 2013 at 9:05 AM

The Film Doctor said…
Thanks for your thoughts, anonymous.

I like your point about the Driver being a "cool icon and an emotionally retarded man." Perhaps that has often been true for icons? The less they show emotion, the more the audience can project whatever they like upon them. Gosling has a talent for hinting at emotional reserves that may or may not become overt in any given scene.

Anonymous said…
Great point and I absolutely agree with it. I remember around the time of DRIVE's release, Nicolas Winding Refn namecheked several of the influences for the Driver; many of whom were characters from Westerns.

I actually think that part of the genius of Drive is the suggestion that the "strong and silent" types we have admired so much in movies are actually that way because they are incapable of behaving differently; psychologically damaged in ways we are either unable or unwilling to see.
May 3, 2013 at 4:29 PM

The Film Doctor said…
Or they are just too cool to show any emotion. Ultimately, I found Luke's weakness (or strength) in acknowledging his son a bit off-putting. I like Gosling better as the Driver.
May 9, 2013 at 4:23 PM

Anonymous said…
in terms of the "following camera", i'm surprised you didn't mention the Dardenne Bros or Andrea Arnold.
i think Aronofsky credits them as inspiration.
all the best, keep it up :)
May 18, 2013 at 2:16 AM

JJ said…
In responce to your last question it is quite explicitly stated. Gosling (Luke) says "I never knew my father and look how i turned out" Its clear that he had promised himself to be a better father than his own dad had been and so abandoning his son was not a plausible option for him
May 4, 2014 at 9:45 AM