The apotheosis of the Hasbro man of action doll: 7 notes on G. I. Joe: Retaliation 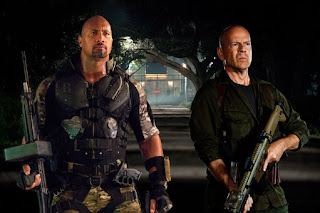 "boys had no problem adopting a new play pattern that allowed them to dress and accessorize their own man of action" --Don Levine, the father of G.I. Joe

Insofar as the filmmakers managed to keep the viewer's mind off of the silliness of the movie's roots in Hasbro man dolls, G. I. Joe: Retaliation proved distracting enough in its proto-youthful-rightwing-propagandistic-postmodern-fascistic-military-fantasy way. Some notes:

1) Channing Tatum (Duke) only shows up briefly to play some video games with franchise-saver Dwayne Johnson (Roadblock) before he's killed by a surprise midnight helicopter attack on the "Joes" in the Pakistani desert (I believe a blown-up jeep falls on top of him). This plot point was surprising, leaving me wondering now what?

2) Roadblock, Flint (D.J. Cotrona), and Jaye (Adrianne Policki) must go undercover to fight the evil Zartan who has disguised himself as the President of the United States (Jonathan Pryce). As Roadblock says, "Our mission is to escort the enemy to the gates of hell!" and "The world ain't saving itself!" Zartan enhances the president's popularity ratings by sending out the "Joes" to pick up some nuclear warheads from some Pakistani compound before "terminating them with extreme prejudice."  He then sets up a new special forces unit named Cobra, initiates a nuclear disarmament summit of most of the world leaders in Fort Sumter, SC, and tortures the actual president (housed in a bunker near the White House) in a PG-13 way by having one of his "new" Secret Service men menace the poor guy with a pair of pliers. In its way, one could find correlations between G.I. Joe: Retaliation and Richard Kelly's Southland Tales (2006).  Something about the Rock's cartoonish machismo lends itself to hallucinatory, adolescent, deranged, and conspiratorial story lines.

3) Director Jon M. Chu prides himself on the 3-D pyrotechnics of the carefully color-coordinated (red being the villainous color) ninja sword-fighting scenes thousands of feet up in the air against the side of the Himalayas. The scene does stand out (although I wasn't clear on who was involved, or why the good guys needed to carry another guy in a body bag, or what the Himalayas have to do with anything).  One wonders, though, amidst all of the swirling aerial ballet, about the martial arts skill required to simply cut the rope holding the enemy ninja up.

4) Bruce Willis (General Joe Colton) comes out of retirement to show off his house full of semi-automatic weaponry cleverly hidden in various drawers and closets. For some reason, he keeps calling Jaye "Brenda" when he isn't talking about his cholesterol being a little high. He also shows off a pistol once owned by General Patton. Oorah.

a) Retaliation begins much as ZDT ends, with a midnight raid on a compound in Pakistan.  It seems a shame that Kathryn Bigelow didn't find a way to include Channing Tatum saying "Drive it like you stole it!" just before the men land in her movie.

b) Zartan (as president) proclaims at one point, "Waterboard. I never get bored." 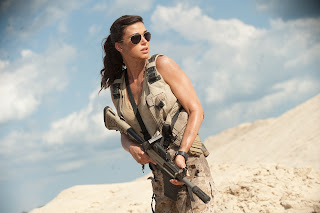 6) Zartan eventually (spoiler alert) leads the world's leaders on a merry bout of nuclear gamemanship, launching warheads willy nilly before unleashing "Project Zeus" from various satellites in a scene oddly reminiscent of Kubrick's Dr. Strangelove (1964) mixed with Diamonds Are Forever (1971) (the war room incongruously located amidst the historical dioramas of a Civil War exhibit in Fort Sumter). With London randomly destroyed and much of the world threatened with Cobra annihilation, the president does note that they won't have to worry about having to worry about global warming anymore.

7) When one of his advisors recommends that he "wait and see," Jonathan Pryce says, "I don't want to be the president who waited and saw. History rewards the bold. Get me the G.I. Joes!"
Labels: G.I. Joe: Retaliaton