"Misrepresenting my vagina": 4 notes on gender and genre in The Heat 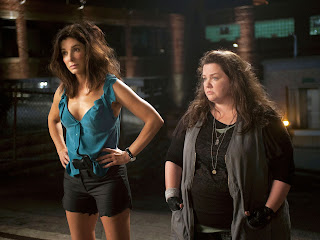 1) I've been annoyed with the way the gender implications of The Heat (directed by Paul Feig, who also directed Bridesmaids) somehow gives the movie's egregiously moldy made-for-TV screenplay a pass. For example, when our two heroines are being followed by a van, uptight Special Agent Sarah Ashburn (Bullock) evades it with some swift steering, but then the van reappears behind them. When the movie needs a climactic scene, the filmmakers turn to an abandoned warehouse in Boston. As the camera lingered on a car at one point, a man behind me in the cineplex said "It's gonna explode," and so it did. Shannon Mullins' (McCarthy's) brother gets shot off screen, so suddenly he's in a coma to provide a bit of ersatz tear-jerking pathos. First-time screenwriter Katie Dippold admits that she's seen "Lethal Weapon about 2000 times," and that's exactly how The Heat views, as the 2000th derivation of a police procedural occasionally freshened up by Melissa McCarthy's ability to riff on a joke to make it funny (Feig was smart to let his comediennes improvise on their lines in Bridesmaids, too). But Bridesmaids was busy reinventing the romantic comedy whereas The Heat comes across as so programmatic, so slavish to the conventions of the genre, and so forced that whatever humor the two leads generate tends to get neutered by the movie's hoary predictability.

2) The filmmakers take a male buddy-cop genre and put its traditional body-oriented crude verbal humor in the mouths of women, especially McCarthy. They think they'll obtain a cross-over audience that way (and they might have), but the comediennes can seem falsified and unnatural as much as we are invited to think of them as empowered. Shannon comments on the tininess of her police captain's balls when she isn't cursing or threatening to shoot men in the crotch. To be fair, at times, the comediennes appropriate female anatomy into the crude humor in unexpected ways. At one point, McCarthy says "You just brushed against my aureole" (I guess as a reference to a scene in This Is 40?).  At another time, she jokes about being able to see Ashburn's "cervix." When Shannon makes a crack to a passing former lover about Ashburn's "dirty attic with some old Christmas lights" and other scattered junk, Ashburn replies by telling the guy that Mullins is "misrepresenting my vagina."

3) The Heat tries very hard to be about Boston (as if Dippold wants to remake Ben Affleck's The Town as a comedy), but many of the local effects seem tossed off and derivative. For example, Shannon's working class Irish family appears to have wandered in from David O. Russell's The Fighter, complete with tacky black velvet paintings of Jesus playing hockey, baseball, and basketball. Ashburn has difficulty understanding one of them when he asks "Are you a narc?" because with his Boston accent, it sounds like "knock."

4) They say that humor is hardest to create, and in this movie the effort shows. Bullock deserves credit for being willing to look silly. She blows a peanut out of her nose and dances drunkenly around in her bra. She likens acting with Melissa to "working with a rabid cat," but McCarthy's aggressive persona can seem coarsened as she throws a phone book at a perp's head, insults an albino, and assaults a john for making a crack about his wife's "messy vagina." I understand and applaud the need to persuade Hollywood to make more female-centric comedies, but it seems like blackmail to be obliged to defend this one.
Labels: The Heat

Joel Bocko said…
Interesting rundown here. Almost saw the movie the other night but ended up skipping it. So far, to be honest, the idea of the Jesus-playing-sports paintings is what most makes me want to see it and a few seconds of clever ephemera aren't worth $12.

As far as the feminist framing/marketing tool: increasingly, I'm coming to see mainstream, pop culture-inflected identity politics as a way to consciously or unconsciously shill for the establishment & system with impunity (while superficially scolding it) - which, incidentally, goes for the media and governance as well as art/entertainment but I'll leave that for now. This approach's impeccable decades-running left-wing credentials cloak a fundamentally conservative and, well, bourgeois outlook on society (at a time when that society is growing less and less bourgeois, at least economically which impacts cultural self-perceptions as well). Changing the characters' genders or races in otherwise generic efforts, tossing a bone to a female screenwriter or producer or even the occasional director here and there, etc etc are putting window dressing on a jail cell. The film industry as it exists now is fiercely exclusive and elitist - those are the fundamental problems with it, and also the ultimate source of the low profile women and many other groups have within it (sexism and racism are symptoms, not causes).

To my mind, Hollywood doesn't need to be persuaded to make more female-centric comedies; rather more outside filmmakers (including, naturally, many women) need to make films, more conscientious patrons and producers need to fund or find funding for them, and more critics need to highlight them. It's an argument I've been having more and more in recent months and I hope to sooner rather than later put my money where my mouth is.

Ultimately, if Hollywood wants to make crappy comedies (or other bland fare) and if audiences want to see them, that's their affair - if they're to be defeated or rerouted it will be from without, not from within. But those of us who want more will need to work to create and promote those viable alternatives. After writing this, I feel like it might sound hectoring, haha, hope not as that's not my intention! In truth, I write stuff like this mostly to encourage myself.

Anyway, enjoyed reading this greatly. And nice to see Feig getting work at any rate, as Freaks & Geeks was wonderful and until Bridesmaid he didn't seem to be catching the same wave that was lifting all the other boats from that show (except for the occasional Office episode). From the sound of it, though, wish the material was better.
July 1, 2013 at 1:14 AM

DeadSpiderEye said…
Humour -- yeah difficult really, especially with a feature length production. You need to engage with tedious details (no sarcasm intended) like: plots, action and that curious 90 minute level of character development, The problem is that, unless there's some intrinsic link between the humour and the matrix within which its embedded, one or the other going to seem contrived, or rather seem obviously so, because of course they're contrived. I have to confess I'm not that of aware on Bullock, is she good? I seem to recall enjoying her in Miss Congeniality but I was probably nursing a bottle of gin and exploiting the wonderful versatility of digital media in regard to replaying any scene with swimming costumes and high heels.

I get the feeling this a kind of chick laden Lethal Weapon, another confession, I'm not fan of that breed of humour, the dark and chilling gallows wit of the Connery era Bond being more to my taste. Let's it face it though, I'm outa step this'll probably go down a bomb at the multiplex, fantastic (sarcasim intentional).
July 1, 2013 at 4:12 PM

The Film Doctor said…
"more outside filmmakers (including, naturally, many women) need to make films, more conscientious patrons and producers need to fund or find funding for them, and more critics need to highlight them."

Excellent point, Joel. I was bothered by the way the identity politics of The Heat might blind some to the weaknesses of the screenplay. It's still a curiously conservative and generic film, reminding me of something like Mannix, even with McCarthy's efforts to enliven her scenes.

Thanks for your thoughts, DeadEyeSpider. Bullock does much with the implicit awkwardness of a movie star trashing her image, and I give her credit for playing the straight woman to McCarthy's more freewheeling anarchic playfulness.
July 1, 2013 at 8:43 PM