Hi-Yo Silver and the taxidermic crow: 10 notes on Gore Verbinski's The Lone Ranger 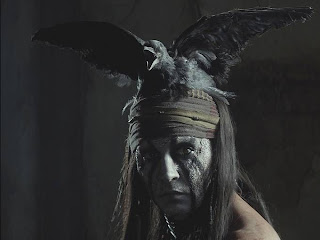 Like an immense beached whale rotting at the local Regal cineplex, The Lone Ranger fascinates me with its epic pleasing spectacle of Disney writing off hundreds of millions of dollars. Whereas the corporation's last massive flop John Carter was extremely hard to follow, The Lone Ranger has a compellingly convoluted sense of itself. I did enjoy the movie's two major set piece action scenes involving runaway trains, but the rest of the movie raises many questions:

1) How much did the last three Pirates of the Caribbean movies make The Lone Ranger feel tired at the outset?

2) Why is the Lone Ranger called the lone ranger if he has Tonto by his side?

3) Is the frame narrative of a boy running into an elderly Tonto in a 1933 San Francisco Wild West show supposed to remind us of those Disney animatronic president exhibits or the early freak show scene of David Lynch's The Elephant Man?

4) What should we make of the frame narrative boy's 1933 bag of roasted peanuts appearing out in the 1869 desert when Tonto throws the bag onto a corpse in a shallow grave? Is that a playful meta-cinematic gesture?

5) What is The Lone Ranger's exact relationship with its source material, i.e. the 1933 radio series and the 1949-57 TV show? One gets a hint at an answer when the Lone Ranger yells out "Hi-Yo Silver!" as his horse rears back dramatically underneath him. Tonto promptly replies, "Don't ever do that again."

7) Did Verbinski include Helena Bonham Carter as the one-legged Madame Red Harrington (her ivory artificial leg housing a rifle) to simultaneously remind us of innumerable interchangeable Tim Burton movies as well as Cherry Darling (Rose McGowan) in Planet Terror (2007)?

8) Why does Tonto occupy himself with "feeding" a taxidermic crow on his head for much of the movie? I'll try to tackle this last question:

9) Depp admitted that the inspiration for Tonto came from a Kirby Sattler painting in which a Native American has a crow flying behind his head, an image which Depp deliberately misread. As Depp said, "I thought: Tonto’s got a bird on his head. It’s his spirit guide in a way. It’s dead to others, but it’s not dead to him. It’s very much alive." At one point in the film, Tonto punches the Lone Ranger, and then says the bird made him do it. At another point, Tonto's crow headdress shifts and somehow opens its beak (see above) just before Tonto escapes from jail without explanation (one of several plot holes in the movie). Even before we learn that Tonto has escaped, a crow flies overhead during a massacre of several Marshalls in the desert. Late in the movie (spoiler alert), the elder Tonto disappears and a crow takes his place in the Noble Savage exhibit before flying out of the Wild West circus side show. So did the elder Tonto turn into a crow? Did Tonto fly out of jail? All of this bird imagery even extends to the damsel-frequently-in-distress Rebecca Reid (Ruth Wilson), the widowed wife of Dan Reid (James Badge Dale). The railroad kingpin Cole (Tom Wilkinson) has designs upon Rebecca, and at one point likens her to "a bird in a cage." 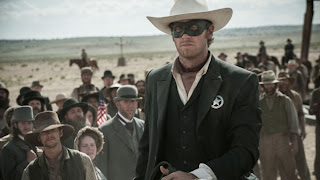 10) Perhaps all of this bird imagery stems from Depp's eureka moment in front of the Sattler painting, but it reminds me of Norman Bates' interest in birds in Hitchcock's Psycho. There's something grotesquely stuffed (like those animatronic presidents) about Tonto's pantheistic mysticism, and that already-killed-off quality extends to the Native Americans depicted in the film. Just as the crow arrives on the scene already dead, so does the Comanche chief proclaim "We are already ghosts" before a cavalry massacres the tribe one evening. Secondly, in his origin story, the youthful Tonto makes a bad trade with two white men (exchanging the location of a silver mine for a pocket watch). He then learns that his entire tribe was killed off by the two greedy speculators who want all of the silver to themselves. When Tonto finds everyone dead, all of the teepees burned, he spies a dead crow in the river, and lifts it out (but does not quite place it on his head). Meanwhile, the Lone Ranger himself gains metaphysical points for kind of returning from the dead, but he's given a classic Disney resurrection pass that the Native Americans do not receive.

---"The task was to make Tonto relevant." --Gore Verbinski

---"Tonto first appeared in 1933, in the 11th episode of "The Lone Ranger" radio show, when creators George Trendle and Fran Striker realized that a solitary ranger with a radio show needed someone to talk to." --Rebecca Keegan

---"I've had it up to here with this Indian malarkey."  --Johnny Depp in Dead Man

---"Depp's Tonto is filled with a New Age-y spirituality that requires massive bouts of overacting. At least the original Tonto didn't make you wonder if he'd had some kind of brain damage. On the other hand, what choice did Depp have? He could not make Tonto a 'noble savage,' obviously, because that's racist. He could not make Tonto a straight sidekick, because that would also be racist. He could not make him a victim or a killer. So instead the character is a mishmash of stabs at sympathy: He's a victim of genocide, a revenger, a lunatic, an exhibition performer. It's a mess. An embarrassing mess." --Stephen Marche

---"But you have to realize you may see a shot that’s two and a half seconds long, but it’s like 'Okay, get the techno crane on to the top of the train, strap it down, reset to one, get the train moving…' So you’re giving up three hours of your shoot day to get a two and a half second shot. That’s what is troublesome about those sequences and I don’t use a second unit, so it’s all first unit photography. So you just try to do them in ways that are cost-effective. You’ve got forty extras inside a train car for this particular day and you try to finish out other parts of the sequence where you might see those forty extras. It’s a painful algorithm, but you just chip away at it. So we basically shot it over the entire production."  --Gore Verbinski discussing how he shot the train sequences
Labels: The Lone Ranger Tonto

DeadSpiderEye said…
I followed your link to the crow snaps, I quite liked the painting, the wings volant convey a more effective posture than Depps droopy adornment though, which looks a bit jokey? This isn't a flick I'd would have sought out really but I might give it go now.
July 11, 2013 at 8:06 PM

The Film Doctor said…
Yes, I wonder if many are steering clear of this film because Depp's getup is too cartoonish and stylized. I'm not exactly recommending the movie, but I did find it compelling due to its incoherencies and its conflicted relationship with its source material.
July 12, 2013 at 6:47 AM

Unknown said…
I can at least answer question #2: The Cavendish gang killed all the rangers but one (Armie Hammer) hence the "lone" part. Tonto is not a ranger, so I suppose it still makes sense. Note, I haven't seen the movie nor do I plan to, this is something I read in a review on dissolve.com
July 13, 2013 at 11:52 AM

The Film Doctor said…
Thanks, Gabor. At least I didn't ask about the silver bullet. I still wonder about that bag of roasted peanuts, however.
July 14, 2013 at 3:17 PM