The Everydayness of Fruitvale Station 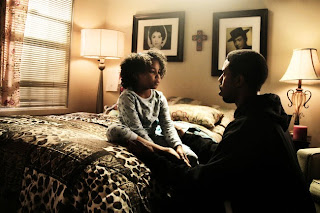 I woke up this morning thinking of the level of insensitivity, boredom, and the jaded unreflective non-reaction that requires ever greater amounts of trolling to get the attention of people. What have the studios been attempting to sell us this past summer? Tanking Disneyfied resurrection burgers with megadeath fries. John Reid (Armie Hammer) rises from the dead as the Lone Ranger with special desert-spiritualized powers. R.I.P.D. gives us resurrection blockbuster-wannabe action-movie style, with freeze-frame explosions going on all around Ryan Reynold's character Nick as he walks in post-death befuddlement and wonder through a warehouse.  He strolls underneath a police car in mid-flight before he ascends past a frozen jet into a Men in Black heaven (with the one black buddy cop (Will Smith) tidily removed). Nick no sooner dies than he's whisked right back as a ghost to Boston where he can pine over his lost wife, transform into an old Chinese guy (to appeal to the Chinese market?), and shoot deados (villains who have the politically correct advantage of being already dead). Back in 1967, Pauline Kael noted how Bonnie and Clyde has "put the sting back into death." Today's tentpole-wannabes do everything they can to anesthetize the viewer to mortality. What could be more deadening than going to see a movie full of dying millions which a studio has calculated will lure millions on a given weekend?

Which brings me to the low budget impact of Fruitvale Station. When I asked my wife if she wanted to see it yesterday morning, she said, "Won't that be propagandistic?" When I asked a friend, he said "I'm not into racial tension/emotional/weepy movies, and it's not a big action film." Regardless of all that, I found Fruitvale Station surprisingly strong, mostly due to its sense of restraint. Writer/director Ryan Coogler does occasionally appear to heighten the pathos of Oscar Grant's (Michael B. Jordan) story at times (emphasizing his bond with his daughter Tatiana (Ariana Neal) with a slow motion shot of them racing together). Coogler also includes a scene where Oscar witnesses a dog getting run over by a car before angrily calling out "Will anybody help?" as he tries to help the dying canine on the side of the road. So one can criticize the movie for being a little emotionally manipulative, but in contrast to all of the oomph-laden megadeath going on elsewhere, Fruitvale Station has some impressive differences:

1) It gets you to care about the absurd death of one human being (shot in the back by a transit officer early in 2009) by immersing you in his life for the 24 hour period beforehand.

2) Instead of things having to matter in a grand way, Fruitvale Station is most poignant when nothing special is going on. Oscar enjoys eating his grandmother's gumbo with his family as part of his mother's (Octavia Spencer) New Year's Eve/birthday celebration. Oscar drives around the Bay Area in his car, listening to rap music, stopping to get gas. After midnight, in a celebratory downtown San Francisco, Oscar persuades a shopkeeper to allow his girlfriend (Melonie Diaz) and two other women to use his bathroom. Just as the movie is full of non-happenings, the BART subway stop Fruitvale Station is essentially a bleak publicly funded grey non-place. Its name ironically evokes orange groves in some California-Edenic sunset glory even as it supplies a hard concrete floor on which to suffer police harassment that proves deadly.

3) Whereas Spike Lee depicted a riot as a consequence of a young black man's death at the hands of "New York's finest" in Do The Right Thing (1989), Fruitvale Station doesn't dwell on the aftermath of the shooting so much as it invites you to consider Oscar's attempt to get back his job at a grocery store. He helps a young woman order fish for some southern fried cuisine, and promises his daughter Tatiana a trip to Chuck E. Cheese's. He's by no means virtue personified, fit for sainthood (one of his flashbacks takes place in prison and he considers selling marijuana in the course of his day), but as subtly acted by Michael B. Jordan, Oscar carries the hopeful possibility that one finds in a 22 year old. In the face of Oscar's ordinary day, all of the studio holocausts look small in comparison.
Labels: Fruitvale Station