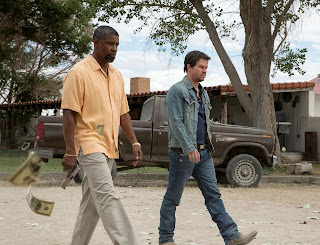 As formulaic Hollywood products go, 2 Guns somehow works in a summer where so much formulaic cinema has gone awry, thus making it just as notable for the many things the movie does not do. 2 Guns presents us with a buddy comedy without resorting to the ersatz Abbot and Costello (superego and id) dynamics of The Heat or the grotesque sight of Ryan Reynolds seeking Jeff Bridges' Baby Boomer approval in R.I.P.D. Allow me to count the ways 2 Guns proved a pleasure:

1) Directed by Baltasar Kormakur, and adapted from a comic by Steven Grant, 2 Guns is just shallow enough to suit the viewer who has been psychologically bludgeoned by the movies of June and July.

2) The film's fireball aesthetics conform to a simple credo: when in doubt, blow it up, especially as a means to conclude a scene. Extra credit goes to the climactic moment when Bobby Trench (Denzel Washington) says "Make it rain" before detonating a pile of cash stuffed in the trunk of a vintage red convertible, thereby simultaneously alluding to Now You See Me with its compulsive use of floating money as mise en scene, Stanley Kubrick's culminating scene in The Killing (1956), and a botched train robbery in Butch Cassidy and the Sundance Kid (1969).

3) When robbing a bank, Stig (Mark Wahlberg) wears a clown mask to remind us of The Killing (again) and The Dark Knight (2008).

4) 2 Guns frequently evokes the charm of Butch Cassidy and the Sundance Kid. Stig effortlessly shoots off the heads of several distant chickens in a manner that shows off his skill as a marksman. As the Kid, Robert Redford does something similar early in Butch Cassidy. Paula Patton's role as Deb parallels that of Etta Place (Katherine Ross in Butch) to show how the movie's latent homoeroticism does not preclude having beautiful women around and about. Also, Stig's covering of Bobby as he eludes various gunmen in a dark warehouse apartment reminded me of the conclusive scene of the western. Like Butch (Paul Newman), Bobby is older and smarter while Stig is more childlike. (Butch Cassidy was, by the by, a big influence on David Fincher's decision to become a film director.)

5) 2 Guns is not PG-13, and I'm about to swear off any movies of that designation forever.

6) The sleeper hold/affectionate clinch that Stig and Bobby maintain after lovingly bashing each other's big Chevy trucks in an extended demolition derby pas de deux, their tendency to square off with guns, to shoot each other lightly (just flesh wounds), these love-taps of cross-racial bantering post-Pulp Fiction friendship all reminded me of Susan Sarandon's line in Bull Durham (1988): "I love a little macho male bonding. I think it's sweet, I do, even if it's probably latent homosexuality being rechanneled. I'm all for rechanneling, so who cares, right?" 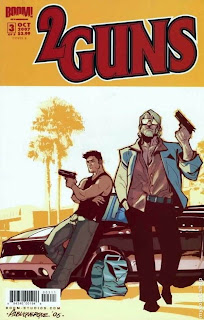 7) 2 Guns accepts the all-powerful ascendancy of the CIA (with Bill Paxton playing cocky agent, Earl) to the extent that Stig and Bobby consider water-boarding the Mexican cartel kingpin Papi Greco (Edward James Olmos). Funny how torture becomes another light form of fun and games coming out of Hollywood. The film also makes nods to the authority of the Naval Intelligence and the DEA, but it's all an alphabet soup backdrop to supply some plot layering for the lovable duo.

8) Even when captured by the Mexican cartel, Bobby and Stig have little to fear except some punches with a metal rod to the belly and the awkwardness of being dangled upside down in front of a bull in a barn (2 Guns is macho enough to have bulls appear frequently throughout). Bobby and Stig also suffer the indignities and hardships of illegally crossing the Mexican/American border in the desert with some Mexican refugees. Basically, Bobby and Stig are untouchable. How could they remain so cheerful otherwise? Whereas Robert Stone's Savages conveyed some of the ruthless ferocity of the cartels, Olmos' Papi Greco is downright cuddly.

9) Once Bobby and Stig's bank robbery gets them in trouble (they accidentally steal 37 million dollars more than they mean to), bad guys keep finding occasions to say "Where's the money?" For instance, Earl points his gun at Bobby's crotch and asks just that. Bobby replies, "It ain't down there. I can guarantee you that, Earl." Later, Papi Greco says "You got 24 hours to bring me the money." Very focused and noir, this emphasis on the money.

10) Ultimately, the success of 2 Guns hinges on Bobby's reluctant acceptance of Stig's friendship. His approval (and by extension, Denzel's decision to appear in this light entertainment) is all that matters, and somehow, given Washington's easygoing fedora-wearing star presence, that suffices.
Labels: 2 Guns