The evils of sugar: 5 (no doubt) semi-paranoid notes 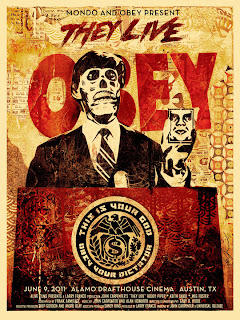 “It seems like every time I study an illness and trace a path to the first cause, I find my way back to sugar.”  --Richard Johnson, nephrologist

1) When I was young, I often stopped by a bakery on the way to school to pick up some apple strudel. After school, I would sit and eat about three bowls of King Vitamin cereal. My family had no qualms about sweets. Early on, my Virginia grandparents exposed me to the pleasures of ginger ale, petit fours, and tomato aspic made with lemon jello. I would watch as grandfather poured extra sugar on his already quite sugary stewed tomatoes during dinner. Since I was athletic, none of this mattered much at first, but more recently I began trying out some various techniques to slim up a bit. None of them worked all that well, and then I tried a very low sugar diet.

2) I kicked sugar about two weeks ago, and it's interesting to see how my view of the stuff has changed, with much imagery of 1988's They Live coming to mind. When I see a billboard on I-95 advertising McDonald's McCafe Frappe Mocha and a Cherry Berry Chiller, I think "drug delivery system." A sign promoting ice cream sandwiches at a convenience store conveys "narcotic fix available here." At my workplace, nice ladies routinely hand out candy as a successful means of manipulating students. Shiny red bags of Jelly Belly jelly beans and Dove dark chocolate "promises" around the household suddenly resemble sinister bright Candyland-marketed bags of crack. The Sweet cupcake place in town strikes me as an egregious opium den of iniquity, selling pockets of addicted joy with much frosting for $2.50 a pop.

3) As time goes on, others hear about my new dietary habits, and they say it's okay as long as one can bring in sugar substitutes, but I'm not going for that either. Every day, the cravings hit me mostly after meals. How about some dessert at that Starbucks? I would think to ask for my significant other for a mint and then stop myself. Suddenly, coffee and tea no longer taste as compelling, now that I'm no longer following Mr. Winston Wolfe's example in Pulp Fiction, who says "Lots of cream, lots of sugar," when asked by Tarantino if he'd like something in his coffee.

4) One's taste for sweet things changes on this diet. Now, a grapefruit tastes very sweet without any sugary addition. I visited a Subway and found that their 9-grain wheat bread tastes like cake. Many of the things that I used to put on my sub (such as their honey mustard) would now make it taste like some sort of highly nutritional candy bar, so I stick to mustard, oil and vinegar. At night, I dream of accidentally eating a bowl of Breyer's Natural Vanilla ice cream in the midst of a crowded party, and realize with dread that all is lost. I even made a $1000 bet with my significant other that I will not sugar binge on anything until November, and that includes a simple bowl of Kellogg's Raisin Bran or a glass of Pepsi.

5) Thus far, I've not lost the bet, and I've lost weight and in general feel much better physically, but the sugar is everywhere, snuck into the most unexpected things--hamburger buns, fries, LemonZest nutrition bars. The cravings persist. "They" want you to consume it--the omnipresent drug.

Craig said…
Congratulations on a difficult accomplishment. I haven't kicked sugar, but I've cut back quite a bit. Now just looking at things I used to inhale (donuts, Smartees) is enough to make me gag.

I've been better at kicking salt, apparently more than most people. Last summer a lady friend came over for dinner, and was appalled that I had no salt in the house for her salad. The fact that there was clearly salt in the salad dressing wasn't enough. Both salt and (as you said) sugar are hidden everywhere.
August 24, 2013 at 1:50 PM

Anonymous said…
Congratulations on taking control of your eating habits. Now you can cut back on meat.
August 24, 2013 at 1:55 PM

DeadSpiderEye said…
I've an anecdote that demonstrates that the acquisition of a sweet craving is culturally derived, if you've sampled tea in the Asian sub continent, that's something you might have figured out already. It goes something this:-

I was browsing an English supermarket, my companion a native of Colorado, asked, "What are those?" with more than a hint of incredulity in her voice, as pointed at the fruit shelves.

I have to admit I giggled here, "Er -- they are apples -- you know, cooking apples."

"You mean you don't have cooking apples in the US -- what do ya make those apple pies with then?"

"Like ordinary apples but much sharper, quite bitter too."

"Well that's why you cook 'em, anyway those apple pies must taste like cardboard made with ordinary apples."

I didn't pursue the subject any further, I was steel reeling from the notion that folk cooked eating apples till they had all the zest of stewed turnip then coated 'em with sugar.
August 24, 2013 at 2:59 PM

Paul Duane said…
As Nick Tosches pointed out in a long and involved Esquire piece on sushi, what Europeans & Americans eat for lunch & call sushi is basically sugary rice wrapped around some crap. It's yet another drug delivery system.
August 24, 2013 at 6:42 PM

The Film Doctor said…
Thanks, Craig. One think I like about going sugarless--salt, meat, fried foods seem to matter less, and going without sweets automatically makes you eat better.

Your anecdotes remind me of the time I learned in Paris, after years of being exposed to the American chemical mixture Country Time Lemonade, that one could simply combine lemon pulp with sugar. Americans specialize in substituting highly flavorized unhealthy concoctions for genuine ingredients.

How much has the food industry followed the cigarette manufacturer's playbook in making their product extra addictive?
August 24, 2013 at 7:04 PM