Atrocity montage: a review of Nightcrawler 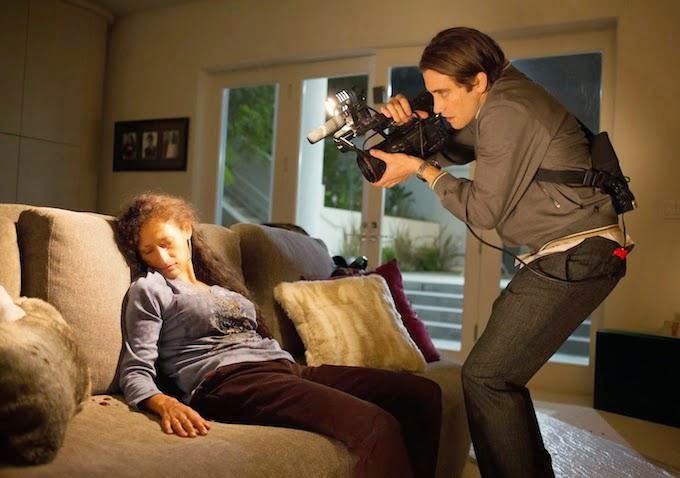 As a fan of Donnie Darko (2001), I tend to view Jake Gyllenhaal's subsequent career in term of Donnie gets a double! (Enemy 2013), Donnie joins the Marines! (Jarhead 2005), and, now Donnie, looking thin and desperate, videotapes the victims of Los Angeles crime! Donnie Darko was kind of a superhero but also occasionally a creep, and Louis Bloom (Gyllenhaal) in writer/director Dan Gilroy's Nightcrawler proves an unexpectedly savvy creep, well versed in the contemporary business argot of motivational jargon, quick to use terms like "high goals," "hard worker," "persistent," and cheesy acronyms like FEAR, which stands for "False Evidence Appearing Real." As he says,"today's work culture no longer caters to the job loyalty that could be promised to earlier generations. But I believe that good things come to those who work their asses off and that good people who reach the top of the mountain, didn't just fall there." His vocabulary is so stylized, he reminds me a little of Brendan in Rian Johnson's Brick (2005), only now the tough guy lingo of Dashiell Hammett has morphed into a nightmarishly effective pseudo-inspirational corporate-speak.

I enjoyed the sick sensibility of Nightcrawler. The movie raises the question: how is Louis Bloom's business rhetoric perfectly appropriate for a man who goes around videotaping the mishaps of the LA night and then selling them to the local news for profit? Both nightcrawling and business practices are built upon the victimization of the public, the easily duped fears of the middle class, and the heartlessness of the rich. If everyone makes it a habit of vicariously or directly using others to satisfy their cravings, why not use the newly bloody as entertainment? If we enjoy the lurid display of car crashes (as in J.G. Ballard's 1973 novel Crash), shouldn't we also relish watching people getting suckered by their employers, the stock market, and the banks?

The difference with Louis is that he recognizes what sells without being hampered by ethics or any antiquated notions about human compassion. He thinks like a movie or local news executive or a depraved director. What matters to him is the composition of the shot for maximum gruesome effect, blood and suffering as the root of postmodern-day aesthetics, and the infinite appeal of what morning news director Nina Romina (Rene Russo) calls the spirit of what she airs: "a screaming woman running down the street with her throat cut." Bloom understands what underlies many business transactions: the theft of people's rights, their health, their money, their attention, and especially their privacy. Louis also instinctively knows that the key to making a good profit is intimately tied to the heartlessness of that business deal. Those who survive in today's media economy know how to titillate the bored the best, or as a TV executive says, "What bleeds, leads."

Nightcrawler understands that "real" violence and victimization is the best currency, since we're already jaded from seeing too many fake versions in movies and TV. Ever dutiful, Louis assembles a video portfolio of his best efforts on his laptop, a kind of atrocity montage: "Horror in Echo Park," "Drunk Mom Kills Biker," "Nursing Home Nightmare," "Toddler Stabbed," "D.W.I. Crash Claims Four," "Carjacking Woman Dragged," "Headless Body in Carson," and "Businessman Shot in Garage." There's a kind of tabloid poetry in this list that celebrates how people are never more valuable to the media than when they are in the midst of getting killed. Like Robert Altman's The Player (1992), Nightcrawler celebrates the triumph of the lizard brain.
Labels: Nightcrawler