Self-absorbed men with beards: a review of Alex Ross Perry's Listen Up Philip 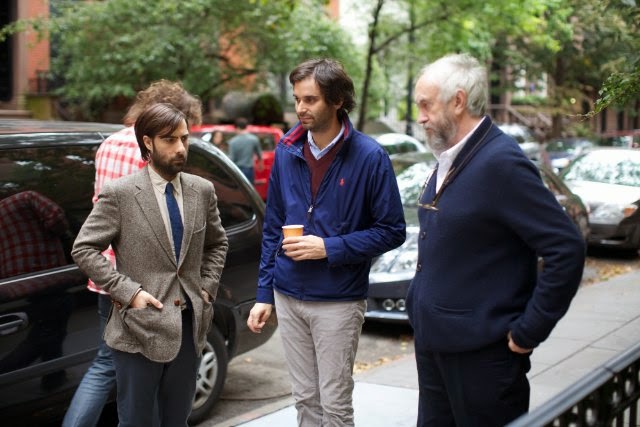 Jason Schwartzman plays the young author Philip Lewis Friedman in Listen Up Philip. He just published his second novel, he lives (at first) in New York City, he's one of the hot new notable writers under 30, and he's an insufferable megalomaniac who holds our attention with his total lack of consideration for others. If he were to be at all nice ever, the movie could lose our interest quickly. Philip begins by dressing down his former girlfriend for being late for a luncheon get-together, so he passive aggressively refuses to give her a copy of his new novel. He storms out of the small restaurant before similarly scolding a wheelchair-bound old friend at a nearby bar. In the latter case, Philip brings up a "Declaration of Principles" that they had written together a long time ago, an allusion to Citizen Kane, and throws it contemptuously in his beer. The movie is full of scenes like this. The viewer wonders if Philip's writing is worthy of all of this grandstanding. He's the capitol A Artist as a little bearded jerk.

Listen Up Philip looks back on Schwartzman's career-defining work as Max Fischer in Rushmore (1998). My respect for the latter film increases every year as I frequently teach it in film class. Max has much of the same arrogance and occasional creative insufferability as Philip, but Wes Anderson leavens his portrait with Max's underlying grief for his deceased mother that takes the form of his infatuation with Rosemary Cross (Olivia Williams). A school teacher at Rushmore Academy, Rosemary tells Max (since he's in high school) that she's clearly too old for him to think of being in any kind of romantic relationship. Max keeps fouling up his relations with Rosemary, Herman (Bill Murray), and others as he tries to manipulate them into playing parts for his own ends, but Max also gets to keep directing plays and therein lies his redemption. By speaking through the last play in code (and also by arranging to have his former friends in the audience), Max can save through art what he cannot fix in his life normally.

In contrast, Philip never gets to use his fiction-writing as Max uses his plays, as a means to resolve his creative talents with his devastated relationships. Listen Up Philip stubbornly refuses to allow us to like Philip ever. What defines an artist is his/her extreme sensitivity, which can often appear to others as just rudeness (as in the case of Inside Llewyn Davis (2013)). While I admire writer/director Alex Ross Perry for uncompromisingly sticking to his grim aesthetic, the movie kept making me think of how Noah Baumbach might have treated similar material with more humor, as in his impressive debut Kicking and Screaming (1995), a movie about a would-be author facing life after college. Baumbach's The Squid and the Whale has an elderly self-absorbed and bastardly bearded writer figure played by Jeff Daniels who is very similar to Ike Zimmerman (Jonathan Pryce), the Philip Roth-like mentor for Philip Lewis Friedman. Baumbach appears more constrained by the autobiographical elements of The Squid and the Whale, making it one of his less likable films.

Without humor, the prickly portraits of artists like Philip and Ike in Listen Up Philip have no release valve. They harden into the inhuman, men who are incapable of treating others (usually would-be supportive women such as Ashley Kane (Elisabeth Moss) another Kane reference (?)) as anything more than worthless. At times the movie comes across as unintentionally comic as Philip moves from one doomed relationship to another. Yet, in Philip's defense, he keeps publishing new books and they appear to be good. In its French New Wave fashion, Listen Up Philip is strong enough in its inbred New York Indie way to make me want to read one of those novels. The title of the film ultimately proves ironic since Philip will never listen, and that's why we love him.
Labels: Jason Schwartzman Listen Up Philip Rushmore