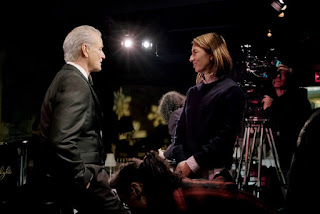 1) When Jason Schwartzman incidentally appears to incidentally play drums and sing a duet in A Very Murray Christmas, were we meant to wonder what would have happened if Sofia Coppola had directed Rushmore (1998)?

2) Given that Paul Schaffer accompanies Bill Murray for much of the show on the piano, where was David Letterman?

3) Given that Bill Murray moodily looks out over the New York night skyline, romps around in a fancy hotel, and conveys a strong sense of being alone and sad in the indifferent city, how much is A Very Murray Christmas a continuation of Lost in Translation (2003)? As Sofia Coppola admits, "Him [Murray] singing in a tux was my motivation."

4) Given all of the previously mentioned parallels, where was Scarlett Johansson?

5) Isn't Sofia Coppola too cool to overly rely upon empty celebrity glamour, thereby placing both George Clooney and Miley Cyrus in a dream sequence (with Clooney fixing himself and Bill martinis on Schaffer's piano)? Or is the show inevitably all about celebrity glamour, but tastefully executed with enough existential Christmas blues and failure to make it palatable?

6) How much is A Very Murray Christmas an extended Saturday Night Live skit with Murray revamping his ironic "Nick the Lounge Singer" crooner shtick from the 1970s? Does the show succeed in part because Murray can't sing all that well? 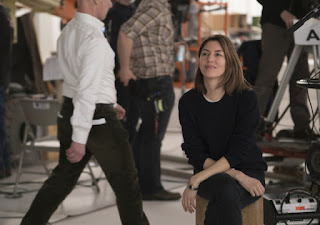 7) Is that bartender really David Johansen of the legendary pre-punk New York Dolls? What has he been up to recently?  Is he intentionally cultivating a resemblance to Tom Waits?

8) Who would have thought that Miley Cyrus could sing a compelling version of Silent Night? It is refreshing to see her not have to work so hard (as she usually does) to hold the audience's attention. How much do Sofia Coppola's movies succeed in part because she does not appear to be trying too hard? Is that kind of naturalism in a director becoming increasingly rare?
Labels: A Very Murray Christmas Bill Murray Sofia Coppola

The Film Doctor said…
The @cinetrix kindly left this comment, and then I accidentally deleted it, so here it is:

"Hoping to watch this later today...
2. Schaffer was the musical director of SNL during the Murray years, so no Letterman necessary.
7. You mean the Ghost of Christmas Past from Scrooged? That guy?
8. Your second and third subqueries really get at the thing I think infuriates her detractors so. She doesn't care what they think a director should be like and does what she wants--like any auteur--not what they think she should do. And she's good at it, even if it's not to everyone's taste."
December 6, 2015 at 1:50 PM

The Film Doctor said…
Thanks, Cinetrix.

I like showing Ms. Coppola's making of videos in my filmmaking class. Here one can see an earlier version of her love for dressing up Bill: