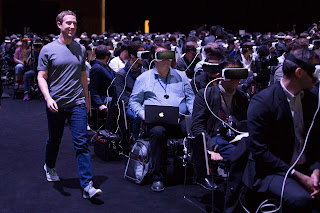 ---"Hundreds of people share a physical space, but no perception, no experience, no phenomenological anchor. The communality of a conference (literally from conferre, “to bring together”) is thrown over for a series of hyper-individualized bubbles. And you’re reminded, from Zuckerberg’s awkward semi-smile, that the man who owns the bubbles also owns what’s in them. That controlling virtual reality, in other words, is only a step from controlling reality itself.

Then again, Zuckerberg arguably does that already."

---The Coen Brothers Use of Shot Reverse Shot

---"In the late 1990s the philosopher David Chalmers coined the term 'the extended mind' to describe how when we use pen and paper, calculators, or laptops to help us think or remember, these external objects are incorporated into our cognitive processes. 'The technology we use becomes part of our minds, extending our minds and indeed our selves into the world,' Chalmers said in a 2011 Ted talk. Our iPhones have not been physically implanted into our brains, he explained, but it’s as if they have been. There’s a big difference between offloading memory on to a notepad and doing it on to a smartphone. One is a passive receptacle, the other is active. A notebook won’t reorganise the information you give it or ping you an alert; its layout and functions won’t change overnight; its contents aren’t part-owned by the stationery firm that made it. The more we extend our minds online, the harder it is becoming to keep control of our digital pasts, or to tell where our memories begin or end. And, while society’s collective memory is expanding at an astonishing rate, our internal, individual ones are shrinking" --Sophie McBain

---The Last Job on Earth

---"Film Critics in Disguise: Pioneers in the Video Essay Discuss Their Art Form" by Andrew Lapin

---"A key purpose of a PhD is to destroy a young person’s ability to enjoy leisure."

---Voodoo in My Blood

---Though The Graduate upholds some of the classic tropes of Hollywood romantic comedy dating back to the 1930s—especially in its climactic deployment of a runaway bride—Benjamin’s paralyzing emotional disconnect from the world around him is what makes his story both fresh and particular to its own time. If 'The Sounds of Silence,' the hit Simon and Garfunkel song that Nichols repurposed for the film’s soundtrack, indelibly captures the dehumanizing atmosphere of the affluent L.A. where Benjamin is marooned, the riddle of his profound anxiety may be aptly captured by a lyric from Bob Dylan’s 1965 'Ballad of a Thin Man': 'Something is happening here / But you don’t know what it is.' Even at the end of the film, when Benjamin has finally won what he thinks he wants, Hoffman’s suite of contradictory expressions tells us that he still doesn’t know what is happening, let alone what will happen next." --Frank Rich

---"What If Sequels Don't Work Anymore?" by Chris Lee

---The 20 Greatest Films by Women Directors

---"The Digital Dirt" by Nicholas Schmidle

---"Then Joy began to screen for critics, entertainment journalists, and awards gurus — and it quickly fell off of those lists. (Lawrence is its sole Oscar nominee.)

The movie’s complicated journey to the screen may seem like a fever dream at this point — that is how it feels to watch the finished product as well. And if anyone involved with Joy thinks it is ironic that a script about a woman who almost had her business stolen from her was taken away from a female screenwriter, they have not said that out loud. But maybe someone is thinking it.

Or maybe they’re thinking, as Clarinda from Joy’s soap opera says as the film opens, 'It doesn’t make sense. I don’t know how something like this happened.'" --Kate Arthur 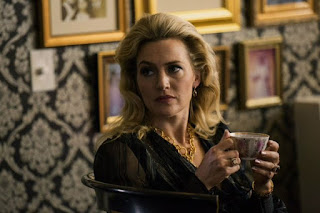