"In want of more brains": 8 notes on Pride and Prejudice and Zombies 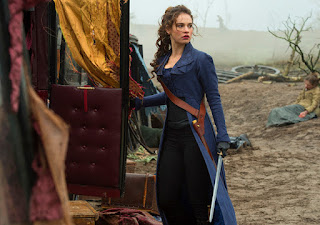 1) Oddly, I drove past the beginnings of a Donald Trump rally at a convention center (with many blue yard signs--Make American Great Again--pinned on the side of the road) on the way to see Pride and Prejudice and Zombies. Somehow, the juxtaposition of the two forms of show business seemed appropriate.

2) Back around 2008, Quirk publisher Jason Rekulak drew lines between free public-domain novels and various popular culture trends until he became fixated on the title Pride and Prejudice and Zombies. He then handed the concept to writer Seth Grahame-Smith, who wrote the bestselling book published in 2009 that launched a brief craze for similar high concept juxtapositions such as Abraham Lincoln: Vampire Hunter (2010).

3) After about 20 minutes into director Burr Steer's version of Pride and Prejudice and Zombies in the empty Regal cineplex theater, I grew depressed, feeling bad for everyone involved. I considered how few things convey the futility of all human endeavor than the obligation to sit through such high concept tripe long after everyone's lost interest in this once clever juxtaposition. Does anyone care about zombies anymore? Hasn't that genre been played out?  Can't one assume so when people like Arnold Schwarzenegger get involved?

4) In one scene, Elizabeth Bennet (Lily James of Cinderella) and Darcy (Sam Riley) discover that they are standing in a zombie-infested cemetery, so they unsheathe their swords and commence stabbing at waving arms that rise from the earth and attempt to drag the two leads to their demise. But, since the moment (like all the others) isn't scary, so I found myself thinking of the poor extra whose blackened arm has to reach around and grasp and wave at nothing for however long it took to shoot the scene. What was that extra thinking, something along the lines of "Have I chosen the right career? Could I have been something more than a zombie arm waving about in the dirt?" 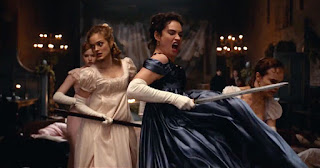 5) Pride and Prejudice and Zombies does not entertain in part due to the incoherency of the fight scenes, and because the movie sticks closely to the novel's plot, so that the incidental zombie fighting proves an egregious half-baked deformation. Many of the key scenes of the novel persist in a condensed SparkNotes form minus the wit and the intensity of the original. Nobody in the movie seems all that concerned with the zombie outbreak so the movie keeps finding ways to hype the "unmentionables" by pointing out that the zombies have taken over London (!), and the day of judgment is at hand (!) with the four horsemen of the apocalypse repeatedly appearing in top hats (!). Meanwhile, Elizabeth and her sisters make gestures towards feminist empowerment by learning Chinese fighting techniques, by assuming a five-pointed star formation when under attack, and by carrying daggers in their garter holsters. The movie's first ball proves an occasion to show off their zombie fighting techniques--stabbing, blowing off heads with 18th century firearms, and otherwise indulging in guilt-free violence against putrefied flesh--dismemberment, puncturing, and evisceration made all the more pleasant due to its lack of consequence.

6) (spoiler alert) Dastardly George Wickham (Jack Huston) eventually proves to have been a zombie all along, but somehow he appears human due to his long undying hatred for Darcy.

7) Leaning my head against the seat next to mine, I had time to consider the meaning of zombies--the flesh's eventual requirement--to rot, to disintegrate gruesomely if not disposed of in some other way. To animate the body at that point in decomposition still denies death. What if the audience were instead to watch an actual corpse left outside to swell until its stomach exploded, to listen to the sound of maggots feeding inside (said to resemble the sound of milk mixing with Rice Krispies)? If we knew the person beforehand, how would that slow process of disintegration go over? No, better to animate the flesh, turn it into a monster, and then kill it again, thereby converting a reminder of mortality into a cypher cartoon antagonist. The viewer can then focus on the handsome young leads and their regrettable decision to appear in this movie. Natalie Portman was originally signed to play Elizabeth, but in the midst of the movie's long 5 year gestation, she wisely chose to be a producer instead. 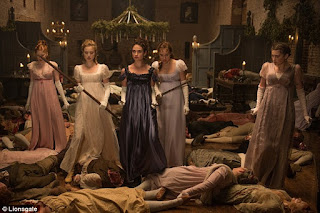