---"For Malick, the cinema is also a matter of the unconscious, of indeterminacy, of tension between decision and accident."  --Richard Brody

---"I think one major reason that Malick's films are so divisive is that they're so nakedly emotional, that he's so blatantly aiming for the sublime." --Ed Howard

---"His quietness and long periods of absence seem to have elevated him to a godlike status in film-making circles, with fellow professionals desperate to get close to him. 'We worked together for a period of over a year,' said British documentary-maker Leslie Woodhead, who was asked by Malick to direct Endurance, a 1998 feature about the Ethiopian runner Haile Gebrselassie and his gold medal in the 10,000 metres at the 1996 Olympic Games. 'I think for a while, I was the only person in America who had his phone number. He remains what he was then, an extremely mysterious figure, whose mythology in Hollywood is impossible to exaggerate.'" --Luke Blackall

---"Knight of Cups is the first film I’ve ever seen where over a third of the audience left the theatre during the film." --Alex Lines

---"Wow. He [Malick] is like a spiritual guide, in many ways. He’s like a child, actually. He’s like a child with such vivid imagination. If he did have preconceived notions or ideas, he doesn’t have them anymore, so he comes with very little judgment, and that’s very evident in the women who play the various characters in the film. One character is a stripper, another is having an affair -- there is no judgment whatsoever. He made it feel very comfortable." --Freida Pinto

---"What had he [Malick] been doing? Well, he read a lot, he listened to music, he travelled widely, he watched birds and every other form of animal life he could find. He thought and he waited." --David Thomson

---"The people of Terrence Malick's new film To the Wonder sure are strange creatures. They don't watch TV or go to the movies or fiddle around much on the computer. Instead they seemingly like nothing more than walking in fields, just sorta ambling dreamily through tall grass and dry brown wheat, the women especially, enamored as they are of twirling with their arms outstretched and their heads tilted up toward the glowing, glassy blue of Malickian heaven. Twirling in fields is essentially what To the Wonder is about; reveling in the expansiveness of the world, feeling overcome and yet also emboldened, made special, by the beauty and majesty of it all. Or something. I don't know. Maybe it's just about twirling."  --Richard Lawson

---"What does all this mean, Terrence Malick? asks a second, unfamiliar voice on the interior soundtrack of this film review, perhaps representing the skeptical point-of-view on films like this. Have you disappeared into your own navel? Is the emperor wearing any clothes? Is there a point to any of this or are you just fooling everyone?"  --Matt Zoller Seitz 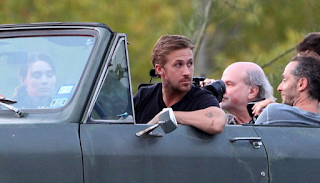 ---"'Well,' I asked myself, 'why not?' Why must a film explain everything? Why must every motivation be spelled out? Aren't many films fundamentally the same film, with only the specifics changed? Aren't many of them telling the same story? Seeking perfection, we see what our dreams and hopes might look like. We realize they come as a gift through no power of our own, and if we lose them, isn't that almost worse than never having had them in the first place?" --Roger Ebert's last review of To The Wonder

---"One day in 1980 or 1981, Malick’s landlord introduced him to Michèle, a tall, thirtysomething blonde Parisienne who lived in the same building. She had a young daughter, Alexandra. … In a year or two, the trio moved to Austin, Texas. … Michèle did her best to adapt to Austin. … But she was out of her element. … Malick would often just leave, for hours, days, or weeks. She never knew where he went, and it made her crazy." --Forrest Wickman

---"The trouble is beauty, which, begging Keats’s pardon, enjoys a fraught relationship with truth. The aesthetic compulsion is so pressing, in Knight of Cups, that someone can approach a person, possibly homeless, who is sleeping on a stone bench, and lay down not a dollar bill or a sandwich but a flower. Malick’s pursuit of the beautiful was already devout in Days of Heaven, in 1978, and in recent decades it has grown more flagrant still. In The Thin Red Line (1998) and The New World (2005), it was touched with environmental anxiety, as the pristine glories of the world were menaced by war and by colonial invasion. Since then, in The Tree of Life (2011) and To the Wonder (2012), the impulse to seek out grace and loveliness—in weather, in women, and in rhapsodic flashes of the past—has all but blunted the dramatic urge." --Anthony Lane

---"He is always distinctive, and anything he does must be of interest. But his style is stagnating into mannerism, cliche and self-parody. Where once he used his transcendant visual language to evoke heartland America, these tropes are now exposed in being applied to tiresome tinseltown LA, where a screenwriter played by Christian Bale undergoes what has to be the least interesting spiritual crisis in history." --Peter Bradshaw

---"I find the best thing is just talking with Terry. He tells me about the characters and what he needs. And he wants to be a little surprised—it excites him not to know. It’s just like the way he works with actors, giving them a little bit of dialogue at a time. You know, he’ll take people off the street and just throw them into a scene. That haphazard sort of 'found' quality is exhilarating to him. It’s the same thing with the sets. He’ll show up to an area that he hasn’t seen. And somehow, just dealing with that informs and invigorates the scene that he wants to shoot there. The unknown is sometimes more exciting than the known." --Jack Fisk

---"I now know that what he [Malick] does is to give himself as many options as possible, given the basic setup, so that when he gets into the cutting room, in addition to the film that he has, he also, sound-wise, has all kind of possibilities that he can put in and take out or play around with. He has all these tools that he can build the final film with." --Brian Dennehy

---"But really, if anyone deserves the bulk of the praise for the strength of Knight of Cups (and here Malick is, of course, the implied added name in every one of these pairings), is the team that scouted the many locations in the most dazzling if terrifying vision of Los Angeles this side of Mulholland Dr. Schmitt and Paulsen (who alongside the location managers have already won an award for their work on this film) found every modernist inhospitable apartment and house available, every barren-looking street corner, and every oppressively empty warehouse to give Malick the canvas he needed for this meditation on loneliness. Exquisite, really." --Manuel Betancourt

---"'The problem with Terry, which I soon found out, is that he needs a writer desperately,' Plummer complained. 'He insists on doing everything, as we all know, and he insists on writing and overwriting and overwriting until it sounds terribly pretentious. … Terry gets terribly involved in sort of poetic shots, which are gorgeous, but they’re paintings, all of them. He gets lost in that, and the stories get diffused.'" --Tim Grierson 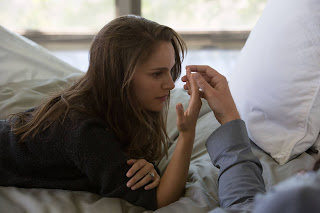 ---"Like Paolo Sorrentino’s Youth, Knight of Cups settles into a lukewarm bath of male self-pity, a condition perhaps more deserving of satire than sanctification. Rick mopes and mutters through an elegantly appointed malaise, wandering the desert in an Armani jacket and driving aimlessly in his midnight-blue vintage convertible. In the room, the women come and go. It’s all very poetic and rarely boring, except maybe to Rick himself. But it’s hard to trust his anguish and hard not to suspect that what is being solicited is not your empathy but your envy."  --A. O. Scott

---"'I prefer working behind the camera,' he added with a smile."
Labels: Knight of Cups Terrence Malick To The Wonder