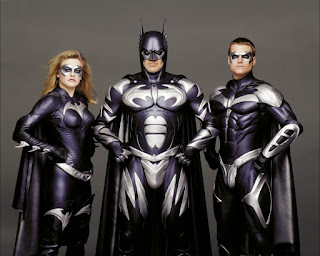 Way, way back when, I used to write reviews for a weekly arts newspaper, and one of my first ones concerned Joel Schumacher's Batman and Robin. Now, with the much ballyhooed release of Batman v Superman: Dawn of Justice, I wonder how much things have changed since 1997:

Somewhere in Hollywood there must be a think-tank devoted to coming up with witty one-liners for Arnold Schwarzenegger. In the new Batman and Robin, in which Arnold plays Mr. Freeze, somebody came up with a whole hatful.

Arnold begins with "The iceman cometh." Later, he threatens to "kick ice" before freezing most of Gotham. Then, while fighting Batman, he claims that "the weatherman is predicting a major freeze," all of this said while zootsuited up in an acid-laced variation of the Tin Woodsman's outfit in The Wizard of Oz.

Arnold gets a reputed $20 million and top billing in this film for being the biggest drag--the rigidity of his ice is all too reminiscent of his acting style.

Overall, I found Batman and Robin an expensive shame, a 2 1/4 hour exercise in visual flash at the expense of basic storytelling. Using the principle that 6 eggs thrown at a wall will make a more interesting omelet, Joel Schumacher loads on 3 villains--Mr. Freeze, Poison Ivy, and some thuggish wrestler dude named Bane--and then adds on Alicia Silverstone as Batgirl, not to mention a pointless subplot about the mental illness of Alfred the butler.

Batman himself has degenerated from the legitimately dark and twisted Michael Keaton to the still-moody Val Kilmer down to the hunky but otherwise pretty bland TV-level George Clooney, who tends to nod a lot and act concerned. Chris O'Donnell plays Robin like some spoiled teenager--he's constantly sulking because of Clooney's patronizing superhero treatment of him.

Of all these pretty shallow people with nice outfits (there's one scene early on where Batman and Robin both wiggle their capes behind them, I guess for that theatrical flare), only Uma Thurman and to some extend Alicia Silverstone stand out.

Uma vamps around like Mae West, of all people, and it's funny to see her in maximum seduction mode, blowing little wisps of purple dust over everyone and wearing thigh high green boots and nuclear reactor red hairdos.

Alicia Silverstone looks and acts much the same as she did in Clueless, tilting her face away slightly, squinting her eyes, and chewing on one of her bee-stung lips. When Silverstone finally gets to play the superheroine towards the end, she adds a certain flare to the histrionics--it's payback time for the up-to-now purely masculine club of Wayne Manor. 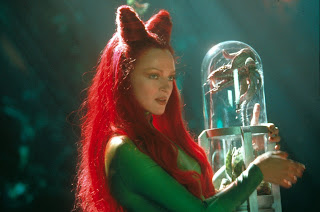 So, except for occasional scenes that work better than others (or does Arnold's badness make Uma look good?), this movie views like the old campy Batman TV show without the BIFF! BOPP! spelled-out fight scenes or the grey tights on Adam West. I don't mind Batman camp in small half hour doses, but 2 hours plus of such flapdoodle wore me down.

Coolio and Elle Macpherson make special appearances, but overall the film affected me like a shiny chrome-designed bat cycle spinning out of control and bashing me on the forehead.