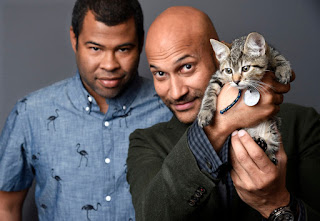 1) I've been annoyed all week because my regular job has kept me from giving Keanu the attention and the blog post that it merits. Captain America: Civil War will likely take over everyone's consciousness soon enough. Key and Peele deserve better than to have their modest but witty movie suddenly shunted aside, knocked out of the cineplex by the new battling superhero blockbuster.

2) To give a sense of the current comedic context, my wife and I recently attempted to watch Sisters on Blu-ray (and we normally like Tina Fey's and Amy Poehler's work). We could stand it for only 14 minutes and 46 seconds before we turned it off. Tina appeared to choose the more childish and immature of the two roles, but we found its posturing unbearable. When I pause to consider good Hollywood comedies that I've been recently, there's, uh, Tangerine? Bridesmaids (2011)? Welcome to Me was good, but I'm blocking most everything else.

3) By combining a contemporary gangster action movie with a cute kitten, Keanu succeeds. Keanu made me want to watch all of Comedy Central's Key & Peele. There's something fundamentally mysterious about the film. Isn't the repeated use of a kitten dodging gushing blood and gunfire in slow motion too obvious? My 70+ year old mother went to see it with her older cat-loving friends, and they loved it. About twenty minutes into the film, Clarence (Keegan-Michael Key) somehow persuades some serious thugs that George Michael was a heavy duty bad motha for dropping Andrew Ridgeley from Wham!, and no one has seen Andrew Ridgeley alive since. Simultaneously, Rell (Jordan Peele) encounters some wild drugged out people who happens to include a deranged-looking Anna Faris in a role that subverts every form of cameo that I've seen in other movies. Did you know that the filmmakers excluded Faris from Scary Movie 4 because she was seen as too old?

4) I'm not sure how. I'm sure why, but Keanu in its slightly wicked yet geeky way proved one of the best R-rated films I've seen this year. Usually, movies set in Los Angeles are an embarrassment to the industry. Critics have proclaimed that Key and Peele shouldn't have tried to extend their sketch comedy skills to a full-length movie. I respectfully disagree. Pro-feline anti-racial stereotype cinema has arrived. Will Forte even appears in Keanu as a charmingly dreadlocked drug dealer, and I was even willing to forgive him for MacGruber. That's saying a lot.
Labels: Keanu