"You are about to be killed by a Zamboni": 10 questions about Deadpool 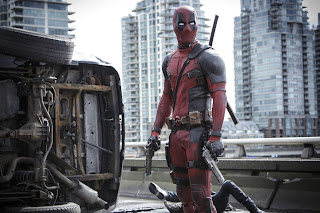 1) Why is it that one of the most successful superhero films insists upon making Ryan Reynolds ugly, demeaning him in multiple ways by calling him "God's perfect idiot," etc., and turning the 39 year old actor into a peculiarly adolescent variation of Donnie Darko (complete with hoodie) who will, as his friend Weasel (T. J. Miller) points out, "die alone . . . for others sake"?

2) What is it about breaking frame that makes Deadpool appealing? Is it because it makes him the viewer's confidante, a partner in speaking the truth of the current state of rotting superhero cliches? Why watch Deadpool at all as it mocks the very form it participates in? Have we reached the point in postmodern culture when the snarky commentary has become superior to the consumer product itself?

3) Why does Deadpool live with an older African American woman named Blind Al (Leslie Uggams)? Is it because she's the living opposite of the standard youthful white male superhero lead? Is Deadpool a hit movie because it calls attention to Captain America's lack of any recognizably human discernible personality, or Superman's for that matter?

4) Why does Deadpool draw crude images on paper on the edge of the spaghetti freeway? Is it because he's the representative portrait of the postmodern artist?

5) What should one make of the scrambled narrative structure of Deadpool with an extended flashback occurring just as our anti-hero skewers a bad guy with his long knives, holding him for a sustained amount of time in the air as he dies?

6) Why does Deadpool insist that his real story is a romance? Is it because that is the one storyline that much of the movie's geek audience may never attain?

7) How much is Deadpool a particularly snarky variation on Spiderman? 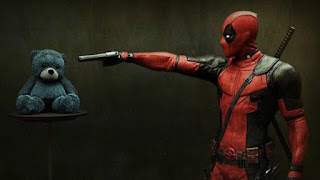 9) What does Deadpool affirm? The desire to be an antihero, the love of his prostitute girlfriend (Morena Baccarin), and the need for acceptance once he has become so deformed as to reach Elephant Man-level ugliness?

10) How does Hello Kitty figure in the success of the movie? My Little Pony? Is Deadpool the new hit Marvel franchise because the man wears Crocs, enjoys Wham!, frequents TGI Fridays, and idly looks through Segway tour pamphlets in his free time?
Labels: Deadpool