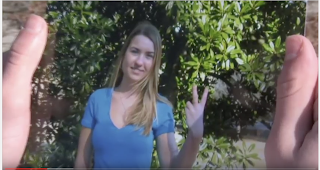 About four years ago, Afterglow Films of my video production class made Third Night (directed by Ryan Gonzalez). The video concerns romantic obsession that reminds me a little of Vertigo:

Here's an interview with the director. In comparison to OK Keyes and Morgan Honaker, Ryan liked to shoot fast and loose, making him the more Godardian director of the bunch.

Also, here's a blog post about the long night in which Erik spent much of his time lying on the cold street in his pajamas as Ryan and his film crew shot the van accident (note: I changed names at the time to protect the guilty): 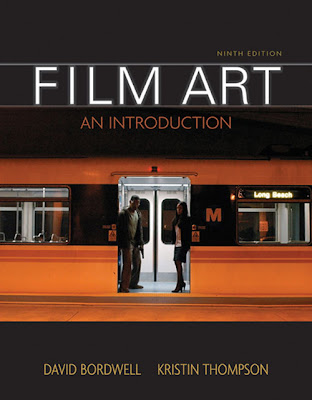 1) How does one shoot a scene where a young man stumbles out of a house at night and gets run over by a van? After a long day of shooting tracking shots of soccer players running (using my car) and a chase scene through the hallways of the school, we loaded up the cast and crew in a van and drove across town to the house of a student whose family was kind enough to let us use the premises. I learned en route that a millionaire lived across the street who might call the cops on us if he sees a body lying on the street. Once there, at about five pm, with the light of the cold overcast day dimming fast, we videotaped Kyle in his pajamas repeatedly stumbling out the front door and gradually working his way towards the street.

Then we parked the van past the "accident" and asked Kyle to lie on the asphalt face down with one arm twisted sideways and not move. Over and over again, the driver stepped out of the van in horror, leaving the door open with the beeping warning sound supplying the only sound, and he would check for Kyle's pulse and step back, aghast, before finding the mysterious photo underfoot. As the director and the cameraman positioned the camera from various angles around the body, a car would appear down the street, and hesitate. Perhaps the driver wondered about this body lying there in the middle of the road with a bunch of cold students standing around it grinning. We had several self-conscious awkward moments like that until we could persuade the drivers to drive on by, with us shielding Kyle's body in the process. At one point, the millionaire did appear when we needed to shoot a take from the front of his lawn, but he proved nice enough and didn't mind. Afterwards, the family of the student graciously invited us in from the cold to eat some rice krispy cakes and peanut butter clusters in their home. After shooting one last take of Kyle stumbling down a hallway in his sleep-walking delirium, we finished for the day.

2) Today, the class began the switch into editing mode. I shared with them the scene in Donnie Darko where Darko's girlfriend Gretchen gets run over, just by way of example, then we discussed different basic editing concepts like classical cutting, master shot, sequence shot, cutting to continuity, matching on action, and such. Given that one student has much of the main footage on his MacBook, I was concerned about him having to do the lion's share of the editing once the principal photography ended, so we divided up the class into groups--one will help the editor, the others will fashion a trailer for the film, a making-of featurette, a short music video promoting the class, and a blooper reel. We also spent some time listening to various possible songs for the soundtrack off of one of the computers (mostly using YouTube), and it proved very difficult for the class to agree on a song. For the chase scene, for instance, we tried out "On the Run" by Pink Floyd (too psychedelic), the music for the parkour chase scene in Luc Besson's District 13 (too techno, a frequent complaint), Def Leppard's "Photograph" (bleh), and the theme song from The Exorcist (too well-known). I confessed to the class that any song by Coldplay makes me break out in hives. We may end up using songs by Radiohead and Muse. The director also decided to wait for a rough cut before matching more songs to certain scenes.

3) By the afternoon, we shot a brief classroom scene that kept being interrupted by piano and trumpet playing nearby. Then we watched of the raw footage of the past few days, and while much of it was fine, I was dismayed by the little mistakes that kept sneaking into takes (the corpse blinking, people looking at the camera, shaky pseudo-steadicam shots, awkward compositions, etc.). Given the set-up of the class, the limited amount of time to shoot, and the aleatory conditions around us at any given moment, it is very hard to not get impatient, to not rush the next shot, and we pay every time there's a small mistake magnified in the camera lens. It's frustrating to see all of the imperfections in spite of all of everyone's best efforts to avoid them. Then again, we have time to reshoot, edit, and polish for the next few days.

4) Lastly, we worked on a title. I've heard that Woody Allen comes up with his titles last in the process of making his films, but we need one sooner so we can incorporate it into all of the extensive DVD extras and featurettes. Students came up with Their Eyes Were Watching Kyle, Collision, The Lady and the Laughter, End of the Night, A Lesson in Obsession, Ms. Strangelove, or How I Learned to Stop Obsessing and Love the Laughter (a popular favorite to be used for the blooper reel), Fixation, Fetish, The Most Dangerous Photo, Mania, The Sound and the Photo, To Love a Picture, Citizen Kyle, Kyle's Road Trip, There Will Be Roadkill, Avatar 2, and Follow the Laughter. We finally settled on Third Night for now.

Tomorrow, the class will begin to piece all of this fragmented footage together.
Labels: ryan gonzalez third night video production notes