File under loss: The X-Files: I Want to Believe 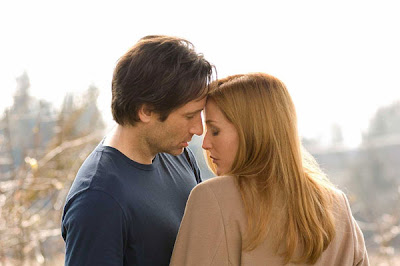 There’s something poignant about The X-Files: I Want to Believe. From its tentative, indecisive title, to its ill-timed release a week after The Dark Knight, I Want to Believe seems cursed from the start. The filmmakers assume enough fans remember the popular Fox television show to go see it, but the people promoting the film don’t appear to be all that sure of themselves. In his brief blog promoting the film, David Duchovny (Mulder) writes in lower case letters: “batman's got everybody scared that we can't do business, and well, it is some kind of a box office juggernaut. but i want to believe. i want to believe that our loyal fans will go see us right away (see some of you at the premiere tomorrow) and they will bring friends who never watched the x files and they will tell a friend and we will become viral and keep growing and hang on for weeks. a boy can dream.” Duchovny writes in other posts about how if the film sells enough tickets, then they can make another sequel. Such a plaintive tone sounds almost passive aggressive in its meekness.

At least Duchovny has his current television show Californication to return to. Gillian Anderson (Scully) made a brief appearance in the film version of Tristram Shandy, A Cock and Bull Story (2005) that might have conveyed desperation (the people in the meta-movie called her to join the film, and she immediately accepted). Perhaps I’m wrong, but ’s situation reminds me of Elizabeth Shue’s appearance in the upcoming Hamlet 2 as the has-been actress. Now gets to play the lead in I Want to Believe, but in an awkward interview for Newsweek, she described how difficult it was for her to return to Scully after spending years arranging to play anything but. When asked what she’s been up to recently, she says “I travel a lot and have bought and sold a lot of houses.”

At any rate, I went to see I Want to Believe and found it an oddly human-sized film that relies more on the wistful chemistry between Mulder and Scully than on anything else. In the interest of keeping the plot free of too many references to the TV show, writer and director Chris Carter sticks to a modest detective story about an FBI agent who disappears one winter night and Father Joe, a Catholic priest/pedophile (Billy Connolly with long grey hair) who has visions of what might have happened to her.

Even during the investigation, Scully works as a doctor at Our Lady of Sorrows hospital. She has amongst her patients a stereotypically cute boy named Christian who is dying due to a rare brain disease. The evil hospital authorities want to give up on the boy’s treatment and dump him off in hospice care, but Scully fights to give him a radical new and painful therapy involving stem cells that she learns about one evening by Googling madly on her computer. This subplot keeps Scully engaged throughout much of the film for some reason, perhaps in case the main abduction story gets tiresome?

After an opening sequence that keeps cutting between a daytime FBI search across the ice and the nighttime abduction, Scully arrives at Mulder’s house in the country. Hermit-like, he has grown a beard. In his isolation, he likes to throw pencils at the ceiling and clip newspaper articles. Appealing to his potential ability to save the life of the missing FBI agent, Scully lures him back into the fold. They go visit the defrocked priest who keeps guiding the agents to various body parts frozen under snow. Scully thinks of backing out of the investigation, and then Mulder persuades her to continue. Like a long-divorced couple debating a reunion, they worry over the inescapable cruelty of the world. Should they “look into the darkness”? What of Dr. Scully’s brain-diseased boy? Should they sleep with each other or maybe just discuss the next toxicology report?

Everyone involved in The X-Files: I Want to Believe seems to know that they may be acting out this charade for the last time. This valedictory sense of loss gives the film its doomed, wintry charm.