Violence to sleep by: Jason Statham and Jet Li fight in War 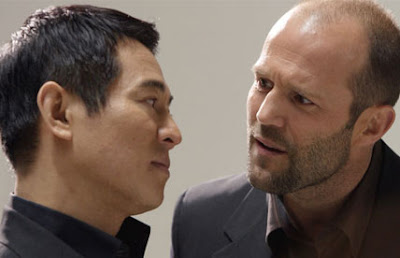 In 2007, Lions Gate released War, which pits Jason Statham against the Jet Li in a bloody extravaganza of epic drivel. I should have known not to go see this film because the studio did not allow reviewers to see it early, but I went, suffered, and nearly fell asleep several times, even as the sound of gunfights would occasionally jolt me awake.

Up until now, I usually liked Jason Statham’s work. He has never starred in anything especially good, but in his B movie world of action flicks, he knows how to clench his jaw and evade bursts of machine gun fire with proper nonchalance. I admit to a weakness for the Transporter series, in part because they were written by Luc Besson, an excellent French director, and also because they combine wit, visual flair, and playful violence. With his British accent and his Bruce Willis squint, Statham somehow manages to make male pattern baldness look cool. In his most recent film, Crank, Statham needed to maintain an adrenaline rush to not die from poison, but in its amoral way that movie had giddy moments when he would deliberately crash a motorcycle while dressed in a hospital gown, gobble down speed pills, lick cocaine off the floor, or jolt himself with a defibrillator to keep his heart functioning.

In War, however, Statham plays FBI agent Jack Crawford, who is drearily obsessed with avenging the murder of his partner Tom Lone (Terry Chen). Jack waits three years for the possible killer, a mythical Rogue (a serene-looking Jet Li) to resurface in the underworld of Chinese and Japanese mob bosses. At first, the Chinese Triads and the Japanese Yakuzos get along just fine, but then Rogue infiltrates a go-go bar and ties a bomb to the collar of a Doberman guard dog, thereby blowing up some of the Triads. This action earns him the support of the mob boss of the Yakuzos, but then he lures a bunch of them underneath the spaghetti freeway at night with his motorcycle, and then shoots them down.

Basically, the Rogue uses the time-honored technique of Clint Eastwood’s gun slinger in A Fistful of Dollars. By playing to both sides of rival gangs, he can kill with impunity and profit from each mob’s attempts to get him to side with them. When someone claims that the Rogue has betrayed one side, he just says “I have no master.” For those who come to see Jet Li’s martial arts skills, he shows off precious little of them, perhaps to save himself the trouble. As the bodies accumulate, Jack Crawford traces the Rogue’s movements by keeping track of his fancy titanium bullet shells.

I did like one scene where Japanese model Devon Aiko’s character threatens two uppity thugs in her mobster dad’s gang by placing a knife to the throat of one and a gun to the forehead of the other, and then calmly asking for a chef salad without the blue cheese. Otherwise War grimly accumulates on the screen with its badly staged gunfights, car chases, slow motion overhead tracking shots of city streets, and clichéd dialogue. For example, when she finds the gangsters threatening her family, Jack’s wife throws a fit and tells him “I tried to do the right thing. Make a good life. I’m not even mad at you anymore. Most days I just feel sorry for you.” In turn, Statham just acts like an enraged FBI brute, banging men’s heads into urinals, and strangling the chief of police with the bathroom door.

If I were an FBI agent, I would compose an angry letter to Lions Gate. If I were a member of the Chinese Triad, I would definitely write a strongly worded note to the same studio, demanding proper representation in cinema. Even ruthless killer drug lords deserve better.