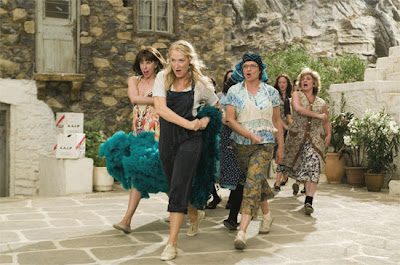 Few can comprehend, none can know the sheer dread, loathing, panic, and horror I experienced while viewing Mamma Mia! The afternoon began calmly enough. We drove to the Cineplex, got out, met up with one of our female friends, and entered the theater. Once inside, I noticed that I was only one of two men in the place, but I remained calm, made a joke or two about the estrogen in the air, took out my notebook, and prepared to take notes. Then the full horror began.

At first all I could hear was squealing. Various younger women jumped and screamed as they met on a sunlit dock. Sophie (Mean Girls’ Amanda Seyfried) excitedly told her two friends of finding her mother’s diary which indicated, mostly through ellipses, of three tempestuous affairs roughly nine months before Sophie was born. Much squealing and one Abba song later, we learn that Sophie invited three possible fathers to her wedding on the fantasy backlit , thereby creating a plot. The three fathers could be Pierce Brosnan (Sam) or Colin Firth (Harry) or Stellan Skarsgard (Bill).

One might think that the storyline would continue in its Shakespearean comedic way to concern Sophie’s quest for her dad, but not really. As soon as the three younger women arrive on the island, Meryl Streep takes over as the aforementioned mother, Donna, who runs a small hotel on the island that isn’t doing so well. A handywoman, she wears overalls and fixes broken shutters, happy that her days of romance are over. Her two friends (the film likes threesomes) arrive--Julie Walters (as the cookbook-writing “lone wolf” Rosie) and Christine Baranski (as the occasion for several jokes about plastic surgery).

Naturally, once the men show, Sophie can’t tell who is her dad. That doesn’t matter because Donna’s every mood shift becomes another occasion to sing and dance to “SOS,” “Dancing Queen,” “Knowing Me, Knowing You” or some other Abba song with sunlit waves or an island paradise as backdrop. The unnamed peasant Greek people serve as a chorus. I never minded listening to Abba in small doses in the past, even though Muriel of Muriel’s Wedding (1995) does characterize excessive Abba-listening as a kind of disease for women who refuse to snap out of their dancing-queen-perpetually-17 dream world. But there was something alarming about watching a bunch of middle-aged women frenetically gesturing, writhing, and undulating around on screen to 30 year old Swedish pop music at length. What was this? Some sort of female boomer revenge? Was Streep trying to take back the ingénue role from Sophie, steal the spotlight, and boogie her way into camp stardom?

Part of the pain of watching the film came from the fact that I liked Streep in The Devil Wears Prada. There, she embodied stylish power and intelligence. Her understated acting craft and withering putdowns of everyone in the film seemed long overdue. I also saw Streep play a much more lackadaisical musician type in the A Prairie Home Companion, and her role in Mamma Mia! is much closer to that one.

But when Streep suddenly appears during one of the songs on the prow of a ship, dressed to the nines in a long flowing gown, I wondered . . . Donna as Rose on the Titanic, or is this the Love Boat? When, after dancing around on the dock, Streep and her extras fall into the water, are they recreating the high school pool scene in It’s a Wonderful Life? Aside from reveling in “Super Trouper” and “Gimme! Gimme! Gimme!” one last time, Streep shows that, at the age of 59, she can be anything she likes--the mom and the ingénue--and romance a former James Bond in the process, and I guess I shouldn’t begrudge her that, but her methods! She shows that baby boomers will not go quietly into that good night, but I prefer Streep in her devilish dignity dressed to the nines in Prada to all of this post-menopausal Girls Will Have Fun dancing around like deranged older hippies. Too much arch camp and goony middle-aged boogieing smacks of desperation to me, not joy no matter how much “Take a Chance on Me” rises to a crescendo in the background.

Late in the film festivities, water gushes from a crack in the villa, soaking all of the dancers in slow motion. Someone shouts out “the spring of Aphrodite”! But it looked more to me like the film’s real goal—the Fountain of Youth.

bd said…
Oh Mr. Film Dr! We just got back from seeing it and are still smiling. I consider half of my ticket the price well paid just to see Pierce Brosnan grunt out SOS with every vein around his eyes bulging from the effort.

This film is nothing but a romp that never for a moment takes itself seriously. As well it shouldn't... if you try to craft a story around a 70's pop band's songs, you're dooming yourself to some disjointed moments.

But what a hoot. We haven't had so much fun at the movies since Hairspray!

BTW: Similar to your experience, I was the only male in the audience Tuesday night, and I too made jokes about estrogen in the air. The estrogen-emitters were too deep in their after-glow to frown at me.
July 22, 2008 at 11:17 PM

The Film Doctor said…
You are still smiling (?!), or are you pretending to be smiling for your wife's sake? Perhaps I lack the proper gene to appreciate camp musicals with intergenerational issues.
July 23, 2008 at 8:11 AM