The US Marshal gets her man: Steven Soderbergh's Out of Sight (1998) 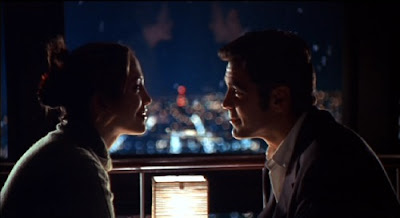 [11 years ago, in a small theater in Carbondale Illinois, I happened upon a little-known and under-promoted film while writing for a local Arts newspaper, and I was very impressed.  Out of Sight has since become my favorite of Soderbergh's directorial efforts.  It shows Clooney's potential to become a genuine movie star.  For that matter, has Jennifer Lopez been in anything better?  Here's my time-capsule review.]
Ever since the success of Get Shorty, Hollywood has rushed to adapt any remaining Elmore Leonard material to the screen.  His streetwise dialogue, macabre sense of humor, and well-researched crime details have moviemakers translating his work to the big screen with devotional fervor.  A master crime novelist, Leonard has cranked out a thriller a year for who knows how long (Paul Newman's Hombre was adapted in 1967).  His stories usually involve a misfit band of criminals and one lone law enforcement officer.  Quentin Tarantino adapted and directed last winter's disappointing Jackie Brown.  Now, Steven Soderbergh (sex, lies, and videotape) trumps Tarantino by directing the superior Out of Sight, based on the 1996 novel of the same name.
Here, George Clooney plays Jack Foley, a likably smarmy bank robber who escapes from a Florida prison only to stumble across U.S. Marshal Karen Sisco (Jennifer Lopez) out in the parking lot at night.  His accomplice, Buddy Bragg (Ving Rhames) grabs her from behind and then kidnaps her by placing her with Jack in the trunk of his car.  Thrown together in this meet-cute way, getting to know each other, as it were, across the gulf between the criminal and the law-enforcing, Jack and Karen strike up an unlikely rapport, discussing movies like Bonnie and Clyde and 3 Days of the Condor.
In the old Hitchcock film The 39 Steps, the romantic leads were handcuffed together.  Here, they share an airless but cozy ride in the trunk of a Ford.  Later, Karen will whip out a huge Magnum pistol and try to shoot her way out of the trunk, but the die has been cast: they will spend the rest of the movie looking for a "time out" from cops and robber games to get to know each other better.
While Clooney's acting has improved by simply refraining from waggling his head in false modesty, Lopez shows she could project torrid sensuality dressed in a feed sack.  Her character blends movie star glamour with the kind of federal marshal smarts that Tommy Lee Jones displayed in The Fugitive.  If men try to mess with her, she produces a retractable metallic wand out of her purse and thwacks them across the arms or pistol whips them before handcuffing them to a balcony.
For the most part, Out of Sight is masterfully done, provided you have the patience for character development.  Elmore Leonard characters tend to talk too much at times, a trait that works better on the page than on the screen, but otherwise Steven Soderbergh sets up scenes with auteurish finesse.  He mixes up the chronology much like Tarantino did with Pulp Fiction, throwing in a little flashback jailhouse exposition midway through to keep us off balance, teasing us with a little asequential crosscutting during the major seduction scene. He also likes Martin Scorsese freeze frames and Godardian jump cuts.  Moreover, Elliot Davis' cinematography impressed me with its tacky orange glow in Florida and the moody wintry blues in Detroit.  Did I mention the strong supporting roles by Albert Brooks (a Wall Street crook), Don Cheadle (a murdering creep), and Steven Zahn (a bumbling pothead)?  Did I say that Danny Devito helped produce, and Samuel L. Jackson shows up for one scene?  That this might be the most passionate movie of the summer?  Elmore Leonard never had it so good.
Labels: Out of Sight

Kevin J. Olson said…
This is great stuff. I remember watching this film countless times on DVD, because sadly, I missed this one in theaters. I remember fondly for being one of my very first DVD purchases and eating up all the great extras that were rare for DVD's at the time. The commentary by Soderbergh is a treat as he lists all of his French influences.

I'm glad you mentioned Albert Brooks and Don Cheadle, two great actors who steal the show with every hilarious scene they share (the scene where they discuss the value of a pillow and some eye drops is one of the funniest exchanges in all of film). Also, this may be one of the few movies where I wasn't completely annoyed with Zahn's acting.

The cutting here is fantastic (specifically the "sit down" scene where Karen and Jack assume different identities for one night. It's a surprisingly sweet scene), as is the Detroit cinematography which was the spawn of Soderbergh's affinity for shooting locales with specific filters.

And yes, it's sad that the promise of J'Lo's acting skills never came to fruition. She was quite good here.

Unknown said…
This is quite possibly my fave Soderbergh film of all-time. While it may not have the dramatic weight of TRAFFIC or CHE, it moves along at an entertaining, effortless clip. It is also quite possibly the best Elmore Leonard adaptation as well (just edging out GET SHORTY).

What a great cast with everyone firing on all cylinders. Is it just me or does Albert Brooks not work enough? It's a shame OUT OF SIGHT didn't do so well because he shoulda got a ton of work based on his performance. Oh well...

As for J. Lo, she strikes me as someone who needs a strong director to guide her performance or her ego takes over and she runs over everyone. Along with this film, I think that BLOOD & WINE is another strong performance by her and again, she was working with a strong, veteran director at the helm.
April 30, 2009 at 4:10 PM

Richard Bellamy said…
Yes, I remember this movie. I especially remember J'Lo's very short skirt in the scene in which she is thrown into the trunk with Clooney, but I also remember the film as a stylish, entertaining thriller. And I agree - this is Lopez's best performance.

I enjoyed your well-written review out of the past.

I agree that Soderbergh sets up scenes "with auteurish finesse." But, for the most part, his auteurish skills do not get in the way of the story.

It would be interesting to challenge, say, Soderbergh, Wes Anderson, Tarantino, Paul Thomas Anderson, Spielberg, and Scorsese, each to make a film in a randomly chosen genre: thriller, Western, science-fiction, etc., with the same budget and a limit of 120 minutes. Who could make the most effective film? Whose ego and/or style would get in the way?
April 30, 2009 at 7:38 PM

The Film Doctor said…
Thanks for your insights, Kevin, J.D., and Hokahey,

I didn't mention how much I like many of Soderbergh's other films such as Bubble and The Limey, but Out of Sight lingers in my mind because it has both movie star glamor and edgier cinematic technique (not to mention Elmore Leonard wit). Wasn't Zahn establishing his stoner persona at that time? That may explain why he's less annoying.

Of the directors you mentioned, Hokahey, I doubt that Wes Anderson would have the flexibility needed for such an assignation. I think I've liked Soderbergh since sex, lies, and videotape because he seems to emulate the best New Wave directors
May 1, 2009 at 8:24 AM

Unknown said…
"Wasn't Zahn establishing his stoner persona at that time? That may explain why he's less annoying."

My fave Zahn performance is as a stoner in the little-seen FREAK TALKS ABOUT SEX that pops up on cable every so often and was released on DVD under the horrible title BLOWIN' SMOKE. He's great in it and the film has a kind laidback narrative that, if you're in the right mood, is very entertaining.
May 1, 2009 at 1:32 PM