Cinderella, Tiana, and Disney's abysmal history: 8 notes on The Princess and the Frog 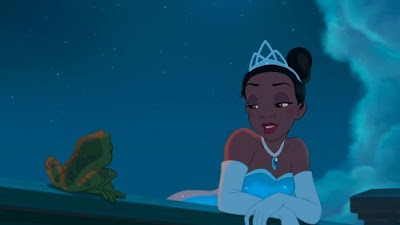 "We have no obligation to make art. We have no obligation to make a statement. To make money is our only objective." --Disney CEO Michael Eisner's internal memo
"I mean, really, Ariel gets a calypso-singing crustacean, Cinderella has mice that can sew, and the black princess gets a raggedy half-toothless firefly – when she isn’t spending the movie being the animal sidekick herself." --Shannon Prince
"The Princess and the Frog couldn’t just be a movie. It had to be a moment, complete with tie-in merchandise carefully trotted out well in advance of the premiere: The Dress! The Doll! The Hair Products!Given all that, Disney’s first princess in 12 years has a lot to live up to. And its filmmakers tread a fine line between attempting authenticity and keeping the fantasy alive. This being Disney, there are certain tropes that must be in place: Spirited Heroine sets out on a journey. Encounters all sorts of travails along the way, travails which will prompt her to break into song. Animal friends help her in her journey; they, too, can’t help breaking into song. Handsome, often cross-cultural, prince pops up, but evil forces conspire to keep them apart. He sings, too. Back in the day, the Handsome Prince usually saved the day, but this being 2009, the Spirited Heroine generally gets to save the day—and Handsome Prince—thereby actualizing her own Inner Princess. The Handsome Prince and the Actualized Princess hook up; live happily ever after, etc., etc." --Teresa Wiltz
"LaToya Peterson, editor of the website Racialicious.com — which has been tracking much of the controversy surrounding The Princess and the Frog — says that she is hopeful and sceptical when it comes to seeing the movie. `I`m hopeful because Disney was so quick in making changes to make sure the portrayal of a black girl is a lot less stereotypical,' she says from her office in Washington. `Then again, Disney has such an abysmal history of representing characters of colour. I mean, they’re usually represented as animals.'" --Chris Ayre
"Who wants a puppy?" --Big Daddy La Bouff (John Goodman) in The Princess and the Frog
1) What exactly is Disney's abysmal history in terms of its depictions of race? Cracked.com provides a nice eye-opening summary.
2) What are some of the changes made to Tiana's character (Anika Noni Rose) in the course of making The Princess and the Frog? During the movie's composition, the writers at first depicted her as maid, but in in the movie's final incarnation, she's a waitress/aspiring restaurateur for much of the movie. Also, her original name was Maddie, but that name was changed as it was seen as being too close to Mammy. How else did Disney seek redemption? They visited with Oprah three years ago, sought her approval, and gave her the part of Tiana's mother Eudora.
3) I confess that I liked much of The Princess and the Frog, in part because I could sense the corporate media behemoth squirming as it tried to distance itself from its usual evil ideology.
4) If you study different versions of the Cinderella myth, you learn how Cinderella used to be wily, self-sufficient, and humorously conniving in her efforts to get the prince, that is, until the official Disney Cinderella came along in 1950. Disney's Cinderella passively waited around until a bumbling fairy godmother, some hard-working animals, and a handsome prince catapults her effortlessly to royal status. Now we have the Cinderella complex, popularized by Colette Dowling, which, in the words of the Wikipedia article on the topic, "is based on the idea of women that the story portrays, as being beautiful, graceful and polite but who cannot be strong independent characters themselves (although Cinderella does exhibit independence based on her skills and determination), and who must be rescued by an outside force, usually a man (e.g. the Prince)." Given the parallel existence of the Peter Pan syndrome, one wonders how much Disney's sugary example has messed up millions of boys and girls for life.
5) In contrast to the Disneyfied Cinderella, Tiana makes it very clear that she's willing to work hard to obtain the restaurant she wants in 1920's era New Orleans. So she waitresses and saves her tips in cans until she can raise the down payment on a beat-up old building. She's so intent on getting as she says "what you want through hard work," Prince Naveen (Bruno Campos) chides her for being a "stick in the mud" when they are both frogs. He says "You do not know how to have fun," but she proves him wrong when she helps defeat some frog-hunting rednecks. I imagine Disney animators included the 3 Stooges-esque rednecks to counterbalance any charges of stereotyping attached to the snaggle-toothed Cajun firefly named Ray (Jim Cummings) who says things like "follow the bouncing butt" before breaking into song. 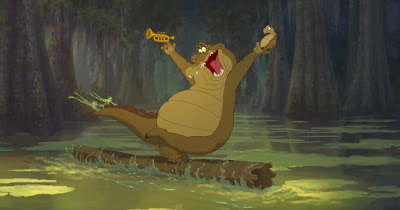 6) Given Disney's tendency to lazily plagiarize from or allude to its earlier movies, what is the major influence of The Princess and the Frog? I think The Jungle Book. Once the storyline shifts to the Bayou, Louis the lovable jazz horn gator (Michael-Leon Wooley) reminded me of Baloo the Bear crossed with Louis Armstrong. The animators acknowledge the debt to The Jungle Book when Mama Odie shows up sporting Kaa, the snake as her helpmate.
7) I am a huge fan of New Orleans, and The Princess and the Frog revels in the city's rich cultural traditions. I liked all of the references to beignets, Mardi Gras royalty, gumbo (although Tiana repeatedly only needs to add two squirts of Tabasco to save any problematic gumbo in the film), Sidney Bechet, voodoo, the city's celebrated graveyards, and zydeco music.
8) Does The Princess and the Frog help the Disney corporation make amends for its abysmal history? Not entirely, but I found it entertaining to see them try. As long as they profit on the "spectacle of innocence," it's gratifying to see some signs of conscience, signs of guilt. Tiana's knowing, slightly ironic stance in the film calls attention to the underlying hypocrisies of Disney's usual song and dance.
Labels: The Princess and the Frog

Jason Bellamy said…
Terrific roundup of links, and great thoughts. I'll see this eventually, but I didn't have it in me to go on opening weekend. I did see some young black girls dressed in princess attire at the theater. That was a reminder that there will be some good in this, even if it isn't all good, even if it's too little good too late.
December 13, 2009 at 4:48 PM

Sam Juliano said…
I gave this 3 1/2 of 5, and that was being generous. The story just didn't have it--too slight and emotionally distancing, and Randy Newman's music was god-awful. But admittedly the jazzy context and the dazzling animation lifted it some, though it's nowhere near UP or FANTASTIC MR. FOX to these eyes. Great work here as always as Jason notes.
December 14, 2009 at 12:00 AM

The Film Doctor said…
Thanks, Jason and Sam,

It occurs to me now that I could have evaluated the movie more, but I ultimately found Disney's unease with its own brand more interesting than the quality of the film itself. Disney's desire to profit from its princess franchise combined with its awkward attempts at political correctness in Princess and the Frog make for a much more thought-provoking mixture than one usually finds in a kids movie.

Also, I agree, Sam, that Fantastic Mr. Fox and Coraline overshadow the film in the same way that more playful Indie efforts can dog a corporate behemoth's standard product.
December 14, 2009 at 5:08 PM

Richard Bellamy said…
FilmDr. - Well done. I can see how this is a redemptive and risky venture for Disney - to make up for stereotyping in films like Song of the South.

I will see this soon - but from the preview it looked like a compilation of allusions/self-tributes to previous Disney animated features -first by going back to the classic hand-drawn animation. Cinderella is clear - and your call on the The Jungle Book is a good one. To me, however, the alligator looked more like a crocodile and seemed reminiscent of Fantasia. Also, my students said there's a little deer - Bambi? Also, the villain looks like Jaffar from Alladin.
December 15, 2009 at 11:56 AM

We've browsed through your reviews and thought that they are really original and interesting! We would like to invite you to publish your reviews on 7tavern.com, which provides an alternative platform for promising movie reviewers to showcase their talents. Based on the merit of your reviews, we believe that you would be an exceptional addition to our community.

Please feel free to contact us to discuss how you could become a 7tavern reviewer. =)

Joel Bocko said…
Interesting notes. I think Disney's balance of corporate greed with attempts at a politically correct agenda has been going on for a while now (with varying degrees of success) and the controversy over this film reminds me of the controversy over Pocahontas nearly 15 years ago. About 15-20 years ago I think political correctness became an essential part of the corporate landscape (it's just good business - unless your aim is to be "subversive" like South Park; an interesting - if not necessarily dishonest - reversal of the way it used to be, when puncturing stereotypes was itself potentially subversive). It's one reason I feel a lot of leftist cultural critiques have become outdated, at least from what I've read - there are often several elements going on at once: economic conservatism & cultural conservatism don't really seem to go hand-in-hand.

Haven't seen the movie - Disney had another hot streak that peaked right before computer animation hit the scene and it hasn't really been the same since, with diminishing returns year by year, at least from what I've seen. Too bad, as I don't see why CGI should necessarily negate old-fashioned animation (except, perhaps, that it's easier? don't know enough about animation to say...) But then, I feel that way about a lot of technological "advances."
December 15, 2009 at 7:45 PM

The Film Doctor said…
Good points, Hokahey. I would like to know what connections you can make with previous Disney films after seeing this one. I wonder if perhaps Disney suffers from the burden of their back catalog. They have so many successful traditions, it must be hard to break out and try something different (or not as obviously profitable).

Thanks, 7tavern.com. I'll consider your offer.

Thanks for your thoughts, Movieman. I agree that there's no reason why old fashioned animation shouldn't continue to produce great movies. Anderson proved that stop-motion animation worked just fine (if not better) for Fantastic Mr. Fox.

By the by, here's another fun link placing Disney's princesses in weird contexts:

Clarabela said…
This is a great collection of links offering different opinions about The Princess and the Frog. I thought it was a cute movie and did a good job of depicting the first Black Disney Princess. I also liked the way Tiana didn't think wishing alone would get her what she wanted. But dreaming along with hard work. That is a good lesson for young ones to learn.
December 18, 2009 at 12:44 AM

The Film Doctor said…
Thanks, Clarabela. I agree that Disney did a good job in depicting the first African American princess, but I still find The Princess and the Frog ironically tinged with echoes of the corporation's past. Here's another link emphasizing Disney's sexist side:

Anonymous said…
Very interesting discussion. I recently completed a dissertation on the reception history of Song of the South, and I blogged about Princess a while ago:
http://lightpalimpsest.blogspot.com/2009/12/politics-of-princess-and-frogs.html
I made some of the same points, regarding how no matter how "positive" the new film might be textually, its very presence always reactivates Disney's longer corporate legacy in public consciousness.
December 19, 2009 at 8:44 AM

The Film Doctor said…
That's fascinating, Jason. Thanks for your input. I'm on vacation now, but I will reply more soon. Will we get to see your dissertation in published form?
December 21, 2009 at 10:46 AM