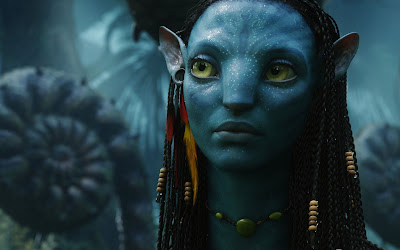 ---The digital future of magazines
---Avatar's feminist side
---The evolution of horror movie poster design
---The Princess and the Frog comparative analysis
---9 films that influenced Inglourious Basterds
---The noughties and our yearning for chaos:
"One of the most striking things about the Noughties is that when terrible things did happen – when planes really did start falling out of the sky – we greeted them with barely concealed excitement.We watched them being replayed over and over again on CNN, drinking in the wild overestimates of casualty numbers and nodding along enthusiastically as experts confidently predicted all the cataclysmic consequences to follow. It was a form of mass hysteria – something akin to Freud’s death wish, but writ large.If the past 10 years had one defining characteristic it was that they allowed human beings to give full expression to their yearning for chaos, one of their darkest unconscious desires. It was the decade in which people’s appetite for destruction became almost insatiable.I don’t mean that an above average number of natural disasters occurred – though, God knows, we had our share, what with the south-east Asian Tsunami and Hurricane Katrina.Nor do I mean that the past 10 years witnessed a significant increase in acts of terrorism or that many of them were perpetrated by suicide bombers in thrall to a sinister death cult.Rather, it was the way these phenomena were latched on to, the apocalyptic fantasies they gave rise to. It was as if people wanted the world to be consumed in an orgiastic frenzy of ultra-violence, whether at the hand of Mother Nature or an Islamist cell in possession of a ‘dirty bomb’."
---Top shaggy dog films of the 00s
---The difficulties of defining mumblecore
---Perhaps the most important movie out there
---The decade-defining romance of Mulholland Drive
---Dan North explains the reveal
---Fantastic Mr. Fox links
---"Pop Ate My Heart": Lady Gaga analyzed:
Lady Gaga does not abandon the visual component of her music. Rather than the videos being ancillary products designed to promote the music, Gaga treats the tracks on the album as equal opportunities for visual expression. This is a one of Gaga’s principal aims as an artist; she has said that “It's the artist's job to create imagery that matches the music—something powerful that will really grab the audience and create a memorable impression,” and claims that

"What has been lost in pop music these days is the combination of the visual and the imagery of the artist, along with the music—and both are just as important. So, even though the carefree nature of the album is something that people are latching onto right away about my stuff, I hope they will take notice of the interactive, multimedia nature of what I'm trying to do. The things I like to do and the theatrics, I like to incorporate them into the choreography. With my music, it's a party, it's a lifestyle, and it's about making the lifestyle the forefront of the music."
---Celebrity, Academic Style's decade review
---Remembering Kurosawa
---Mad Men reinvents men's fashion
---Lastly, early David Bowie
Labels: Notable film and media links

The Film Doctor said…
Thanks, Sam. I liked Avatar too. I might write my review while eating an Avatar Big Mac meal at McDonalds.
December 21, 2009 at 10:44 AM

christian said…
Lady GaGa is ga-ga. Great music creates imagery in your head. No need to spell it out in videos.
December 22, 2009 at 3:32 AM

The Film Doctor said…
Thanks, Christian, but I think music videos can be an excellent art form in the hands of Spike Jonze, early Madonna, Talking Heads, Nine Inch Nails, Blur, etc. I like Lady Gaga's decadent fin de siecle Helmut Newton-esque ambiance in videos like Paparazzi.
December 24, 2009 at 10:58 AM