The future will be inane: quotes and links concerning We Live in Public 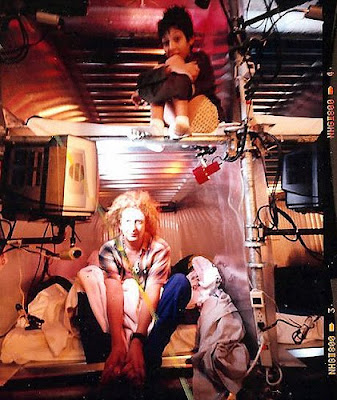 “One day we’re gonna wake up and realize we’re all servants.”
"Lions and tigers used to be kings of the jungle and then one day they wound up in zoos. I suspect we're on the same track."
---Josh Harris
“Your reality is already half video hallucination. If you’re not careful, it will become total hallucination. You’ll have to learn to live in a very strange new world.” – Brian O’Blivion in David Cronenberg’s Videodrome (1983)
"Remember Jenny Ringley? She was the pioneer of Webcams. From April 1996 until 2003, she lived her life online, getting, it was said, tens of millions of hits a week. She never discussed why she shut down Jennycam. Today, she says she doesn't even have a MySpace page. And Josh Harris says Sidamo, Ethiopia, is the best place on Earth to live: "People know each other here."
---from Roger Ebert's review of We Live in Public
"The more you get to know each other, the more alone you become."
"The freeness is turning people into beasts."
---participants in Quiet: We Live in Public
"Last month, we introduced you to (or reminded you about) Josh Harris, once-upon-a-time internet entrepreneur and star of the award-winning documentary We Live in Public. Around the turn of the millennium, Harris was known for coordinating some pretty bizarre social experiments, like getting 100 people to live in a bunker under 24-hour camera surveillance. He then turned the camera on himself and his girlfriend, broadcasting their lives over the Web--which eventually led to his nervous breakdown. We Live in Public captures it all, illustrating Harris's rise and fall in a fascinating cautionary tale about our use of the internet.
---Stephanie Schomer, writing for Fast Company
"The most mind-blowing project he masterminded was “Quiet”: an underground bunker in downtown Manhattan filled with hundreds of cameras and bunk bed pods. He invited about a hundred New Yorkers to live there in December 1999. Everything was free: food, alcohol, drugs, a firing range (!), shelter. The only catch was that residents of Quiet were filmed at all times — in their pods, in the shower, in the bathroom, etc. etc. And that film would belong to Harris.

The film presents this as a revolutionary idea, and fails to acknowledge the existence of MTV’s Real World, broadcast in 1992 and predating this experiment by seven years. Quiet was different though in its sheer numbers — 100 or so people rather than the handful on MTV’s series — and because of the constant broadcasting of the camera feeds. There was a TV in every bunk bed pod and throughout the bunker so residents could watch each other, while being watched.

As depicted in the film, and as one might expect, chaos ensued."

"The centrepiece of this is the Big Brother-with-guns-and-psychological-torture installation that drew Timoner into a close working relationship with Harris in 1999. For thirty days a group of 100 extroverts drove each other insane, incarcerated in an extensively surveilled warehouse, constructed to seem like a cross between a cult bunker and concentration camp. This is taken as a 'physical metaphor' for our present menagerie culture of online blogging, profiles, social networking and the inexhaustible desire to publically broadcast our lives. 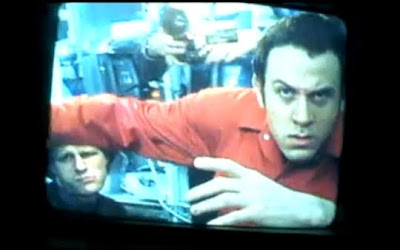 As a story basically chronicling the downfall of Harris as the "smartest guy in town", there are shades of Alex Gibney's Enron documentary; also perhaps of Capturing the Friedmans in terms of the obsessive self-documentation of its subject (Harris filmed a sizeable chunk of the 5000 hours worth of footage used to create the film). But, like Timoner's much lauded DiG!, this is far less multi-faceted and more the tale of the apparently brilliant but ultimately marginalised outsider. When he installs motion tracking cameras in his house to star (along with his girlfriend) in his own reality soap-opera, we realise that the real metric to his downfall isn't economic or criminal but in the dwindling numbers of voyeurs subscribing to his online feed. "That combination", he remarks with tragi-comic timing, "is not designed for mental stability and happiness."As someone previously unintroduced to Josh Harris, a layer of the film's intrigue stemmed from the question of whether - as the 'cautionary tale' for our times - it might also be an exercise in aligning the past with the present: a retrospective act in consolidating his myth. Was Quiet: We Live In Public (the title of the bunker installation) a coded message waiting for history to catch up with it - or a stunt quite in key with the then burgeoning development of the reality television format? Was Harris's early song and video 'Launder My Head' a Cassandra-like reveal of "the future of media and the collective consciousness", or a goofy animation of dancing computer monitors? Regardless, whether Timoner articulates a bona fide 'vision' or not, We Live In Public is certainly an eye-opener."
---Dean Sobers' review in The Quietus
"While Harris' intentions were clearly skewed towards provocation I'd prefer to linger more on the idealistic undertones, or the possibility of extending people so far beyond their limits that they began to blend into each other. Familiarity, while in some cases bred contempt, also contributed to a breakdown of selfhood as everyone adjusted to the idea that their lives were not sacred or theirs to keep, they were for everyone to see.

Relinquishing privacy meant the weight of your identity was shared by those around you, you were on equal footing with the other inhabitants - you were shared between and among them, divvied up into sound bites and images strewn across a vast network of monitors."
---Meganmay
"Mr. Harris invited Ondi Timoner, the director and writer of We Live in Public, to shoot the experiment, which explains the wealth of images in this movie. Some of the more disturbing ones invoke the bullying techniques of discredited self-help groups like EST. The bunker itself suggests a wired version of a model prison designed by the 18th-century British philosopher Jeremy Bentham that he called the Panopticon, which allows a guardian to watch inmates who, because of the structure’s design, can never see that they’re being observed. This constant surveillance would become an instrument of control because the prisoners, not knowing if they were being watched, would, out of uncertainty, behave as if they were. Not surprisingly, Bentham’s design has become a favorite metaphor for life in the surveillance age."
---Manohla Dargis
"I tend not to have particularly intimate relationships," Harris admits. Although people consider him a genius and an visionary pioneer of the internet, others consider him delusional and self-absorbed. In fact, in a documentary that included many disturbing images, one of the ones that bothered me the most was Harris' alterna-identity, "Luvvy", a strangely creepy clown avatar that he used to transform into for interviews and business deals. It was a weird regression to a child-like state, and it drove home just how socially alienated Harris was...and just how socially alienated we all may become? I desperately hope not."
---Daniel Getahun

"After the cops shut the project down, Harris soon embarked on another endeavor: he fit a loft with 32 webcams that would broadcast he and his girlfriend's day-to-day life. After changing the way she and Harris interacted — we behave differently for an audience than we do in private — the venture ended in a breakup, as well as depression, paranoia, and bitterness.

Obviously, the point is that this is how our own YouTube Twitter MySpace obsession ends — with a mean and implosive bang. Harris was testing the extremes of these technologies before most people were even using them at all — looking at what the end of Web 2.0 would look like while the rest of us were clicking through HTML fansites on 28.8K modems. He foresaw how the Internet would encourage our worst self-promotive fantasies. In tweaking Warhol's dictum that everyone wants 15 minutes of fame in their lifetimes, Harris declares that "people want 15 minutes of fame every day" — a way to transform the meaningless and mundane into cause for celebrity. (It's like "getting on to Carson" for sheer gall, without the talent that was once requisite to do so; as such, Harris presaged not only social media and interactive websites but also Jackass and Paris Hilton.) Timoner (DiG!) may make the connection too blatant at times, and she certainly overscores the film — most eye-rollingly when she uses "Virtual Insanity" as the end credits theme — but, with plenty of footage shot over a decade, she also offers a prophetic glimpse into the madness to which our Facebook profiles are likely to lead us. That's something we could just read about. But it's much more convincing actually to see it."
---Henry Stewart writing for The L Magazine
Labels: We Live in Public