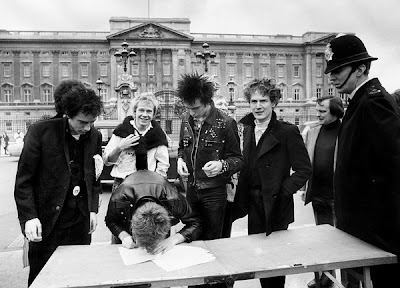 ---Tarantino versus the Coen brothers
---our overstimulated world: Kapitaal
---Malcolm McClaren: This much I know:
"I always said punk was an attitude. It was never about having a Mohican haircut or wearing a ripped T-shirt. It was all about destruction, and the creative potential within that. It turns out that the bankers may have been the biggest punks of all; they were making punk investments. Julie Burchill apparently once said, of her generation, that they were all McLaren's and Thatcher's children. That conjoining may have been more prescient than she realised. But I think this is a transformative moment. We're at the end of the culture of desires; we may be going back to a culture of necessity."
---punk Wes Anderson
---Roger Ebert writes for Malcolm McClaren:
"Day after day, I pounded at the typewriter as Meyer and McLaren went out on business meetings at 20th Century-Fox and then returned, Meyer expecting many more pages, McLaren unconcerned, as if screenplay wrote themselves. In the evenings, Russ and I dined in restaurants serving large forms of meat, while we outlined the next day's material on yellow legal pads. This had also been our method on BVD. We rarely knew more than a day ahead what would happen next.Finally I arrived at the end:AN OVERHEAD SHOTshows his prone body on the floor in the spotlight. The first and only person to move is Johnny Rotten. He walks slowly forward to the dead body. Looks down at it. Turns it over with the toe of his boot, so that the dead face gazes sightlessly skyward. Speaks so softly not everyone can hear.JOHNNY ROTTEN
(down at the body)
Will success spoil Johnny Rotten?
(pause)
No. He will waste, spoil, smash, blow up and destroy success!Another pause. The room is hushed. Johnny Rotten looks slowly up and directly into the camera.JOHNNY ROTTEN
Did yer ever have the feeling yer being watched?FADE TO BLACK
---punk on the big screen
---from Jonathan Franzen's 1992 novel Strong Motion:
"On the stairs Renee said, `The time to be a punk was fifteen years ago. It's just utterly embarrassing to try to be one now.'
`Anarchy is a very old idea,' he said,"
---Detroit disassembled
---Greg of Cinema Styles notes some problems with writing online as Harlan Ellison has some concerns about writers not getting paid
---John Lydon's butter ad
---"Wild Things": life in Kyrgyzstan
---Amerindie slumming:
"The history of American indie film happens to be dominated by lowlifes and inarticulates. This is what happens when the godfathers of independent film are John Cassavetes and Melvin van Peebles, both attracted to working-class sparks. Complaining about intelligent guys wasting their talents on "low-lifes" smacks of snobbery, but it also ignores the fact that American indie film is and always has been primarily oriented towards the marginalized, who aren't going to make movies about themselves, and certainly aren't about to be the stars of mainstream films."
---demystifying Jim Morrison
---Lydon's second butter ad
---Craig considers the life of Robert Altman:
"11. Despite what became his glowing reputation with actors, Donald Sutherland and Elliott Gould so hated working with Altman they tried to get him fired. Says Gould: "I think that, in hindsight, Donald and I were two elitist, arrogant actors who really weren't getting Altman's genius."
12. Although there is a great deal of fawning by many from Altman's ensembles in Zuckoff's book (too much of it, in my opinion), the most interesting reflections come from the contrarians. For every ten or twelve actors rhapsodizing how Altman made them feel "safe," there's a Julie Christie who, recalling her reluctant walk-on in Nashville, says that "Robert by no means got his way by being sweet all the time. He could be manipulative." Keith Carradine, Robert Duvall and Shelley Duvall echo each other's sentiments that the first time you ever turned down a part for one of Altman's movies (as Carradine did the lead for Buffalo Bill and the Indians, Bob Duvall did Haven Hamilton in Nashville, and Shelly D. did the female lead in A Perfect Couple), there was a good chance you'd never be asked to work with him again."
---the profoundly "bone-headed" Kick-Ass, a review by Dan North
---punk capitalism
---the black list of corporate villains
---lastly, the genesis of the original punk, Curious George
Labels: Notable film and media links