When Gods slum: 7 notes on Clash of the Titans 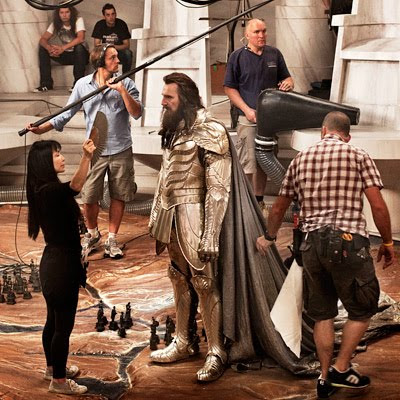 1) Once upon a time, back in 1993, Liam Neeson and Ralph Fiennes became movie stars in the Best Picture Oscar award-winning Schindler's List. Now they slum as clashing Gods in this year's remake of the 1981 Clash of the Titans much like two would-be Marlon Brandos duking it out on Krypton in Superman (1978). (IMDB claims that Neeson took on the role because "his sons are big fans of Greek mythology." I haven't heard Fiennes' excuse.) As Zeus, Neeson sports a very shiny suit of CGI armor as Fiennes refines his Lord Voldemort glower as Hades with long black greasy hair and a beard. Hades has been annoyed with Zeus ever since he tricked him into becoming leader of the underworld, so now Hades wants to release the Kraken on to some uppity humans down in Argos as part of his bid for more cosmic power.
2) Meanwhile, Zeus has a demigod son, a fisherman named Perseus (Sam Worthington) who could save humanity, but first he must visit some creepy witches and Medusa down in the underworld. Perseus gets the help of some soldiers, a magic sword, a flying horse, and Io (Gemma Arterton), who is fetching in an ancient-Greek-demigod-guardian-angel sort of way. Hades gives Perseus 10 days before the the unusually tendrilly and toothy underwater mega-turtle Kraken bubbles out of the sea to devour everyone. Will Perseus succeed? How many scorpions, goblins, and other assorted computer-generated mythological nasties must he fight off first?
3) Samples of the dialog: "You are specks of dust underneath our fingernails!"
---Hades hissing at the court of Argos
"If there's a god in you, be sure to bring it.'
---Draco (Mads Mikkelsen), one of the soldiers, after giving Perseus a fighting lesson
"The gods need US! They need our prayers! What do WE need the gods for?"
---famous last words of the Argos royalty
"I know we're all afraid, but my father told me some day, someone was going to have to take a stand. Some day, some one was going to have to say enough. This could be that day. Trust your senses, and don't look that bitch in the eye!"
---Perseus inspiring his fellow troops before confronting the Medusa 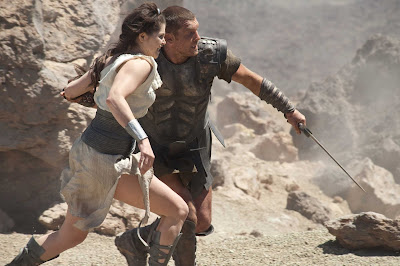 4) I understand why most critics have been panning this movie, but I found it bemusingly cheesy for CGI blockbuster fodder. I saw it in 2 dimensions at 11 am as part of my Sunday morning Easter service in a surprisingly crowded theater. Whereas the general predictability of Perseus' strivings got old after an hour or so (I found myself suddenly very sleepy when the 2nd, 3rd, and 4th monster scorpions appeared), Clash of the Titans has enough bizarre details to make it diverting viewing once.
5) For instance, in comparison to so many recent movies where God (if he exists) is either indifferent or hostile, the Gods in Clash of the Titans take a surprising interest in lowly human affairs. Zeus likes humans because their prayers "feed" his immortality (whatever that means), and even Hades cares enough to punish humans when they knock down a statue of Zeus. I also liked seeing the Gods standing stiffly in a circle on the cloudy illustrated diorama floor of Mount Olympus. Zeus tells all of the other Gods to go away before he can secretly say to Hades "Release the Kraken!"
6) Some other odd details: Did you know that the Medusa wears a black bra? That her lair combines cliffs, bent columns, lava, smoke, and atmospheric giggling? (The rest of the movie tends to overdose on generic rocky landscapes.) Did you know that Perseus' best fighting maneuver involves a flying leap as he twirls in the air? Did you hear that scorpions can wear bridles? Does it seem appropriate for Io and Perseus to indulge in some PG-13 demigod hankypanky in the hull of Charon's ship ferrying them to the underworld?

7) Lastly, princess of Argos Andromeda (Alexa Davalos), as she awaits the Kraken, gets tied to a sacrificial device exactly like one Naomi Watts dangles from in the 2005 King Kong. Humorously, Perseus has no particular interest in saving Andromeda since he's been flirting with Io for much of the movie, but he assumes his responsibility to deal with the released Kraken gamely enough. Someone has to do it.
Labels: Clash of the Titans

Richard Bellamy said…
You already know I enjoyed this movie - even while I see its many loopholes in logic. It kind of bothers me when a huge monster can be totally submerged in any body of water - the Kraken in a small cove in Greece - (and the monster in Cloverfield in the East River). But I guess anything can happen in a Greek myth.
April 6, 2010 at 7:52 PM

Yes, I know what you mean.

Thanks for the comment. I like the way the Kraken stirs up quite a bubble bath in that cove. Clash of the Titan doesn't seem tied to anything beyond a basic urge to supply the viewer with many CGI creatures and fight scenes. I noticed in the theater that mostly people in their 20s and 30s were watching. As they comfortably settled in, I wondered--are these the CGI spectacle moviegoers? What kind of atavistic impulse is at work here? I also wonder what this kind of film has to say about the state of masculinity and heroism today. Worthington comes across as a cheerful but inexpressive frat boy, dutiful enough, but lacking the range of a younger Mel Gibson. Likably blank, he may be designed to not upstage any of the monsters.
April 7, 2010 at 7:19 AM

Richard Bellamy said…
I know as a male that I definitely seek out movies featuring men involved in adventure - more the outdoor, classic type, less the modern-day type. And there's certainly something elemental about a Greek myth. A time when men were men, and gods were gods!

I specifically overheard audience members reminiscing about the stop-motion animation of Ray Harryhausen.
April 7, 2010 at 1:48 PM

The Film Doctor said…
Thanks for the link!

Here's a YouTube link to the skeleton fight scene itself: