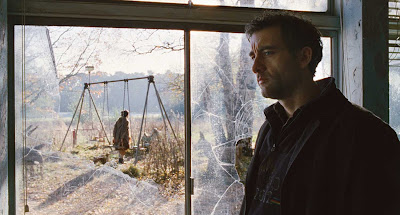 Two years ago today, the Film Doctor started posting reviews, including this one concerning Children of Men.
Some links:
---apocalyptic real estate
---Raquelle shares Robert Mitchum's appearance on What's My Line
---Cinetrix considers punk Islam
---media dependency
---futuristic communications with walls
---community-based filmmaking, The Cosmonaut, and Chuck Tryon's response
---the awkwardness of the overpopulation debate:
"Thus far, consuming via baby-making has been a no-judgment zone for most Americans, even the most "green" among us. Babies sure are cute. And creating a family is a complex, highly personal art. Many mothers I know say that having a child is the most miraculous experience they've ever had. Turns out, harsh as it sounds, that it's also one of the most environmentally irresponsible.

It's easy to understand why we don't weigh these public ramifications in our procreation decisions, but it doesn't make it right."

---Dan North and the Simpsons' trip to the moon

---the consequences of eating crap:

"A bit of historical context: The fast food industry was "revolutionized" and came to world dominance while Soviet communism was collapsing. And corn was the cornerstone of that revolution. In critiques of "our national eating disorder" that inspired the makers of King Corn, Michael Pollan observed: "If you take a McDonald's meal, you're eating corn . . . It holds together your McNuggets, it sweetens your soda pop, it fattens your meat . . . So when you're at McDonald's, you're eating Iowa food. Everything on your plate is corn." This is true of most fast foods and processed foods. One can begin to think about commercial U.S. culture as "corn-fed" in a broader sense: corn-fed culture has fueled the rise of a particular sort of American politics and economics during the "globalization" process. Vandana Shiva (1993) may describe the fast food empire as an imperialistic "monoculture." But for many U.S. citizens, the proliferation of McDonald's in Moscow and East Europe was proof of the "end of history" and a cause for triumphalist celebration. To be sure, McDonald's became a locus of considerable resistance: the French saw the proliferation of U.S. fast food chains as a threat to family farms and localized food cultures. But in a public sphere in which the interests of industrial food and American military might are often conflated, fast food franchises became a default symbol for freedom. American soldiers during the invasion of Iraq expressed dismay that the Iraqis had "nothing" in comparison to the liberating Americans, where even in the smallest of towns, fast food eateries were ubiquitous."

---lastly, Bellamy and Howard discuss Hitchcock's decidedly not minor To Catch a Thief

Dan North said…
Well done on making it to the two-year mark. Keep up the great work!

We must have started at almost exactly the same time, but I usually count my anniversary from when I set up camp at Wordpress. Unfortunately, that went live on September 11, so it seems insensitive to ask people to celebrate my blogging efforts....
May 19, 2010 at 7:09 AM

The Film Doctor said…
Thanks, Ibetolis. It has been awhile. I remember, back in the day, I used to write longer, more thorough posts under your influence. Thanks, Hokahey, Steven, Dan, and JUS.
May 19, 2010 at 12:44 PM

Jason Bellamy said…
Happy anniversary, Doc! Keep it coming...including the links! I always find something of interest.
May 20, 2010 at 8:34 AM