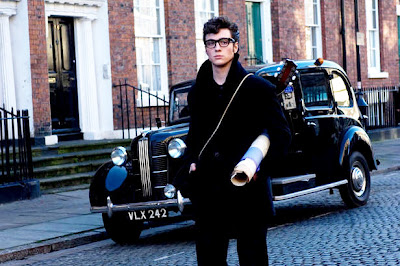 ---filmmaking in Beirut
---is it possible for Tom Cruise to act spontaneous?
---what happens to your brain distracted by the internet:
"Above all, Carr points to the past 20-some years of neurological research indicating that the human brain is, in the words of one scientific pioneer, "massively plastic" -- that is, much like our muscles, it can be substantially changed and developed by what we do with it. In a study that is quickly becoming as popular a touchstone as the Milgram experiment, the brains of London cab drivers were discovered to be much larger in the posterior hippocampus (the part of the brain devoted to spatial representations of one's surroundings) than was the case with a control group. These masses of neurons are the physiological manifestation of "the Knowledge," the cabbies' legendary mastery of the city's geography. The drivers' anterior hippocampus, which manages certain memory tasks, is correspondingly smaller. There's only so much space inside a skull, after all.References to the cabbie study don't often mention this evidence that cognitive development may be a zero-sum game. The more of your brain you allocate to browsing, skimming, surfing and the incessant, low-grade decision-making characteristic of using the Web, the more puny and flaccid become the sectors devoted to "deep" thought. Furthermore, as Carr recently explained in a talk at the Los Angeles Times Festival of Books, distractibility is part of our genetic inheritance, a survival trait in the wild: "It's hard for us to pay attention," he said. "It goes against the native orientation of our minds."Concentrated, linear thought doesn't come naturally to us, and the Web, with its countless spinning, dancing, blinking, multicolored and goodie-filled margins, tempts us away from it. (E-mail, that constant influx of the social acknowledgment craved by our monkey brains, may pose an even more potent diversion.) "It's possible to think deeply while surfing the Net," Carr writes, "but that's not the type of thinking the technology encourages or rewards." Instead, it tends to transform us into "lab rats constantly pressing levers to get tiny pellets of social or intellectual nourishment."
---more on how our digital tools enslave us
---Bordwell on "Watching a movie, page by page"
---interview with Bret Easton Ellis:
"My current conception of LA started in some ways with your novel Less Than Zero and then also from seeing old movies like Sunset Boulevard. I think that maybe part of what makes LA so weird is that there’s a palpable sense of desperation in the air. A lot of young people who want to make it.
Oh, totally.

That showed up a lot in your new novel, Imperial Bedrooms.
Big time.

There’s the character of Rain, obviously, who is willing to do anything to get a role in a film, but also there’s a part where Clay watches a video of the young actor who lived in his apartment before him, and he sees “the fake smile, the pleading eyes, the mirage of it all.” Do you encounter that kind of person in real life?
All the time.

And do they ask you for things?
Yeah. It’s Vegas here. It’s a gambler’s town. You come here and the odds are overwhelmingly against you, but you do it anyway. And you know what? I really think that—and I’ve said this before—but I think that LA forces you to become the person you really are. I don’t think LA is a place where you’re allowed to reinvent yourself. It absolutely isn’t. There’s an isolating quality to a life lived out here. I don’t care how many friends you have. I don’t care if you have a relationship. Whatever. It’s just an isolating city. You’re alone a lot. And I think it forces you to become the person you really are. It doesn’t allow you to hide. I think New York is a much easier place to kind of reinvent yourself. In LA, over time, the real person you are ultimately comes out, or else people can’t deal with that and they flee before it happens."
---Dan Clowe's new book Wilson
---The Adjustment Bureau, otherwise known as The Fedora, the Box, and the Mad Man.
---Sergio Leone sells cars as David Lynch peddles coffee
---the new age of data
---"Freaking awesome shot!"--Hokahey explains how to teach film to eighth graders
---the growth of social media
---the 5 best film books
---Zombie and Kick-Ass Beatlemania
---Russell Crowe! Heel! Good boy.
---lastly, the death of embarrassment:
"It is not only public grooming that you'll see more of these days; public displays of affection have become more frequent (and more amorous) as well. As one young Manhattan resident recently complained in the New York Times, "Everywhere I go, people are fondling each other as if the entire city were a cheap motel room." At work, over-sharing is becoming as vexing an office problem as gossip. Wall Street Journal reporter Elizabeth Bernstein wrote recently of the challenge of erasing from her mind the image of a colleague who, in pursuit of his bicycling hobby, described "shaving his entire body to reduce aerodynamic drag." We have even devised an acronym - TMI, or "Too Much Information" - to capture the uncomfortable experience of listening to people natter on about their personal problems.

What ever happened to embarrassment? Why are an increasing number of us comfortable bringing our private activities - from personal hygiene to intimate conversation - into public view? Bernstein and others place some of the blame on the desensitization wrought by reality television and social networking sites like Facebook, both of which traffic in personal revelation. To be sure, television and Internet video sites such as YouTube have made all of us more comfortable in the role of everyday voyeurs. We watch others cook, work, shop, argue, sing, dance, stumble, and fall - all from a safe remove. The motley denizens of reality television regularly put themselves into questionable and embarrassing situations so that they can later discuss, for our viewing enjoyment, how questionable and embarrassing their conduct was. If we are less easily embarrassed, it must be in part from vicariously experiencing so much manufactured embarrassment on the screen."

Uncle Gustav said…
I think before we analyze the death of embarrassment, it would be wise to explore the death of shame. The subject's too vast for this small box. And besides, I don't carry around convenient facts and figures to address such things, like some people. That in itself is another subject: the evolution of the individual into a factoid machine resembling a Fox News drone.
May 14, 2010 at 5:22 PM

The Film Doctor said…
Thanks for your cheerful thoughts, Flickhead. At least we have Salt to look forward to! I saw the new preview for that yesterday, and I still can't wait.
May 15, 2010 at 10:35 AM