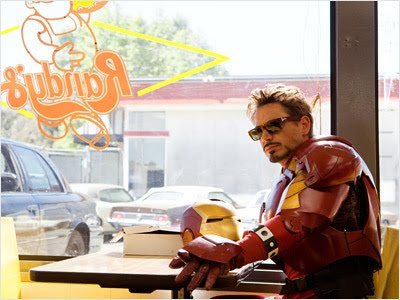 After watching Iron Man 2, I left the theater wondering if I can spend another summer watching such schlock. Daniel Day-Lewis chose to cobble shoes in Florence, Italy for a period of time in the later 90s. Perhaps I could arrange to do the same? Anyway, some notes:
1) A poignant moment: two robots look soulfully at each other before one flies away.
2) In this highly self-protectively ironic movie, you do see occasional signs of emotion: looking like the Cowardly Lion, the otherwise contemptuous Mickey Rourke wails when his character's dad dies in Russia. Also, Gwyneth Paltrow conveys impossible-to-contain joy when she learns that Tony has made her the CEO of Stark Industries. Otherwise, you mostly get Tony's ironic smarminess and much rock 'em sock 'em robot action.
3) As if still besotted and surprised by the success of Iron Man, the sequel revels in its fame and hype. Characters frequently stand before cameras and adoring fans. They bathe in the strobe lighting of the paparazzi flash bulbs, creating media images within images, magazine covers, TV appearances, screens within screens, an overlapping proliferation. The film seeks validation through media reproduction, the more copies the better.
4) The chief problem with Iron Man 2 is its smugness, the assumption of profit, the assumption of being technologically more "advanced," the superhero's no-longer-secret identity as rock star.
5) Iron Man 2 keeps returning to an Expo of one kind or another. Is this Favreau sucking up to Comic-Con fans? What is the difference between these glitzy Las Vegas-style Expo scenes and the gala photo-op premiers of the actual movie?
6) In terms of story, Iron Man 2's plot sags, drifts, drunkenly plunges down blind alleys, absentmindedly provides pretexts for action scenes, lurches toward a showdown at yet another Expo. Robert Downey Jr. lampoons his own tendency to indulge in drugged excess. He is the ne'er-do-well superhero, the midlife crisis putz corrosively saving the world amidst his squalor and his breakdowns. He brags, fails, brags again. His only sympathetic quality is his uselessness.
7) The film has a curious gear-head Popular Mechanics high school shop-class affect. You can build a better protagonist. Both hero and villain work hard with their acetylene torches and laser toolkits, erecting particle accelerators and metallic projections of masculinity that clank, clang for the increasingly deaf audience.
8) There's always Scarlett Johansson going all Emma Peel in her leather cat suit. Director Jon Favreau generously gives his character his own fight scene. Don Cheadle's sullen version of Lt. Rhodes leaves you wondering about what Terrence Howard thinks of losing the role after starring in the first Iron Man (the film's one bit of human interest). Samuel L. Jackson appears with an eye-patch to give the proceedings some Pulp Fiction gravitas. Sam Rockwell's histrionic turns as Justin Hammer helps one appreciate his work in Moon.
9) Regardless, you can rest assured of witty banter between Hammer drone attacks. In the midst of battle, Tony says "Drop your socks, and grab your Crocs. It's about to get wet." At least, the movie is self-aware about its stupidity.
Labels: Iron Man 2

Jason Bellamy said…
Thanks for seeing this, so I don't have to. Though I might anyway. You know how it goes.

If you haven't seen it already, Matt Zoller Seitz had a terrific piece for Salon this week on the emptiness of super hero movies. Considering that I found Iron Man to be pretty bland the first time around, these "more is less" reviews don't give me much reason to think my opinion will swing. Say this for The Dark Knight, it was worth talking about. I get the sense this one isn't.
May 8, 2010 at 4:41 PM

Richard Bellamy said…
Totally agree with you here. It's admirable that you take the time to be so eloquently critical (I like your comments about Popular Mechanics and about Rockwell's acting) of this tired, limp, unimaginative, boring, over-talkie flop. I loved watching Johansson and Paltrow and I got a chuckle out of some of Downey's quips, but that was about it. This movie had nothing else.
May 8, 2010 at 10:45 PM

The Film Doctor said…
Thanks, Jason and Hokahey,

Beyond the profit motive and the need to extend a franchise, I don't see much reason for Iron Man 2. With its Clash and AC/DC songs, its interest in 1950s hot rods and car-racing in Monaco, the film has a midlife crisis sense of rebellion, so it seems weird to see it marketed to teenagers (and one thing is for sure--the film has been well-marketed. Entertainment Weekly swooned over the movie for multiple covers ("Red Hot!") before giving it a C+ this past week). Can one admire a film for its marketing alone? I've noticed that several critics, including Anthony Lane, have remarked on how everyone "seems to be enjoying themselves" on screen, but since when does the actors' pleasure matter? Are we supposed to applaud the feel-good atmosphere on the set, even if we suffer in the Cineplex? Something about the sloppy smugness of Iron Man 2 makes me dread all the more upcoming behemoths such as Prince of Persia and Jonah Hex.
May 9, 2010 at 8:28 AM

Jason Bellamy said…
"...but since when does the actors' pleasure matter?"

The Film Doctor said…
Speaking of effective marketing, I found this more considerate of the fans than anything in the movie:

Radu Prisacaru said…
I feel I should say, I absolutely love your website. Could tell me how I can subscribe with it. I invite you to see my post, I hope you will find interesting too.
May 13, 2010 at 4:54 AM

Jake said…
Oh thank God other people hated this. I can't wait to not be a twentysomething so I don't get ostracized every damn summer.

I actually laughed at the expo bit. They introduce the scene with all this pomp, with Stark flying through fireworks to land with an explosion and women dancing, only to then start making a keynote speech. It's like someone setting off Roman Candles before making a fucking time share pitch. That's when I knew I was about to lose 2 hours.
May 15, 2010 at 8:37 PM

The Film Doctor said…
Thanks, Jake.

I've never entirely known exactly why I loathe the Iron Man franchise. I annoyed some readers when listing the first Iron Man as one of my top ten most hated films of 2008. It's not like I have anything particularly against Robert Downey Jr., either. Perhaps one can point to the scene in which Tony Stark sits in a hot rod (the film's version of hip wheels), or the gizmo on Pepper Potts' office desk that proves so distracting (just to liven up the scene?), or the way Johansson mostly just models different outfits instead of having a role. Now I'm mostly haunted by the image of Sam Rockwell smugly dancing across the stage to some song by the Average White Band (I think) as if he's on The Today Show. Jon Favreau seems to design this franchise for fuddy-duddy conventioneers getting wild in Las Vegas.
May 16, 2010 at 10:34 AM

Adam said…
First time commenter! Woo!
I may be in the minority among your readers when I say that I enjoyed the first Iron Man quite a bit - it took a scathingly egotistical protagonist and pulled him down very quickly and very hard in the beginning of the movie, so that some rapport was built for when he predictably returned to egotism. The sequal has no such pathos - he starts out as an irredeemable, wisecracky jerk and never changes even a little bit throughout the whole film.
Your observations over this sequal languishing in the surprisingly vast success of the first was well spotted. This movie felt 7 hours long and very self-congratulatory.
As a point of order, I believe the second expo that you reference is actually just still the Stark expo - it went on for 30 days, ridiculously. In what world do government weapons manufacturers have public, month-long expos?
May 17, 2010 at 4:15 PM

The Film Doctor said…
Thanks, Adam, for your thoughts. I believe I am in the minority for disliking the first Iron Man so much. You are right about the Stark Expo bizarrely running through the entire film. I figured there was a second, more military one for Hammer.
May 18, 2010 at 2:44 AM