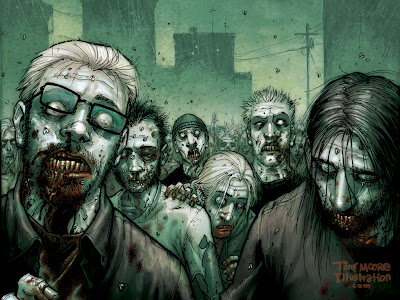 ---visions of the apocalypse in movies and literature
---The Walking Dead trailer
---the coming famine:
"says Julian Cribb, a veteran science journalist from Australia, `The era of cheap, abundant food is over.'Like many other experts, he argues that we have passed the peak of oil production, and it’s all downhill from now on. He then presents evidence that we have passed the peaks for water, fertilizer and land, and that we will all soon be made painfully aware that we have passed it for food, as wealthy nations experience shortages and rising prices, and poorer ones starve.Much of “The Coming Famine” builds an argument that we’ve jumped off a cliff and that global chaos — a tidal wave of people fleeing their own countries for wherever they can find food — is all but guaranteed."
---the Inside Job trailer
---10 years of unemployment and permanent war
---targeting Target
---the top 50 music videos of the 1990s
---Jared Hess and the title sequence of Napoleon Dynamite
---Anne Thompson's and Jack Mathew's thoughts on the changing landscape of movie coverage:
"AT: The negative of the current online movie beast is that the quality of the discourse has coarsened. While Jonathan Franzen can afford to cut off his computer and sit in a quiet room, the rest of us are reading, ingesting and posting faster, shorter and with more frequency, for less money, cutting corners, trying to beat the competition, and fashioning headlines with celeb names, “controversy” or “exclusive” to build traffic. There is little awareness, I find, of many of the rules of conflict of interest and journalism ethics that were pounded into journalists as they moved up the ranks.I’d like to think that discerning readers will seek out sites with authority and cred and writers and critics more likely to steer them right. The danger is that seeking access to junkets leads to easy promo filler (and ad quotes) over meaningful independent scrutiny. On the other hand, critic site Pajiba, which prides itself on snarky reviews, seems to be thriving. In this fragmented universe, it’s not about the many seeking truth from the one. Now, each person seeks multiple sources who they trust. You get what you want, if not what you need.JM: I wonder what Pauline Kael would have thought of all this. The late New Yorker magazine critic was the Gertrude Stein of movie culture, the go-to guru for up-and-coming critics who craved her approbation and—for those whose work she liked—her friendship and freely given advice. Her eyes would glaze over if she were around to sample the work of unknown critics now rising like so many dandelions on the Internet landscape. I’m not saying there isn’t talent out there—as Roger Ebert has had time to verify, there is—but she’d balk at the amount of chaff she’d have to brush aside to get to the wheat.AT: Safe to say, in sum: Nobody writes like Kael, or commands the attention that she once did, or has the impact on the culture that she once had. The two critics at the New York Times and The New Yorker respectively hold some sway, but finally the most powerful critic in America is a populist who established his fame on television’s ‘At the Movies’—Roger Ebert. Because he lost his balcony perch when he lost his voice to cancer, he now communicates with more film fans than ever before, not only via the Chicago Sun-Times but online, on his blog and on Twitter, where he has 220,000 followers and counting. It’s the new order."
---Robert De Niro explains method acting to Elmo
---@CriterionRefs considers Bob le flambeur
---Dancing at the Movies (thanks to @hindmezaina)
---essays about Google from William Gibson and others:
"Cyberspace, not so long ago, was a specific elsewhere, one we visited periodically, peering into it from the familiar physical world. Now cyberspace has everted. Turned itself inside out. Colonized the physical. Making Google a central and evolving structural unit not only of the architecture of cyberspace, but of the world. This is the sort of thing that empires and nation-states did, before. But empires and nation-states weren’t organs of global human perception. They had their many eyes, certainly, but they didn’t constitute a single multiplex eye for the entire human species.Jeremy Bentham’s Panopticon prison design is a perennial metaphor in discussions of digital surveillance and data mining, but it doesn’t really suit an entity like Google. Bentham’s all-seeing eye looks down from a central viewpoint, the gaze of a Victorian warder. In Google, we are at once the surveilled and the individual retinal cells of the surveillant, however many millions of us, constantly if unconsciously participatory. We are part of a post-geographical, post-national super-state, one that handily says no to China. Or yes, depending on profit considerations and strategy. But we do not participate in Google on that level. We’re citizens, but without rights." 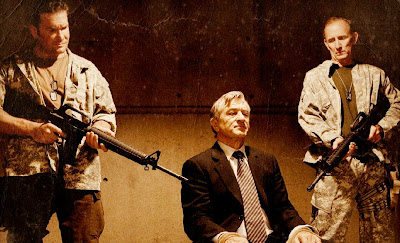 ---Alfred Hitchcock's lecture
---Machete's Danny Trejo interview
---Scott Rosenberg's "In Defense of Links" part one and two and three
---Gene Deitch animation
---lastly, waiting for Godard, by Matt Zoller Seitz:
"If more filmmakers were as "eccentric" and "difficult" as Godard and Malick, there would be a lot more art in movies and a lot less naked shilling. Or at the very least, movies would be less predictable, less deserving of being called "product."And what about you, reader? Right now you're probably reading this with two or three other windows open on your computer screen and your cellphone on. When a new e-mail or phone call or text message comes in, maybe you hear a little noise, a "ding," like the bell that made Pavlov's dog's ears perk up. And you look to see who's trying to reach you and what it's about. Maybe you answer immediately, maybe you wait, but you always pay attention because you feel like you're missing out on something, and on some level you're terrified that the world's going to stop turning if you're not on top of it all. Godard could not care less. The world keeps turning. I bet he's sitting in a park right now, reading Le Monde and smoking his fourth cigar of the day."
Labels: Notable film and media links

David Blakeslee said…
Thank you for linking to my post! I'm adding you to my links box to return the favor. - Dave/CriterionRefs
September 1, 2010 at 10:46 PM

Simon said…
The famine thing is rather terrifying, and now I feel bad for liking cheeseburgers.

Jason Bellamy said…
MZS is so effortlessly and engagingly and almost unfailingly on-point. I think I might hate him.
September 2, 2010 at 6:01 AM

Anonymous said…
Nice links. But, I read it Godard-style... On the pot where a man can be alone with his thoughts, his iPad, and your very nice blog.
September 2, 2010 at 7:25 AM

Hind Mezaina said…
Thanks for including a link to my site. I've said it before and will say it again, the Godard piece is brilliant. It's great there are still people like him around and wish there could be more.
September 2, 2010 at 5:28 PM

The Film Doctor said…
My pleasure, Dave. Bob le flambeur is one of my favorites.

I agree that MSZ is extremely good, except, perhaps, in the case of Salt, right?