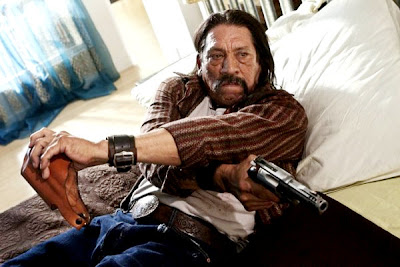 Why is Machete the sweetest film thus far this year?
1) Because it speaks for the working man, Latino or otherwise. Machete is an exploitation film that agitates against the exploitation of the working class.
2) Because, in comparison to so many Orlando Bloom-ish photoshopped pretty boy leading men, Danny Trejo makes for a delightfully unlikely craggy, grungy, laid back, his-shirt-tale-hanging-out hero. He's such a gentleman, he doesn't even take advantage of Jessica Alba's character when she drunkenly asks him to join her in bed.
3) Because writer/director Robert Rodriguez keeps paying affectionate tribute to Quentin Tarantino and his tendency to loot 1970s schlock cinema. In reference to Pulp Fiction, Rodriguez includes an important briefcase and a climactic fight with a Samurai sword. Also, the comically exaggerated killing of Machete's family (to set up his revenge) reminded me of Kill Bill.
4) Because Rodriguez teases the viewer with a desire to see Don Johnson's eyes, which remain masked by shades until near the end of the film. I kept being weirdly reminded of Johnson's first movie, A Boy and His Dog (1975). 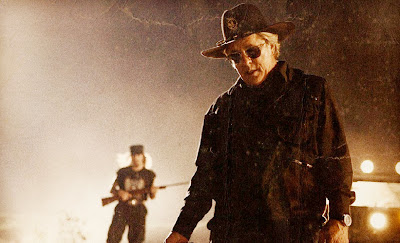 5) Because it attempts to resurrect the acting career of Lindsay Lohan. In her first scene, her character's father (played by Jeff Fahey) blasts his way into a meth lab, killing numerous thugs to help save his daughter from her drug-induced stupor. Later, when she wears a nun's habit, she wields a machine gun with aplomb. Like a Dirty Harry Mother Teresa, Lohan is both redeemed and empowered.
6) Because, in comparison to the scraped-with-a-Brillo-pad mindless bloodletting of Piranha 3-D, Machete concerns a real issue--illegal immigration--that grounds all of the exploitative raunch and gore in something like real emotion. As one bodyguard says, "We let the Mexican park our cars. Why don't we let him into our country?"
7) Because Robert De Niro gets to play a variation on the Charles Palantine politician character in Taxi Driver. In his role as anti-immigration advocate Senator McLaughlin, De Niro reminded me of the main character in Bob Roberts, as well as former Vice President Dick Cheney's little mishap with a shotgun while hunting. In our gun-obsessed country, trigger-happy Senator McLaughlin scarcely seems like an exaggeration.
8) Because the film is full of discussions and insert shots of things like intestines, corkscrews, and skull scrapers that you know will be delightfully employed in the next fight scene. 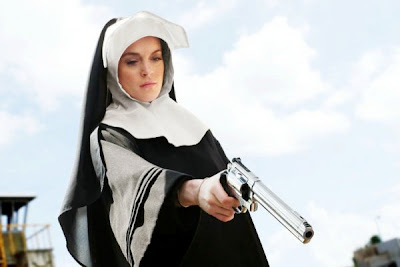 9) Because when Jessica Alba's character ICE agent Sartana fixes Machete a Mexican dinner to the sound of cheesy Latino music, I felt like I was visiting my favorite Mexican restaurant.
10) Because Cheech Marin plays a hilarious Catholic priest with lines like "I absolve you for all of your sins. Now get the fuck out." I also liked his crucifix made up of surveillance monitors (a symbol for our times).
11) Lastly, because Machete leads the revolution against too much oppressive technology in our lives. As he says, "Machete don't text." When given the choice between a gun and a machete, he prefers to wield the working class sword every time.
Related links:
Erik Hayden's thoughts about Machete
the worst movie ever made?
Labels: Machete

Anonymous said…
Thanks for the thorough and intelligent plug. It's obvious you watched this with your heart and your brain, which I think is the best way to see Rodriguez's films.
September 5, 2010 at 10:17 PM

The Film Doctor said…
Thanks, Simon,

I look forward to your post(if you write one) about the movie.

I didn't mean to write a plug. Machete does have its flaws. Its narrative tension sags at times in the latter half. There's the requisite and unpleasant torture scene included to convey the loathsomeness of the bad guys. Trejo underplays some of his lines to the point of looking disinterested. Still, I was consistently surprised by the affectionate, generous direction of Rodriguez. He also boosts Jessica Alba's career. What good movies has she been in recently?

Richard Bellamy said…
Well, what a film! It's interesting that Rodriguez would extent Tarantino's Grindhouse concept by making a complete film of one of the previews used in Grindhouse - or maybe Rodriguez had always intended to make it.

What a film! I'm not as enthused about it as you are though. I like its brash bravado but the bloodletting got tedious. And I like some of the elements you enjoyed - especially Lohan donning the nun's habit. That's so Tarantino. (But, still, Lohan's very sleazy role was kind of sad in the light of her decaying career.) I also loved Michelle Rodriguez's performance; she's always hot!

I guess what I liked most about the movie is its function as Hispanic revenge for a history of prejudice, (and I certainly didn't mind the white Texans being the bad guys): The rich Texan refers to the Alamo and his fear of Texas becoming Mexico again, but his family dines on tacos. The senator gets shot as a wetback. The whole Mexican gardener joke and Machete's use of gardening tools as weapons. It must have been a joyride for Rodriguez.

Some scenes perked me up - like the showdown at the church with Cheech as the ex-cop turned padre. But the final battle and sword duel were tedious.

I guess it doesn't matter how Machete survived the fire - though I kind of wanted to know. I guess each scene made it clear that he could get out of any predicament.

I do find myself thinking that perhaps I shouldn't have liked the film as much as I did, that it is offensive, rude, crass, very vulgar, and so on, but there's something about Rodriguez's punk attitude and his affection for the characters that won me over. The shot of the white and the Latino dishwashers standing together emphasizes how any worker can be used, regardless of race. Basically, the movie roots for them. Yes, Lohan has often participated in the tabloid media fascination with her to the point of wrecking her career, but Rodriguez clearly wants to turn that around even as the film comments on and lightly lampoons her mistakes. Funny how an exploitation movie that ultimately supports the exploited ends up being surprisingly entertaining.
September 10, 2010 at 5:34 AM

Jason Bellamy said…
Good thoughts. My favorite moment in the film is when the working man raid enters the compound and one of the last troops to arrive is some guy pushing an ice cream cart. That killed me.

Indeed, this is a movie for the working man, whatever his skin color. And I liked the idea of Mexicans standing up to whitey and taking them on in a fight that seems strangely noble in its action-movie epicness.

In short, I really enjoyed the movie when Machete was on screen. But the villains were very disappointing. Seagal was only entertaining in arrival and departure, and otherwise, well, there's a reason he isn't in movies anymore. De Niro seemed to mail this one in, or maybe there was just no character there. And Jeff Fahey as Booth seems to know what a great, snarling villain is like, but instead he was just an annoying snarling villain. Haven't heard this much empty growling since Batman's dialogue in The Dark Knight.

Half of the film is indeed "sweet." But usually the villains in these movies are the ones you adore. And this time that wasn't the case.
September 12, 2010 at 3:41 PM

Anonymous said…
MACHETE DON'T TEXT! Right on I hear you brother. If there is one piece of technology that epitomises how fucked up things are its texting. Why bother talk when you can text? Why bother use genuine communication when you can just text? Also what a wonderful way to dump your boyfriend, let down a best friend, or just fob someone off. Yes the text is a wonderful thing, it enables the impersonal, thoughtless, and uncaring part of everyone's personality to shine through.
November 11, 2010 at 12:00 PM