Once again to the brig: Pirates of the Caribbean: At World's End (2007) 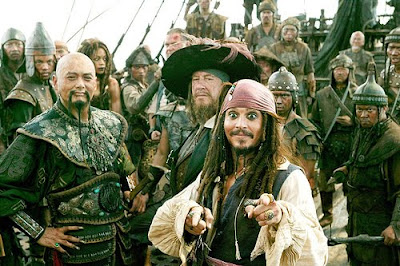 [Note: Here's a time capsule review of the last film of the "trilogy" from my newspaper days. In the May 13, Entertainment Weekly, Depp said of the previous movies, "They had to invent a trilogy out of nowhere. It was plot-driven and complicated. I remember talking to [Gore Verbinski, director] at certain points during production of 2 and 3 and saying `I don't really know what this means.' He said, `Neither do I, but let's just shoot it.'" Now that Michael Bay has apologized for the crappiness of the last Transformers movie, I wonder when Depp will admit that On Stranger Tides makes no sense?]
For much of the 20th century, pirate movies bombed. Then, in 2003, Disney executives thought they would adapt an amusement park ride into a film produced by Jerry Bruckheimer. Johnny Depp got the lead as Captain Jack Sparrow, and he approached the role in an oddly fey impish way (with mascara and dreadlocks) that had the Disney suits throwing conniption fits, since they wanted a more conventional macho figure. To everyone's surprise, the film turned out to be pretty good, and Disney made plenty of money. 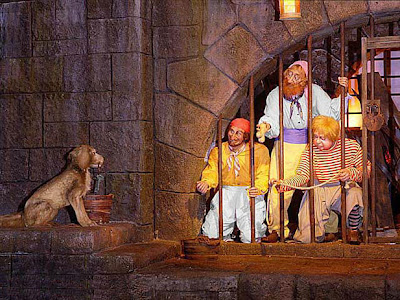 Now in 2007, the third installment weighs in as the blockbuster most likely to earn hundreds of billions of dollars for the rest of the summer, and there's a sense of futility of even commenting on the thing, given how many will go and see it regardless of what critics will say. In 2006, the studio began shooting At World's End without a finished script. Since I lost interest in the second installment (Dead Man's Chest) after the first half hour, I had dim hopes for this one, but it did prove diverting for an hour before plot incoherence set in. Captain Jack died in the last film, so now he's off in an underworld titled "Davy Jones' Locker" and it's up to poor Will Turner (Orlando Bloom), Elizabeth Swann (Keira Knightley), and even his former enemy Barbossa (Geoffrey Rush) to go to the end of the earth to fetch him back to the land of the living. Just to keep things complicated, the East India Co's Lord Cutler Beckett (Tom Hollander) seeks to end the age of piracy by taking over the ghost ship, the Flying Dutchman with Captain Davy Jones (Bill Nighy) and his squid-like tentacled face.
So Elizabeth and Barbossa go visit Captain Sao Fang (Chow Yun-Fat) in Singapore to get some navigational charts to the underworld. To get into Sao Fang's gangster stronghold, Elizabeth has to strip, marking the first and last time that Knightley does anything suggestive. 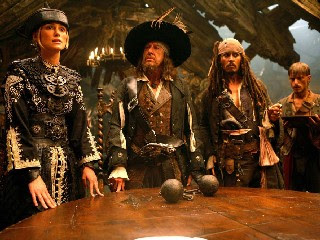 The usually good actor Chow Yun-Fat has a scar and an odd lisp, and he keeps saying "More steam!" during the scene, but then the monkey sets off a bunch of fireworks in the compound as the British soldiers rush in. Everyone has a good sword fight, and then our heroes are off to get Sparrow, which involves plunging their ship over the edge of the world.
When Sparrow finally appears, he's on a landlocked ship with an entire crew of digitally inserted computer-generated versions of himself, which hints at the filmmakers' desperate attempt to provide more Johnny Depp. Betraying a blockbuster mentality, they confuse more with better. At another time, Jack talks to miniature CGI versions of himself dropping down through his dreadlocks, but then some mystical rock crabs transport the ship across the land, and Jack meets up with his buddies. He says "Why should I sail with any of you? Four of you have tried to kill me in the past. One of you succeeded." But they persuade him anyway, and then they try to reform the Brethren Court of pirate organizations to take on evil Captain Beckett in one last massive battle of the high seas. 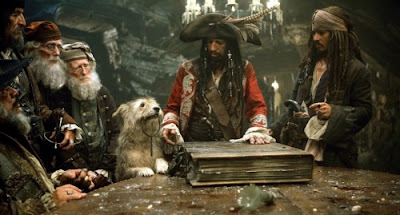 As all of the pirate organizations squabble and betray each other, Keith Richards shows up for a sweet cameo as Jack's pirate father. While Depp drew on his friendship with Richards to help create some of his pirate mannerisms, there's no particular reason to assume that Richards can actually act. So, his much ballyhooed arrival is a letdown, though he does strum a guitar a little.
Otherwise, like its predecessor, At World's End has the jarring habit of jumping into the next scene/island/ship without explanation. Perhaps Disney made this film this way so that youngsters can rewatch the film and gradually piece together what's happening. It's awkward not knowing why a barnacled man disentangles himself from a wall in the brig, just to bewail his lost son. Moreover, I could never tell why Orlando Bloom is in the film at all, except perhaps to provide a handsome face to match Keira Knighley's. 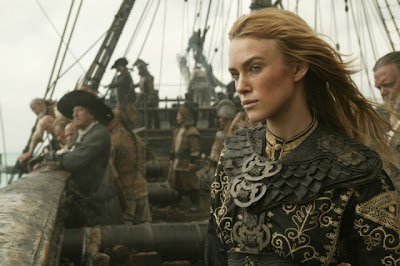 After many murky plot shifts, At World's End climaxes with a battle scene where two ships shoot cannon fire at each other as they both get sucked in a gigantic whirlpool in the rain. The hapless Will finally proposes to Elizabeth as they swordfight with many computer-generated creatures. As Jack Sparrow twirls around the main mast, hanging on a rope, I found myself wishing that he would get killed by a stray bullet and stay dead.
Labels: Pirates of the Caribbean At World's End

Richard Bellamy said…
My daughter enjoyed Jack Sparrow's very silly antics and the lighthearted humor. I enjoyed the mermaids. The sword fighting goes on and on and on.
May 21, 2011 at 10:45 AM

The Film Doctor said…
Depp keeps his face constantly moving, as if to make up for the lack of any point to many of the scenes. This film was, for me, the return to the real horror show of the summer movie season. The mermaid scene pauses for a moment to build suspense, but why the vampire fangs? Why does Syrena have legs for awhile in the jungle?

As far as I could tell, the movie lifted Blackbeard's reluctance to leave his cabin from the story of Ahab in Moby Dick. Also, the conclusion of the movie included references to Hamlet and two Indiana Jones films.
May 22, 2011 at 4:17 AM

sophomorecritic said…
I think the new one has gotten some surprisingly decent reviews and I don't think Depp will ever admit this was a failure.

I too agree with you about the trilogy that the latter installments make the first one look good:
I wrote my review here:
http://bit.ly/j2lDUk
May 31, 2011 at 8:17 PM