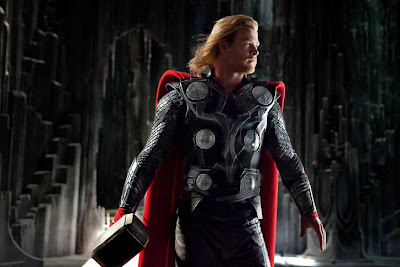 In the CGI realm of Asgard,
One blond Norse is built like an offensive guard.
He stands in a golden light so garish,
He resembles some guy in a Maxfield Parrish.

Proud Thor stands by the door.
He wants more,
The throne of Marvel comics' Norse lore.
His cape is made of red velour. 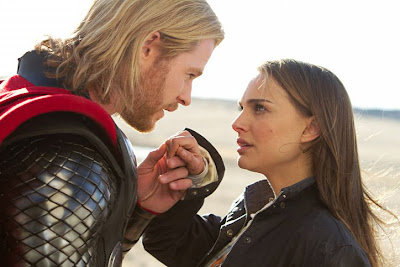 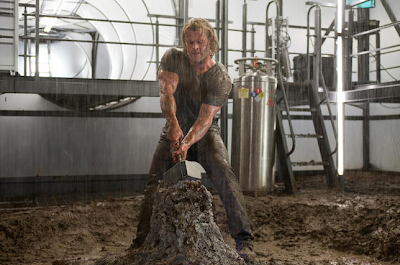 As astrophysicist Jane, Portman goes gaga
Whenever Thor struts through the door.
He's a hunk of an otherworldly saga,
Who smashes his mug upon the floor.

r has to learn humility and tact
To get his cute little hammer back.
Thor needs to find some grace
To fight a monster that shoots lasers from its face.

I wanted to like Thor due to Kenneth Branagh,
But I grew weary of the ersatz costume drama.
The film works better in the US,
Where Portman does not appear so Black Swan-stressed.
Labels: Thor

Richard Bellamy said…
Thor was a bore and a snore and more. But it was worth seeing so that I could enjoy all the nuances of your image gallery and epic poem.

The armor looked like it was made of plastic. Asgard looked like an abstract sculpture made of tacky Christmas ornaments - and even in its CGI vastness, it never looks like a city. I kind of enjoyed the rednecks trying to lift the hammer. Oh, and the hammer, what a dumb looking hammer!

I liked the humor of the American scenes, especially when the regal gestures of the Norse characters contrast with the those of the befuddled Americans.

I probably would have liked the movie more if it had a different set design in Asgard. Branagh's versions of Hamlet, Henry V, and Much Ado About Nothing all hold up well.
May 11, 2011 at 11:27 AM

The Film Doctor said…
Thanks Alice,