Why is Fast Five so popular? 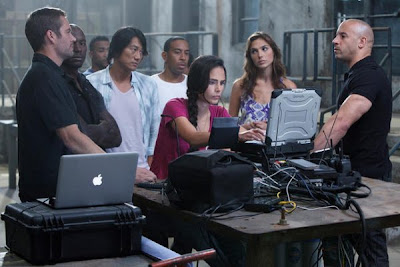 "Five's' Huge $83.6M Opening Kick-Starts the Box Office"--The Wrap
The question is why? My attempt at some answers:
1) What are the names of the five movies? The Fast and the Furious (2001), 2 Fast 2 Furious (2003), The Fast and the Furious: Tokyo Drift (2006), Fast & Furious (2009), and now Fast Five.
2) Which Hitchcock film has uncanny parallels with Fast Five? Notorious (1946). Both films start in the States and move quickly to Rio de Janeiro for the remainder of the storyline. While there's no real equivalent to Ingrid Bergman's Alicia Huberman as she juggles Nazis, Cary Grant, and the CIA, Dom and Brian do have to walk a fine line between an underworld kingpin named Reyes and an American super-cop named Luke Hobbs (Dwayne "The Rock" Johnson). At any rate, both movies feature nice talismanic shots of the Christ the Redeemer sculpture that spreads its arms over the city. Given that Dom loses a gaudy cross on a necklace and then breaks into a policewoman's flat to steal it back (thereby setting up a romance between them), one figures that director Justin Lin enjoys throwing in some Catholic imagery whenever possible.

3) What other major classic film keeps coming to mind? Butch Cassidy and the Sundance Kid (1969), in part because Dom's and Brian's long, long fall into water resembles the famous jump that Paul Newman and Robert Redford take into a ravine (however, Dom and Brian fall with a 1965 Chevrolet Corvette Grand Sport). In Butch, the American gangsters repeatedly rob a train by stopping it the old-fashioned way. In Fast Five, Dom and his gang ride up to the side of speeding train in a large jeep-like vehicle and use acetylene torches to burn off one metal wall of a train car before stealing some cars, an unlikely occurrence that brings up question number 4. 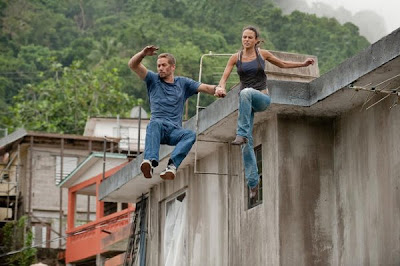 4) Isn't Fast Five incredibly implausible? Yes, and that (along with Vin Diesel's issues with acting) is a large part of its appeal. As soon as Brian successfully uses a race car to knock over a large prison bus to free Dom (which would normally flatten anyone), one realizes that very few of the action stunts in this movie make any kind of logical sense at all, nor do any of the filmmakers care. On one level both Diesel (who co-produced) and Paul Walker are in their way very serious about keeping their franchise afloat, since neither has much of any career going otherwise. So, any action scene gets amped up to 11. For instance, late in the movie, muscle-bound Dom fights it out with super-cop Luke in an epic battle that involves much crashing through walls, loud banging noises, and the colliding of flexing, bulging biceps. Each scene is so deliriously overwrought, it becomes delightful.

5) What of Vin Diesel's acting? In the best Sylvester Stallone fashion, he stands there, chest bulging out of his wifebeater, and mumbles out lines like "You ain't gonna be like that," when Brian talks of his father "never being there." At another point, in the midst of stealing back his cross necklace, he says to the fetching policewoman (Elsa Pataky), "Why would you believe anything I would tell you?" He has such difficulty getting out the line, you'd believe anything he says. At another time, Dom philosophically mentions that "Running ain't freedom," and again, one wants to agree. True, the movie's dialogue is mostly a hash of ghastly cliches, but these guys are so endearingly cuddly as they run from the law, assemble witty gangs of progressive, multicultural robbers, and set up the next high-speed heist, even Luke Hobbs can't help but sympathize with them over time. 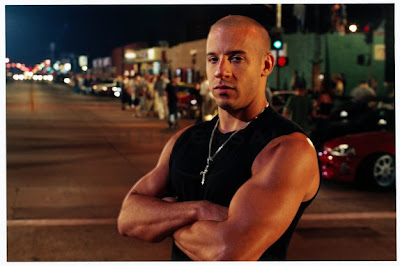 6) In the midst of rising gas prices, what place do Hot-Rod muscle-car worshipping movies have nowadays when many feel obliged to purchase a Prius or something? As the age of playful driving recedes in the midst of traffic jams, and people prefer cyberspace to actual streets, the Fast franchise gains strength the more fantastic and otherworldly it gets. Before peak oil hits, why not race to the finish?
7) So, why is Fast Five so popular? Even given how it should feel like a walking corpse as it rehashes the same testosterone-laced conventions one more time ("We're gonna need a faster car"), the movie has charm of an oddly unpretentious sort, and that's a relief in the midst of so many other more ponderous, loud metallic, CGI-filled franchises just waiting to be released this summer.
Labels: Fast Five

JeanRZEJ said…
I think it's made money because it's a popular franchise with a good marketing budget. People paying to see it are mostly sight-unseen, so analyzing the film itself seems unnecessary. I'd measure the masses' collective anticipation level and break down the content in the commercials and trailers, instead. Information is expensive, and unfamiliar films can be taxing on a passive audience, so familiar passive entertainment is the easiest road to opening weekend popularity. Soda is more popular than real fruit juices. To understand the phenomena the last place you want to look is the ingredients!
May 3, 2011 at 4:03 PM

I see what you mean, but often I despise sequels, and Fast Five was oddly pleasurable. I agree with you that perhaps an analysis of the movie's marketing may be more fruitful, but other franchises will tank soon enough. Isn't this summer likely to consist of doomed overly expensive safe bets: i.e. superhero/sequels? Why wasn't Fast Five doomed as well? Does it have something to do with its gearhead enthusiasms, its lack of star power, and its embracing of b-movie tropes? I don't know. I don't even normally like race cars.

In one respect the film has brilliant casting. I've always liked the Dwayne Johnson since he was willing to mess with his image in Southland Tales, and he makes all of the difference as the implausible goofball cop in Fast Five
May 3, 2011 at 4:40 PM

JeanRZEJ said…
Whether or not you found Fast Five pleasurable had nothing to do with you throwing down money to see it, though, so the $ amount to open the post doesn't seem related to quality. After all, the previous film seemed to be far less liked and made only a bit less money (I checked, because I had figured it flopped but was instead highly successful). The American made a ton of money - and I am guessing that the George Clooney fanbase weren't overjoyed.

As for the film itself... I can't ever guess how these things get made, whether with a good script or with a terrible script. Perhaps they do the action scenes first and everything else is secondary. It's a strange thing. I never watch American movies anymore, though, so I don't really care how many boring 'safe bets' get released! The last two films I saw in the theater were Dogtooth and The Temptation of St. Tony, both amazing. Their marketing didn't work quite as well, though, given that there was a total of 2 other people in the theater between the two showings.

I do love Mr. Johnson, though, always. He messed with his image plenty in Be Cool, too. He performed a multi-part scene from Bring It On - by himself. That's talent. I don't really know what his image was in wrestling, though. I just know he's a funny dude.
May 4, 2011 at 5:32 PM

I admire the stringency of your movie choices. I was thinking of doing the opposite this summer--watching every single blockbuster wannabe that appears, and then recording my reactions faithfully in a series of loopy posts. After enough of that, I imagine later reviews will consist of one nonsense word repeated ("Nog nog nog nog nog nog"), howling gibberish. I will need to figure out ways to twitch spasmodically verbally, or convey distant screams. It could be a good exercise in conveying derangement, torment, and squalor.
May 5, 2011 at 5:11 AM

Jason Bellamy said…
Film Doc: I haven't seen any of these films, but, as you suggest, what's terrible about them is also part of the appeal. Probably a large part. And they do a great job of playing to their target audience.

I strongly recommend you go to iTunes and download a recent (April 28) edition of "The BS Report" with ESPN writer Bill Simmons. For 45 minutes, he and Adam Carolla break down all of the film's pleasures; sincerely enjoying it and laughing their asses off at its expense. It's pretty solid analysis, actually.
May 5, 2011 at 8:58 PM