The increasing prevalence of meh: 3 notes on You Will Meet a Tall Dark Stranger and Drive Angry 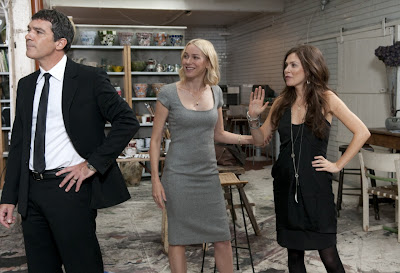 1) With its obtrusive casting, forced drama, and frustratingly half-baked plot strands, You Will Meet a Tall Dark Stranger proved an endurance test. It views like a sketch, and its placement in London seems of little consequence. Given that the movie is not trying to be funny, what was the guiding principal of its composition? The ironies of where relationships can go? How life can resemble the film's opening quote from Macbeth--"full of sound and fury, signifying nothing"? Roy (Josh Brolin) petulantly remonstrates with his wife Sally (Naomi Watts) since he's annoyed by his publisher's lack of response to his freshly-written novel in manuscript. I wondered if Woody Allen was similarly bothered by his inability to finish this movie? Why did Anthony Hopkins agree to play the demeaning role of a duped old man named Alfie Shebritch who decides to marry a call girl (Lucy Punch)? All of the high-level actors apparently had an inability to say no to a plum role in a Woody Allen film, so all I could think of was the high level of mystery that Brolin brought to his character Llewelyn Moss in No Country for Old Men or Hopkins' work in The Silence of the Lambs 20 years ago, or Watts as Ann Darrow in King Kong. Playing Sally's mother and Alfie's dumped wife Helena, Gemma Jones reprises her role as the similarly dumped wife in Bridget Jones's Diary. As the suave gallery owner who enjoys Sally's amorous attention, Antonio Banderas is instantly dull. He is designated to play a handsome wealthier guy, but there's nothing more to him. Tall Dark Stranger never allowed me to suspend any disbelief because the casting was so chock full of wondrous talent. Why exactly does Freida Pinto play a woman that Roy ogles from afar as she always wears red and plays the guitar? She's symbolic. She's a muse, yes, but her character never evolves much more than that.
2) I liked one plot development (spoiler alert). After bombing out with the publisher, Roy steals an unpublished novel from a friend named Strangler (Ewen Bremner) who he thought was dead in an auto accident, but turns out to be only in a coma. Now the novel will be published in Roy's name to much acclaim, and he lives in dread that his friend will awake to learn of his traitorous plagiarism. His particular nightmare has much more existential bite than anything else in this perfunctory production. 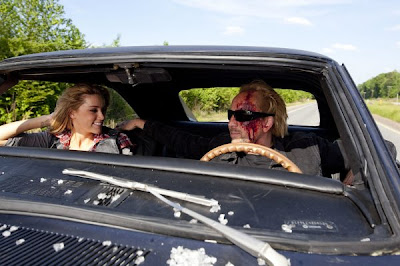 3) No matter how I turn and twist it in my thoughts, I still find it remarkable that Drive Angry had no effect on me whatsoever. Even with its hyper-violence, Nicolas Cage's sleepy glower and ironic new haircut, Amber Heard in Daisy Dukes, hipster muscle cars (a 1969 Dodge Charger!), a scene in which (spoiler alert) Cage's character (Milton) gets shot point-blank in the eye and yet lives (!), devil-worshippers banally dancing by firelight, the oddball casting of Bella's dad (Billy Burke) of the Twilight franchise as the head devil worshipper, a flaming car that evokes Ghost Rider, and a vengeful mission erupted from the gates of HELL, Drive Angry proved no more than fitfully diverting, as if a man were to stand on the roof of a building across the way and yell "I'm cool! I'm bad! I'm tough and subversive!" for several hours, waving his gun about and crashing into things. After enough of this, one shrugs and walks away. By trying so hard to be edgy in the Tarantino/Rodriguez mode, Drive ends up being cutely nondescript, an exercise in ironic attititudinal display, an innocuous piece of bad-assery reminiscent of a plaque dedicated to Harley-Davidson in the ceramic section of the Hobby Lobby. The movie vanishes from the mind in direct proportion to how badly it wants to be rebellious.
Labels: Drive Angry You Will Meet a Tall Dark Stranger