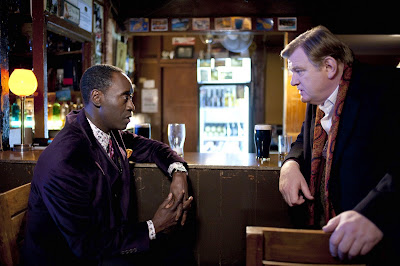 ---Jim Jarmusch discusses his method
---Valero's "A Faceless Corporate Enemy"
---David Lynch's Lady Blue Shanghai for Dior
---celebrating the Hermione Granger series:
"Look: I’ve enjoyed stories that relied on a “Chosen One” mythology to convince us that the hero is worth our time. I liked Buffy the Vampire Slayer as much as anyone. But it’s hard to deny that “Chosen Ones” are lazy writing. Why is this person the hero? Because everyone says he’s the hero. Why does everyone say he’s the hero? Because everyone says so, shut up, there’s magic.Hermione is not Chosen. That’s the best thing about her. Hermione is a hero because she decides to be a hero; she’s brave, she’s principled, she works hard, and she never apologizes for the fact that her goal is to be very, extremely good at this whole “wizard” deal. Just as Hermione’s origins are nothing special, we’re left with the impression that her much-vaunted intelligence might not be anything special, on its own. But Hermione is never comfortable with relying on her “gifts” to get by. There’s no prophecy assuring her importance; the only way for Hermione to have the life she wants is to work for it. So Hermione Granger, generation-defining role model, works her adorable British ass off for seven straight books in a row. Although she deals with the slings and arrows of any coming-of-age tale — being told that she’s “bossy,” stuck-up, boring, “annoying,” etc — she’s too strong to let that stop her. In Hermione Granger and the Prisoner of Azkaban, she actually masters the forces of space and time just so that she can have more hours in the day to learn."
---interviews with SJ Perelman, Terence Stamp, and Jean-Pierre Melville
---the Marshall McLuhan scene in Annie Hall 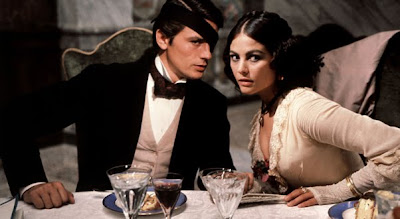 ---photos from American Graffiti, The Leopard, and Catherine Deneuve's career
---Stanley Kubrick: A Life in Pictures
---the secrets of Caddyshack
---movie posters from the Stenberg brothers
---Clive James reviews Thomson's New Biographical Dictionary of Film (and yes, Kael does deserve that much praise):
"His assessments of Hitchcock are sane and brave: while as mad about a capital work like North by Northwest as you or I, he is ready to say, as almost no other critic is, that Hitch’s frequently lousy-looking back projection is not an ironic comment on the illusion of reality or a realistic comment on the illusion of irony but is in fact lousy back projection. Of Truffaut, to say that his perennial youthfulness “made all his films like debuts” is to catch him to the life. About Robert Walker, Thomson concludes that the actor’s career, before he made Strangers on a Train, had been “cramped by wholesomeness”: well said. Other things are ill said, but usually because he is bursting with appreciation.Bursting, or having already burst. Some people thought he had strayed into weirdo territory when he wrote a book about Nicole Kidman that was distinguishable from a mash note only in being less temperate, but most of us realized that he had merely been carried away. It’s one of the nice things about him, unless you sincerely believe that to notice the beauty of a female film actor (let me just say actress and see whether somebody calls the cops) should be an indictable offense. Carrying you away is what the movies have always tried to do, and putting a well-favored young lady on the screen has always been one of the main means of transport. Other means of transport are the look of the thing, the appeal of the theme, the logic of the action, the tautness of the story, and the authority of the male face at the center of the frame. Thomson responds to all those things too. Male stars are not deprived of his appreciation merely because their good looks, however potent, are not of the kind that drive him to lyrically expressed desire. Directors, producers, cinematographers, even the occasional writer: Thomson loves them all, as long as they are good at what they do."
---compulsive frugality and tales from the new great depression
---appreciating Amy Winehouse

---hipster lit
---Roger McNamee explains why social is over
---His Girl Friday without the dialogue
---Romney analyzes Werckmeister Harmonies:
"The haunted, bony features of German actor Lars Rudolph, who plays lead protagonist Valuska, may suggest a Dostoievskian holy fool, but the tone of Krasznahorkai's novel radically stripped down in his and Tarr's screenplay, its verbal torrents reduced to a chill autism is closer, as W.G. Sebald has suggested, to Gogol. The universe of Werckmeister Harmonies is ruled by the Gogolian quality of poshlosht, best described as a transcendental crassness and incarnated here by the fearsome Tünde, played by Hanna Schygulla (dubbed, like Rudolph, into Hungarian). Initially it comes as a shock to see Fassbinder's perennial vamp as an elderly, well-padded babushka, though that may be Tünde's deceptive guise, for the next time we see her, dancing with her drunken lover, she seems to have regained a calculating sexual force.The film is dominated by a brooding atmosphere of apocalyptic unrest, though it is implied that the cosmic 'evil' pervading the town is the product of bourgeois paranoia. Tempting as it may be to relate the story to political changes in Hungary in the last days of Communism (Krasznahorkai's novel was published in 1989), Tarr has insisted that his films contain no allegory. Yet the narrative is certainly one of anxiety about the breakdown of an old, enfeebled order and the explosive release of repressed popular energies. Little in recent cinema is as terrifying as the sequence in which the masses attack a dilapidated hospital, beating up patients as they go: the violence, in an eight-minute shot, is accentuated by the ghostly placidity of the camera's drift along passageways and round corners, like a distracted onlooker. At last the hordes stop dead at the sight of a skeletal, naked old man the decrepit earthly remnant of God, perhaps? and lumber out like George Romero zombies while Tarr holds a close-up of Valuska's stare."
---Stanley Kubrick's boxes
---trailers for Drive, Haywire, In Time, The Guard, End of the Road, and Gahan Wilson: Born Dead, Still Weird 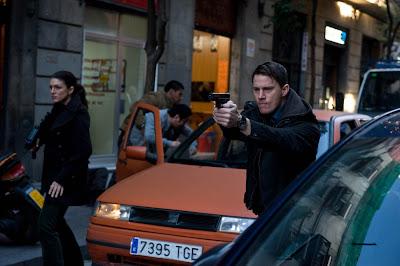 ---James MacDowell reviews the film criticism of Andrew Britton:
"Criticism is the systematic reading (that is, evaluation) of texts. Like all other activities, it takes place in the present. Like all other critical activities, it presupposes a principled attitude to the politics which constitute the present. The business of the film critic is to arrive at an understanding, on the basis of that attitude – which ought to be as alert and as conscious as possible – of what is of value in the past and present of the cinema, and to ensure that this value is recognized for what it is, and has the influence it ought to have, now."
---Mike Elgan converts to Mac
---Cameron Crowe's thoughts on music
---22 things Blake Butler learned from submitting writing: "Deletion is holy."
---from Parenti's Tropic of Chaos: Climate Change and the New Geography of Violence
---lastly, the tumblr pages of David Hudson and Mother Jones
Labels: Notable film and media links