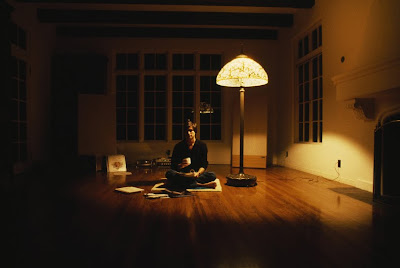 ---"Jobs's immersion in Zen and passion for design almost certainly exposed him to the concept of ma, a central pillar of traditional Japanese aesthetics. Like many idioms relating to the intimate aspects of how a culture sees the world, it's nearly impossible to accurately explain -- it's variously translated as "void," "space" or "interval" -- but it essentially describes how emptiness interacts with form, and how absence shapes substance. If someone were to ask you what makes a ring a meaningful object -- the circle of metal it consists of, or the emptiness that that metal encompasses? -- and you were to respond "both," you've gotten as close to ma as the clumsy instrument of English allows."

---"I've written before about how the study of Zen Buddhism shaped Jobs’s design sensibility and business philosophy. Jobs was a passionate advocate of what Buddhists call `the beginner’s mind' — an outlook free of the learned constraints that lead to preconceived solutions to problems. He preached and practiced the need for radical simplicity and rigorous focus, both of which are core Buddhist values. And he was a deep believer in the validity of Japanese traditional aesthetics, whose precepts are deeply intertwined with the ideas and practice of Zen.

That was the essence of Jobs’s unique genius — understanding that absence defines presence; that the only path to the great new things of the future was the merciless elimination of the good old things of the past.

There’s a famous koan, attributed to the Chinese master Linje, which goes: `If you meet the Buddha in the road, kill him.' The koan wasn’t an exhortation to murder, but a metaphorical admonishment not to be bound up in dogma, in conventions, in standards. You cannot pursue the Buddha-becoming if you’re slavishly attached to the Buddha-that-is. You cannot grow if you’re unwilling to let go."
Labels: Steve Jobs Zen

SPEEDbit said…
Great post. Steve is gone, but his genius innovations which as you said were born out of his Buddhist followings will be remembered and cherished for generations to come. A true giant. RIP Steve. You will be missed.
October 15, 2011 at 11:06 AM