Rock of Schlock: 6 notes on Rock of Ages 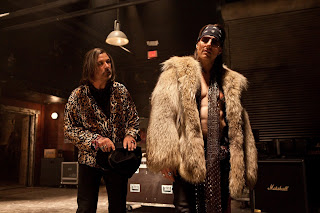 1) I enter the tiny theater number 11 of the Regal Stadium cineplex.  Inside, the air is unusually stuffy. The few scattered people there seem deranged, solitary. Are they big Glee freaks who want to see Tom Cruise fawned over by groupies? Broadway musical enthusiasts nostalgic for bad '80s anthemic power ballads? One older man, sitting in front of me, fans his face with one hand.

2) In the opening scene, Sherrie Christian (Julianne Hough) sits a bus traveling from Oklahoma to Los Angeles and sings "Sister Christian" after she looks at her record collection in her suitcase.  She intends to make it big as a singer in Los Angeles just like Ali (Christina Aguilera) did in Burlesque (2010). She doesn't appear to be carrying any clothes in her suitcase, just records.  The year is 1987. Various others on the bus start harmonizing with her:

"You're motoring
What's your price for flight?
In finding Mister Right
You'll be alright tonight."

The scene alludes to the "Tiny Dancer" sing-along in Almost Famous (2000), but whereas the former was dramatically prepared for and semi-realistic, in Rock of Ages we appear to be living in Sherrie's dreamworld, a musical fantasyland where random bus drivers, prostitutes, and Republican activists may burst into a Pat Benatar song at any second.

3) Sherrie arrives in LA, only to have her suitcase immediately stolen.  Drew Boley (Diego Boneta) attempts to save her luggage, but he's too late to capture the thief.  Still, Drew and Sherrie fall in love after he chivalrously finds her a job as a waitress at the Bourbon Club.  Some sample dialogue: 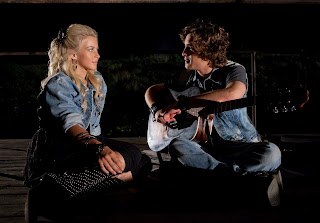 Drew: "I try to be."  [Drew and Sherrie both smile.  They are young, blank, ambitious. They have very nice teeth.]

Sherrie: "You're gonna sing me a song."

[Drew hesitantly sings the first lyrics of a very well known power ballad as if for the first time.]

Sherrie: "It's so beautiful!"

4) In the lower circles of hell, I can see people sitting through this slick Gleepocalyptic cinematic-equivalent-to-muzak swill, but it still left me wondering . . . what is Catherine Zeta-Jones doing dancing to "Hit Me With Your Best Shot" as Patricia Whitmore, conservative rabble-rouser protesting against the sinful goings on on the Sunset Strip?  A sample protest sign: "Rockers burn in hell." As her LA mayor husband (Bryan Cranston) allows himself to be spanked by his mistress in his briefs while Patricia dances in church in defiance of a Stacee Jaxx (Tom Cruise in vintage Axl Rose gear) poster, are we supposed to find this funny? satirical? affectionate? nostalgic?  I couldn't honestly tell.

5) After the unholy remake of Arthur (2011), Russell Brand deserves to be involved in Rock of Ages, but what's Alec Baldwin getting out of playing Dennis Dupree, the stubbled owner of the Bourbon Club?  Was Paul Giamatti intrigued by the acting challenge of inhabiting Paul Gill, the smarmy pony-tailed manager of Stacee Jaxx? Do these people like turning into cartoon versions of themselves?  In musicals, one can accept thin characterization in part (one hopes) because musical performances make up for it, and in part due to how far away they are on stage.  Movie adaptations of musicals, on the other hand, tend to emphasize the superficiality of what's on display. Characters can seem too loud, too close to the camera, and painfully vapid. Too often, the dialogue functions as filler between songs, but what does it mean to bridge the gaps between lyrics like "I wanna know what love is.  I want you to show me"? 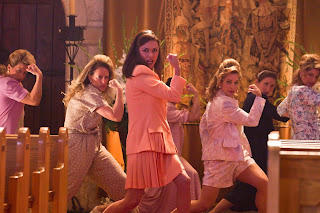 6) So, perhaps I fail to understand the campy spirit of Rock of Ages.  I can only see Tom Cruise as relentlessly opportunistically hyping his brand, and if that means slithering around like a 48 year old variation of a 25 year old Axl Rose, wearing fake tattoo guns stuck in his leather pants, and drinking scotch with a baboon named "Hey Man," so be it.
Labels: Rock of Ages

Jason Bellamy said…
I happened to see the Broadway version in NYC a little over a month ago.

I'm a sucker for stage musicals. I love the energy of a live musical performance built around some kind of dramatic arc. And it doesn't hurt that I just don't see musicals that often. (Relative to the average population, I've seen a lot of shows. But how many is that? 30? 40? At less than 50. Not a lot.)

Anyway, "Rock of Ages" is the only stage musical I wouldn't see again. I went in expecting it to be sing-along-with-80s-hair-metal, and that's what it is. But it struggles whenever it tries to be anything more. There really is no dramatic arc -- not one worth caring about at least. It's all smacks of desperation to find a way to sing these songs -- some of which work very well and others that don't at all.

It's a show that would have been better off with a "Glee" approach: Drama, drama, drama, and then when it comes time to sing, just sing the damn song whether it makes perfect sense or not and get out of the way of the musical number.

The attempt to stitch them together just didn't work. And in the end the ONLY thing that made the show in any way compelling was the energy of a live musical performance.

The Film Doctor said…
Thanks for your clarification of the stage musical. I still don't understand why the show Rock of Ages is popular, or what people get out of it. I've seen some musicals that I've liked (not so many movie adaptations . . Cabaret?). The film adaptation of the Broadway show of The Producers didn't work because the director made few concessions to the camera being closer than the audience would be in a musical, so the acting became bizarre and extreme.

I'm also not a huge fan of Glee, so that may have been my key problem (how one could ever justify having people sing "We Built This City" in any case is beyond me). Glee gets its audience to root for the pseudo-adolescents as they battle the Man and societal oppression and discrimination while also appearing touching because they can do justice to an old song that the audience responds to nostalgically--a sickly mixture of emotional overkill. In the case of Rock of Ages, you have older A-list actors singing of a very limited version of rock and roll from one of the worst periods of bombastic over-produced schmaltzy music. Rock of Ages pretends that punk and Madonna never existed, that grunge never happened, and even music videos are a sell-out. I liked early music videos and Nirvana, so in just about every way, my sense of musical aesthetics clashed with the movie. When I should have been laughing along with the affectionate nostalgic hijinks, I was staring in horror.
June 17, 2012 at 9:54 AM

Maurice Mitchell said…
FilmDr, I can't stand Tom Cruise, but I thought for sure he would get a crowd for the six-pack. Guess cooler heads prevailed.
- Maurice Mitchell
The Geek Twins | Film Sketchr
@thegeektwins | @mauricem1972
June 19, 2012 at 5:00 PM