When mass annihilation is not enough: 8 problems with Seeking a Friend for the End of the World 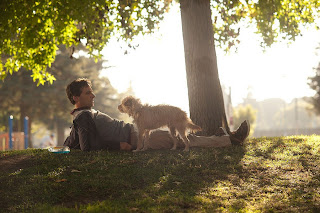 In comparison to the brilliant Melancholia (2011), Seeking a Friend for the End of the World has 8 major problems with it:

1) The title.  "Will you be my friend?" the movie pleads.  Such neediness, even in an apocalyptic context, is unattractive.

2) The name of the asteroid is Matilda. Matilda? What is this--mass death from some cosmic Aunt?

3) The dog.  Depressed after learning of the infidelities of his wife, Dodge (Steve Carell) vaguely attempts suicide by drinking a little Windex in a park one night.  He wakes the next morning to find a Benji-like cute little dog near him and a Post-It note on his chest saying "Sorry."  He takes the dog with him on all of his subsequent adventures, which brings up the main problem with this movie:

4) The sugary sweetness of it.  We learn at the outset that Matilda will hit the earth in 21 days and destroy all life in the process.  Thankfully, (and one becomes even more thankful for this key point as the movie persists), everyone will die.  So, I can only imagine that some film executive at Columbia Pictures insisted that writer/director Lorene Scafaria sweeten the darker implications of this painful fact any way she could.  So, bring in a dog, stick exactly to romantic comedy formula, make Keira Knightley's hipster Penny character as winsome, ditsy, and quirky as possible (no matter what damage that does to her screen image), never actually show the asteroid, indulge in Steve Carell's noble tendencies, and so on.

5) Then there's Steve Carell's sensitive sentimentality.  I was trying to remember--how is he a comic?  His character gets into humorous situations (a visit to Friendsy's [sic] restaurant that devolves into a tasteful hint of an orgy, an appearance at work at an insurance agency where the "Armageddon package is extra"), but Carell's living too much in a kind of embalmed Los Angeles rarefied world of celebrity to besmirch himself much with comedy these days. With his sensitive eyes, his argyle sweaters, and his morose, disaffected acting style, he's starting to resemble Mr. Rogers by way of Dr. Marcus Welby. His sense of decency has become repellently therapeutic. While everyone else on earth goes berserk, throws riots, shoots up heroin or whatever, Penny and Dodge decide they want long soulful conversations about being afraid of dying alone, preferably over a home-cooked dinner with red wine. The movie becomes a matter of being annihilated in style, with proper humanity and sensitivity, while everyone else proves a bunch of underwritten, freaked-out jerks.

6) The road movie adventures.  One scene (in which Penny, proclaiming herself an "optimist", decides to hitchhike) strongly evokes a parallel moment in It Happened One Night (1934), the first major romantic comedy. At another time, Penny and Dodge arrive at a house full of survivalists (even though they won't survive), one of whom (Derek Luke) will loan them a Smart car. Ultimately, Dodge seeks his old high school girlfriend (kind of) as Penny strives to return to England to her family (sort of).  Mostly, they're just circling around what appears to be Ohio.

7) (minor spoiler alert) Dodge reconciles with his dad (played by Martin Sheen of Apocalypse Now (1979) Get it?) after 25 years of estrangement.  They play harmonicas together to show how they have harmonized after all of that time, reminding us that it takes a mere global catastrophe to bring them tearfully together again. 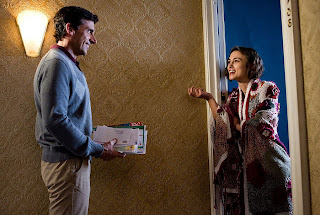 8) Repeatedly, Scafaria depicts apocalyptic human derangement as a fundamental inability to change one's habits after they have been drained of meaning.  So, Penny clings to her records in the midst of a riot, a man mows his lawn, people still go to work, and Dodge throws out his wife's stuff from their apartment even though all of this shifting around of mise en scene is a moot point. The film, meanwhile, doesn't seem to want to acknowledge how it clings to its romantic comedy/road movie conventions in much the same way.  Matilda supplied the filmmakers with an opportunity to create something sublime, an aesthetic that invokes both awe and terror. As Alan Pratt writes, "nihilism’s impact on the culture and values of the 20th century has been pervasive, its apocalyptic tenor spawning a mood of gloom and a good deal of anxiety, anger, and terror." By facing the "mood of gloom" head on, Melancholia becomes hallucinatory, visionary, and genuinely alarming. Seeking a Friend for the End of the World is too busy seeking winsome moments of human consolation to fully face anything.
Labels: Melancholia Seeking a Friend for the End of the World

Jason Bellamy said…
Doc: You suggest this movie lacks originality while underlining it at the same time: indeed, this is a romance amidst a disaster; not a disaster movie. In my personal experience, that's rare, although someone on Twitter implied that 1998's LAST NIGHT has a similar spirit.

It would take more time than I have to list the film's many strengths. (And, truly, I was far more moved by this film's conclusion than MELANCHOLIA's, which I say almost hesitantly because I'm afraid someone will read that and twist it around and suggest I'm comparing the two films. I'm not. I'm just responding to your mention of them both, with comes with it an implication that we need to wallow in misery to reflect on the end of times. This film proves to me that we don't.)

Where you find nothing but convention, I find a sloppy little movie that feels warmly familiar while also remaining largely unpredictable -- sometimes just because it's sloppy.

The Film Doctor said…
I look forward to your post, Jason. I'm the sort who finds the quote unquote "depressing" aspects of Melancholia immensely cheering and invigorating, while all of Seeking a Friend's attempts to soft-pedal everyone's imminent annihilation depressed me to no end. When Knightley first appeared weeping in the window, I couldn't believe that she had chosen to act like that. I thought--really?!? She's really going to hold her albums throughout the rest of the movie? I agree with you that the film is sloppy.
July 2, 2012 at 5:51 PM

Richard Bellamy said…
Yes, but along with the "sugary sweetness" of this film, there's a lot of serious stuff here. It realistically portrays the varying responses to the impending apocalypse. People commit suicide, let out all the stops and do dangerous things, get drunk, riot, or simply do the usual things: ride bikes, surf, clean. As part of the recent trend in post-apocalyptic/end-of-the-world films and novels, often as a parody of that genre, this is a very funny, very enjoyable contribution.
July 4, 2012 at 11:49 AM

The Film Doctor said…
Yeah, I guess. I had trouble seeing past the movie's sentimentality. There's something complacent and coy about Steve Carell's screen personas that I find annoying (although, oddly enough, I liked his Dinner for Schmucks). Such earnest attempts at emotionally-connecting-with-the-audience with his soulful stare was a bit much in such an apocalyptic context.
July 5, 2012 at 12:06 PM