Snowed under: 8 notes on Snow White and the Huntsman 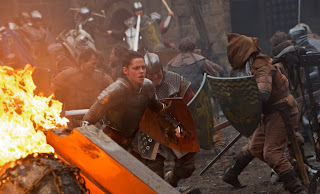 1) As I walked out of the cineplex late Friday night after watching the 10:15 showing of Snow White and the Huntsman, I wondered . . . what was the last decent film that I've seen by Universal Pictures? Huntsman consists of a jaw-droppingly disparate mixture of bizarre casting, pretentious dialogue ("You have travelled far--with a great burden"), and a disjointed committee-written storyline that keeps stopping dead as it cuts back and forth between Snow (Kristen Stewart wandering about various magical lands) and the evil queen Ravenna (Charlize Theron) as she rages and/or ages rapidly (or not. I got confused by the transitions between aging makeup) in her castle.

2) As a fan of Charlize Theron, I was okay with the movie until it cut to dirty Cinderella-esque Kristen Stewart starting a fire with two rocks in the castle's north tower. She's supposed to be the put-upon "innocent" emblem of "purity," but I just saw her lose her virtue to a vampire in a much ballyhooed bed-breaking scene in Twilight Saga: Eclipse, so stomaching her as Snow White was nigh impossible.

3) Eventually Stewart resembles Juliet, Joan of Arc, and Greta Garbo in Queen Christina (1933), so I can see why she chose the role, but not why the filmmakers gave it to her. At one point (minor spoiler alert), both the Huntsman (Chris Hemsworth) and some guy named William compete for her love, so I immediately jotted down "Team Thor" and "Team William" in my notes. Will Stewart ever live down her Twilight associations?

4) I did see Mirror Mirror back in March, and found it pretty but harmlessly forgettable as Julia Roberts tried too hard to be a funny and likable evil queen.  That movie kept finding reasons to show off Armie Hammer's (Prince Alcott's) muscular chest, but the movie's light jokey tone did not mesh well with the more serious aspects (i.e. the starving villagers) of the fairy tale. 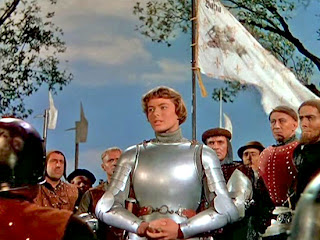 5) The corresponding hunk in this film, the huntsman of Snow, proves to be a rabble-rousing drunk corralled by the evil Queen to retrieve Snow from the Dark Forest.  A blank drunk he remains.  I couldn't see why he's mentioned in the title, or what he's doing in the film except to look handsome backlit by the flames of a nocturnal fishing village set afire by the Queen's henchmen.  He wields an axe much as Thor wields a hammer. He gets to kiss Snow later on, so I guess that's something.

6) For much of the latter half of the movie, all I could think of was Monty Python's Holy Grail (1975) and the Cate Blanchett-riding-on-a-horse-into-battle scene in the 2010 Robin Hood.

7) When the dwarves finally appeared, I wondered how the filmmakers got such major actors (a blind miniature Tiresias Bob Hoskins (!), Ian McShane, Nick Frost, and Toby Jones (I just saw him in Tinker Tailor Soldier Spy!)) to appear altitudinally challenged. When Snow sees some holy deer in a magical fairy-land scene, Hoskins says "No one's ever seen this before" as everyone gazes dewy-eyed at all the benign and twinkling CGI. When Hoskins realizes that he's in Snow's presence, he says "She is life itself.  She will heal the land. She is THE ONE. Where she leads, I follow. She will bring an end to the darkness." Perhaps so, but Mirror Mirror's Snow played by Lily Collins was better cast, in part because I've never seen her before. No one behind Snow White and the Huntsman seems all that concerned with any of the actors' over-familiarity.

8) Since Theron has such effortless star presence, the film had the opposite effect on me than what was intended. Who wouldn't root for the evil campy Queen? Snow White can go fly a kite.
Labels: Snow White and the Huntsman

Tora said…
Sooo, basically you mean you simply dont like K-Stew because of her Twilight fame? Sure, she isnt a "pristine" Snow like the growing-to-be-overrated daddy's girl Lily Collins, but the movie is supposed to be dark. Kristen is good at/with dark. And I must say, the more I see Charlize, the more overrated and yawn-inducing her bland acting become. But hey, being made up so much of makeup and botox herself, she does kinda suit the role, so maybe she'll impress me and *almost* make up for that horrible movie Monster. Kristen impresses me more all the time, but as Twilight is so "cool" to hate on blindly, I doubt people will even want to give her a chance, unfortunately.
June 4, 2012 at 11:07 AM

The Film Doctor said…
I thought that Kristen Stewart was wrong for the part. I've liked her work in other films like Adventureland, and I understand why she would want to move on to other kinds of roles. Snow White and the Huntsman kept calling attention to the vagaries of its casting choices.
June 4, 2012 at 11:41 AM

bd said…
The trailers are paradoxical for me... they are visually compelling, and the twist on the Disneyfied version etched into the back of my brain seems dirty and fun. And of course, there is Charlize.

And yet, on some sub-frequency, the trailers are broadcasting a warning: The investment in over-the-top CGI, and Charlize Theron walking out of a vat of crepes mix, makes me wonder what lack of film-craft the producers are trying to compensate for.

I've been fooled too many times by Hollywood hype, and my instincts tell me to wait for this to come out on Netflix several years from now.

But, I trust the Doctor. If there is a reason to ignore my instincts and plop down a sawbuck to see this thing on the big-advertisement screen, just say the word.
June 4, 2012 at 12:55 PM

The Caustic Ignostic said…
I couldn't get past the fact that Stewart is supposed to be more beautiful than Theron (what-what-WHAT?). It's all downhill from there. Pretty much uninspired fantasy roteness from beginning to end. It's amazing how much money they can spend on a film and leave no impression 30 minutes after one leaves the theater.

The Film Doctor said…
I recommend the Netflix wait. In the cineplex, I was thinking "what-what-WHAT?" throughout much of the movie.
June 5, 2012 at 6:05 PM

Maurice Mitchell said…
FilmDr, thanks for confirming everything I thought when I saw the trailer. Kristen Stewart feels like a miscast.
- Maurice Mitchell
The Geek Twins | Film Sketchr
@thegeektwins | @mauricem1972
June 6, 2012 at 10:19 AM

Richard Bellamy said…
Definitely, the preview surpasses the movie as a dramatic composition.

Theron was good but jarring at times as she strained the wrath bit. Love her intonation of "Mirror, mirror ..."

Stewart. I thought she was right fetchiing in her armor or sprawled in the snow. But maybe that's because I'm getting old. You got to love how she scowls under her forehead or you gotta leave her.

Loved the fairy tale prologue, but then, if this is a fairy tale, how come Snow says the Our Father? That didn't seen to fit.

Richard Bellamy said…
Oh, and, assuming you still teach, are you on summer break yet? I am as of now. Have a great summer vacation. Teachers unite!

Apropos of your filmmaking teaching, I had a very smart and motivated 8th grade section that was obsessed with The Hunger Games books. So, we took time out of our film history unit and adapted and shot our own Hunger Games movie covering the whole games sequence.
June 9, 2012 at 4:13 PM

Yes, I'm on break too. I didn't teach a video production class this spring, but I did try out a movie evaluation essay assignment, and largely it went well. I especially enjoyed getting student reactions to Pauline Kael's review of Bonnie and Clyde. Some said that her analysis of that film was of the best they read in the class (they begged to differ, however, with her low opinion of Return of the Jedi).

Your students shot the violent scenes of The Hunger Games?

Last night, we rewatched Alien on DVD. Such crude special effects! But the straightforward storyline appeals to me much more than the murky plot shifts of Prometheus.
June 10, 2012 at 11:02 AM

Richard Bellamy said…
Yes, Alien is vastly superior. It takes time to build tension; Prometheus is in too big of a hurry to get to the horror.

I worried about doing the violence in The Hunger Games but I was ready to argue that we were just adapting what is accepted as classic YA literature. We were discreet. The only blood was on Rue's shirt. The most violent part ended up being Thresh hitting Clove with the rock. I created a very convincing splatter sound effect by smashing a rock on a towel soaked with water.
June 10, 2012 at 10:10 PM

The Film Doctor said…
That sounds great, Hokahey. You should share your sound effects techniques (and any others?) on a blog post.

Academically, I'm wondering how we can formalize the many internet possibilities (as seen in the film blogging world) as part of class instruction. I'm still just beginning to think that way.
June 15, 2012 at 2:17 PM

Jason Bellamy said…
For reasons I can't quite explain, I wanted to see this one and got to it today.

Its biggest fault, indeed, is a horrendous screenplay that, yeah, feels written by committee. It's a collection of scenes, each of which function OK in their moment, but none of which really stitch together to build a theme or develop characters.

Case in point: At the end of the movie, Snow gives the ubiquitous "who's with me?" speech to the troops. Of course, everyone is in, and her huntsman not-quite-boyfriend drops to his knee with a smirk on his face that says, "Look how she's matured into a leader ..." Except, well, she's basically a leader the whole time. There's nothing cute about her speech because she spends the entire movie wanting to deliver it and pleading for help to have the chance.

That's one example, of course. There are many, many others -- some in terms of character development (or lack thereof) and some in terms of tone. Often one scene plays quasi-"realistically," and the next will play like a campy cartoon. Neither approach is wrong, but the back and forth creates whiplash at best and snickers at worst.

I was surprised at how much I didn't mind K-Stew in the role, but I was irked that her younger self had rather distracting freckles that didn't seem right, and I struggled to imagine the scenario(s) in which the life-imprisoned Snow was fitted for body-hugging gowns to wear as she got older. ("Sure, this dress is going to get sooty and mangled in about 24 hours, but we like our prisoners dressed like proper ladies.")
June 23, 2012 at 7:02 PM

The Film Doctor said…
I found it funny to see Stewart in put-upon Cinderella mode. The movie brings to mind Tom Shone's quote from Tad Friend: "Hollywood's peculiar secret is that it's just as tough to cook up a memorable commercial movie as a critically lauded indie film — indeed because there are so many chefs over-egging the pudding, it's tougher." I was surprised by how sloppily written Prometheus turned out to be in its third act. One would think with all of Scott's superlative attention to visual detail, he would be more careful about the writing. Another odd point: Charlize Theron is more compelling in Snow White than in Prometheus.
June 24, 2012 at 6:01 PM