"The trick . . . is not minding that it hurts": Prometheus links 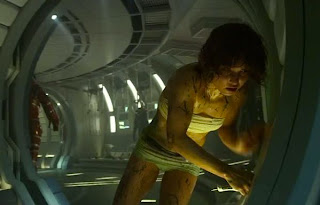 ---"Fassbender goes to the bridge, and fires up the computers to see what’s going on. Colourful displays shimmer into being – motion sensitive read-outs unfold and hover in front of him, their only goal in life is to provide him with information, and look great. Fassbender smiles, perhaps marveling at the possibility that one day in the not so distant future, all this marvellous technology could be replaced by clattery keyboards, blinking LEDs and monochrome cathode ray tubes - almost like something out of a 70s horror movie. . ." --Henry Rothwell

---"Why doesn't Idris Elba care what's going on with his crew?
Doesn't Idris seem weirdly disinterested in all the super-dangerous mapping and crew members going lost in that alien pyramid? He's the guy who's got a whole 3-D map in front of him, and yet instead of guiding his scientists from room to room, he wanders off  . . . and appears pretty nonchalant  . . .  because he's not really paying attention to them." --from "10 Questions"

--the orrery, "an Age of Enlightenment way of looking at a solar system"

---"There’s a familiar phenomenon of filmmakers hiding their loss of inspiration behind the ostensible social or political significance of their work. Ridley Scott does as much in Prometheus—not with politics but with chthonic mumbo-jumbo, pseudo-religious, pseudo-biological, and pseudo-mythological bombast, and a lumbering audiovisual scheme to match. . .

Scott has a longtime attachment to the science-fiction genre, and I figured that, after the lumbering, leaden, and wit-free slog of Robin Hood, he’d be out to prove that he still had his mojo. Instead, he took the same laborious pompier style as fell flat in Robin Hood and attempted to justify it with a ponderous subject. The movie lacks any joyful sense of discovery, such as emerges (intermittently) through the vainglorious bombast of Alien. Scott’s grim direction here seems to respond in advance to its critics: of course there’s no fun; the creation of human life and the destruction of it from that very source is serious business and deserves as grand and sober a treatment as possible. And perhaps it’s all to the good that there’s no humor in the movie; a single titter breaking through the blanket of dulled feelings would build rapidly into guffaws of derision that might threaten to drown out the dialogue to the end."  --Richard Brody

---The sound of Prometheus

---"Scott's new movie started life as a straightforward Alien prequel but, he explains, as he developed it with writers Damon Lindelof and Jon Spaihts, they strayed further and further from the source material. The film will, however, reveal the origins of the so-called 'Space Jockey', a giant, skeletal space being found dead at the beginning of Alien. Might he hold the key to the origins of life on Earth? That's what the crew of the Prometheus hope to discover on their ill-fated mission.

The film's mysteries are derived from Scott and co's research into myth and ancient civilisations, and he asserts a genuine belief in their possibilities.

`There's a famous Inca carving of a guy sitting on his back, in a frame, and underneath him is fire. He's wearing a helmet and looking up at the universe. To me, that's a goddam spaceship. A lot of Asian and Indian drawings are obsessed with the notion of fire coming from the skies in the form of chariots or vehicles. There are constant references in Egyptian artwork to a very large figure with a lot of small figures in worship. Is that a pharaoh, or a visitor? Why is he helmeted? The drawings of a head with one big eye: that's a man in a space suit.'

`All these things are considered mumbo-jumbo, but they were written about by Erich von Däniken in Chariots of the Gods [1968], and a lot of Erich's shit is now being reconsidered. Scientists are saying: now we know a lot more, we believe we're not the only life-form in the galaxy. I've always intuitively thought that, while everybody was laughing at Erich.'" --from Tim Walker's "Is Ridley Scott the Most Macho Man in Movies?"

---"This sort of textual overdetermination is common in SF, helping underpin not just the sorts of strategies of estrangement it employs but the extremely fertile and generative ways it relates to reality. Yet in Prometheus it often seems to do exactly the opposite, suggesting not new understandings but gesturing towards old ones, whether in the form of the repurposing of the plot of 2001 (ancient artifact, trip to stars, crazy computer, impossible secrets), or the reminders of Blade Runner, Alien and Aliens (psychopathic androids, greedy corporations etc etc)."  --James Bradley

---the cultural influences in Prometheus

---"The movie opens with an alien “Engineer” preparing to seed a primordial planet—presumably Earth—with life. He accomplishes this by drinking a black goop which causes him to die in agony, disintegrating at the cellular level. It looks cool, but forces you to wonder: Is this really the best means available for this incredibly advanced species to introduce genetic material to a planet? It’s a little like finding out that Prometheus brought fire to humanity by setting himself on fire despite the ready availability of kindling."  --Julian Sanchez

---the Alien franchise, a conversation

---"Prometheus is scary only in the sum of instincts and talent for movie-making that have been lost."  --David Thomson

---"This is very much Ridley Scott’s world, a universe that we’ve seen before. But he’s tried to channel as much of that into the storytelling. Take the opening of the film—it’s this mysterious being who takes this strange substance and then falls apart in front of our eyes. I say to Ridley: ‘So where is he? Is this the planet Earth or another planet entirely?’ He tells me, and then I go: ‘Okay, do you want to tell people that? Should we put up a credit?’ And he says ‘No, don’t do that.’ That’s when I knew we were talking the same language. We want people to try and contextualize, and we believe that people are seeing this for a reason, that they want to connect the dots for themselves. And I think the discussions that have erupted after seeing this movie is proof of that—this is a very, very active viewing experience."  --Damon Lindelof


---a scene from Prometheus:

David--"What did you hope to achieve by coming here?"

Charlie--"What we hope to achieve was to meet our makers, to get answers, why they even made us in the first place."

David--"Why do you think your people made me?"

Charlie--"We made you because we could."

David--"Can you imagine how disappointing it would be for you to hear the same thing from your creator?"

---"So then, if Ridley Scott’s Prometheus is poking at the edges of creation AND our central motivations, what’s left? If God is not to be found in our current definition, and if our constant thirst for knowledge might kill us all, where does that leave our culture? Finally, does the world rapidly progressing toward a sort of tech immortality pave the way for a humanity that is virtually unrecognizable?

This is why Prometheus is an important film, far more clever than the average summer movie, and worthy of introspection. I don’t know if all the answers are all in there, but I had a hell of a time considering the questions."  --Laremy Legel
Labels: Alien Prometheus