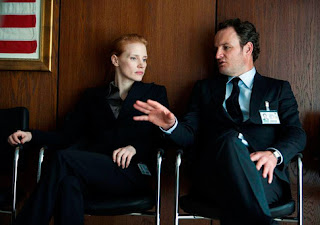 ---When Jessica Chastain says "They [the CIA 'enhanced' interrogators] actually received--in our film--no success from those interrogations. They didn't get anything that they used, so I find it really confusing why they would say it's pro [torture]," one should keep in mind this scene from the film.

---"We are immersed into an overwhelming environment in Zero Dark Thirty, just as we are in all of Bigelow’s films. But in this case, the environment is the numbingly anonymous one of Big Data, of the numbingly repetitious accumulation of “information” (whether by torture, surveillance, physical search, or collation of records), and of instantaneity (the annihilation of duration) mediated through video screens and telecommunications technologies.

As I was watching Zero Dark Thirty, I found the relentlessness with which all this was depicted almost unbearably intense. I’ve never seen (or heard) so powerful a depiction (or better, I should say, so powerful an enactment) of entropic dissolution and decay. All meaning, and all feeling, was draining away before my eyes and ears, without even the prospect of any sort of negative finality or conclusion." --Steve Shaviro

---"But I was surprised at what I saw. We’ve got the go-it-alone gunslinger, Maya, whose past is murky and future is vague. She’s Clint Eastwood’s 'Man With No Name,' re-imagined as a twenty-something woman. She gathers up a posse, heads out, and kills the bad guy. Then she leaves. Because she’s not actually Clint Eastwood, she cries a little. You expect to see someone chasing the C-130 shouting, 'Shane, come back!'

In reality, cowboys don’t work as targeters. (But they do ride with a large posse that helps with more than the gunfights. This 10-year hunt involved hundreds of people with several people at the core.) More often than not, effective intelligence—including the effort to find Osama bin Laden—is the result of sustained, collective efforts that spark moments of intuition among a pool of experts and processes, not individual hunches that compel monumental effort." --Nada Bakos

---"'The sad truth,' writes Karen Greenberg in a disturbing analysis 'is that Zero Dark Thirty could not have been produced in its present form if any of the officials who created and implemented U.S. torture policy had been held accountable for what happened, or any genuine sunshine had been thrown upon it.' In that case it would have been like making a film about a gangland murder as viewed by the police -- a crime that in real life the police went after -- but showing it in the film as if all the police on the scene had watched and done nothing. Such a film would stand exposed, and the falseness would draw general comment.

Yet regarding the American torture of prisoners, our leading officials said it was wrong, but then did nothing to back their saying so, nothing to prove that we believed it was wrong. The movie if anything endorses an attitude akin to the new president's: acceptance (with distaste) of a new policy of official ban supported by no accountability. For that is the status quo, and Zero Dark Thirty has this curious contradiction at its heart. Whatever can be absorbed into the story of the successful killing now qualifies as a necessary step toward the killing." --David Bromwich

---"Bin Laden wasn't defeated by superheroes zooming down from the sky; he was defeated by ordinary Americans who fought bravely even as they sometimes crossed moral lines . . ." --Kathryn Bigelow

---The Story of Change

----"Someone must have slandered Josef K., for one morning, without having done anything truly wrong, he was killed by a Predator drone." --Teju Cole

---"My prediction is that the underlying rates of depletion will continue to fight the recent production gains in the U.S. and elsewhere in the world until they soon come to a standstill, eventually swamping even heroic efforts.

Steadily rising energy costs and decreasing net energy yields will simply not be able to fund the future economic growth and consumptive lifestyles that developed nations are depending on (and that developing nations are aspiring to). In fact, the persistent global economic weakness we've been experiencing over the past years is an expected symptom of the throttling constraint decreasing net energy places on growth."  --Chris Martenson

---trailers for Emperor, Red 2, Upstream Color, The Power of Few, Sellebrity, The Best Offer, and Mud

---"But the beverage industry, dominated by Coca-Cola and PepsiCo, and represented by the American Beverage Association, has exercised its might against this public health initiative in ways reminiscent of the tobacco industry when it came under attack in the 1950s. The beverage industry argues that such taxes are “discriminatory” in singling out one category of food, that taxes would not work, and that government should not tell people what to eat. The tobacco industry said taxes would not work (they did work — tremendously well) and that government should stay out of people’s choice to smoke." --Kelly Brownell

---"If Facebook thinks you’re doing a recruiting query, for instance, it will present a few facts about each candidate’s work history on the results page. If it senses you’re seeking a hookup, you’re more likely to see relationship status and location. Most significantly, each result has a little search button — which means you can conduct further searches on that specific person, business, or group, letting you parse whatever information that target has shared on Facebook and permitted you to see."

---behind the scenes of Lincoln

---Joe Dante discusses The Trial and Lady from Shanghai

---"Anything that has been digitized is not private, and that is terrifying."  --Moby

---"About three years ago, Randy Moore, a struggling screenwriter living in Burbank, had an out-there idea: what if he took a tiny camera and, without asking permission, began shooting a narrative movie at Disney theme parks?

Moore had been visiting Disney World in Orlando with his now-estranged father since he was a child, and he’d also begun taking his two children, then 1 and 3, to Disneyland. He thought that juxtaposing all-American iconography of Mickey Mouse with a dark scripted tale would be cinematic gold, or at least deeply weird.

So with the help of an extremely small Canon camera and some very game actors and crew, the director began shooting a movie guerilla-style. . . .

What’s remarkable about all this is that, in watching the film, one doesn’t get the sense of a guerilla-filmmaking exercise. There are numerous wide shots, and scenes luxuriating in classic Disney images. It looks as if it was made with the full cooperation of the company, which of course it wasn’t.

'To me this is the future. Cameras in your hand. Cameras in your glasses. Anyone can be shooting at any time. And I think it will explode,' Moore said."  --Steven Zeitchik
Labels: Notable film and media links Zero Dark Thirty

The Film Doctor said…
Yes, I wonder if the media hype over Escape From Tomorrow will prevail over Disney's lawyers' attempts to shut the film down. The movie could open up all kinds of venues considered to be "forbidden." Moore redefines the concept of guerrilla filmmaking.
January 25, 2013 at 10:09 AM