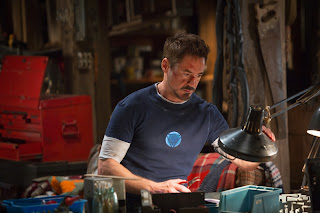 Iron Man 3 makes most sense if one thinks of it not as a movie, but as the skillful marketing of a brand. Robert Downey Jr. lends his expertise as an actor to provide a mildly subversive human face to this product line, and in many ways his performance in the movie (as well as his equally important Comic-Con appearances, worldwide promotional tours, etc.) resembles that of a politician satisfying the demands of his constituents, or a film executive making a presentation to his stockholders. I was struck by just how comfortable film executives at Marvel (Walt Disney Company) are with the entire Iron Man franchise. One can find them quoted in the May 10th Entertainment Weekly within the cover article subtly entitled "Stark Raving Awesome" (no editorial bias there): "I believe there will be a fourth Iron Man film and a fifth and a sixth and a 10th and a 20th," as if they have found the eternal profitable formula (superhero mechanic know-how, Avenger buddies, Downey's charming snark, robots, and Gwyneth Paltrow).

I learned of how important marketing is to Downey with the help of an article by Isaac Chotiner entitled "The Robert Downey Jr. Rehab Program."  As he writes:

"More than one person who knows him told me that Downey deliberately channels his manic intensity into the financial side of movie making. 'I made it my business to educate myself,' he explained to one interviewer. He is involved in every aspect of his films, from tinkering with screenplays to marketing strategy to developing new consumer bases for his franchises. A year ago, he gave an interview an obscure magazine called Success, apparently for no reason other than the sheer enjoyment he derives from discussing the intricacies of multi-platform initiatives. 'The thing is,' he observed, when explaining his acting choices, 'you’re either involved in a certain product design that’s a one-off, or you’re involved in a product line.'"

I didn't care much for the first two Iron Man films, but once I learned to look at the most recent manifestation of the franchise as a 2 hour and 15 minute advertisement for a second tier Marvel figure, then Iron Man 3 proved surprisingly pleasant to sit through. One need only view the movie as a visual code for self-promotion. How does it enhance the Tony Stark product line, with a generous amount of journalistic support?  I count 5 ways both within the movie and in its external marketing:

1) Journalists help by emphasizing Downey's problematic past with drug addiction, his many earlier movies that bombed, etc., and noting how he has turned it around. People are invited to feel good about how he has resurrected his career.

2) Within the movie, Tony Stark spends time with a rabid Tony Stark fan. At one point, Stark needs access to a local news van so that he can broadcast some information. The newsman turns out to be an out-of-control Stark enthusiast, even down to patterning his facial hair from his hero. Stark kindly gives the man his reluctant attention. Are scenes like this designed to serve as a kind of fan service for awestruck devotees in the audience?

3) Stark finds he need the help of a child named Harley (Ty Simpkins) as he researches a bombing in rural Tennessee, thereby taking providing kids in the audience with someone to identify with. One can find many blockbusters that similarly pander to the youth market, such as Terminator 2: Judgment Day (1991).

4) Iron Man 3 emphasizes how terrorists create propaganda to further their agendas. The bin Laden-esque Mandarin villain turns out to be a (mild spoiler alert) carefully constructed media platform, full of fundamentalist Muslim visual tropes on videos that illegally take over American television periodically, all designed to pander to American xenophobia. I am in the midst of reading Stephen Apkon's excellent The Age of the Image: Redefining Literacy in a World of Screens, and one passage seems relevant: 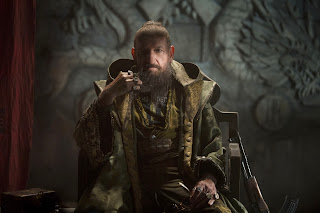 "Even the most radical organizations understand the power of visual media. In 2001, Al Qaeda reversed a decade-long Taliban prohibition on video as it created its own production company, As-Sahab, in order to spread its message and recruit new members. Headed up by the media-savvy disaffected American Adam Gadahn, the company once produced close to a hundred videos a year deep in the mountains bordering Afghanistan and Pakistan. Its reach, though, is global.

Evan Kohlmann . . . had respect for the skill of the As-Sahab productions, even if he finds their content despicable. 'It's actually amazing,' he said. 'You're talking about very, very high-quality video subtitling. You're talking about English translations. Graphic sequences have been done showing rockets being fired into an American flag, and having the American flag exploding into pieces. And it, you know, these are very high-quality videos. They're very dramatic. They get passed around like baseball cards. . . . the video form of expression has become the preferred method for expressing a point of view to an international audience, where a spoken language is not always held in common by interested parties'" (26-7).

5) Lastly, Iron Man 3 affirms the value of multi-media presentations by including scenes that show off what they can do. Aldrich Killian (Guy Pearce) makes a slick 3D presentation to Pepper Potts (Paltrow) of his own brain in a live feed. From the previous Iron Man movies and from The Avengers, we've already gotten used to Stark's research techniques that involve 3D displays of texts and images that evoke Minority Report (2002). In this film, Stark's research into a bombing just gets more elaborate, using his voice and hand gestures to move around a room full floating images (he even uses a 3D version of the crime site to locate some dog tags on the ground).

While still including the usual battle scenes, explosions, robot-battling action, and terrorist torture scenes, Iron Man 3 is also quite open about the rhetorical effectiveness of multimedia. In this light, it makes sense that Colonel James Rhodes (Don Cheadle) has trouble deciding between calling his exoskeleton/armor War Machine or Iron Patriot. Both terms have connotations that the movie takes pains to explore. It's refreshing to see a blockbuster that's somewhat willing to examine its own manipulations.
Labels: Iron Man 3 multiplatform initiatives

Richard Bellamy said…
FilmDr. - I found the Mandarin to be a very interesting character - darkly humorous, at times shocking. Playing on our Bin Laden angst, and giving him the advantage of human time bombs, he's quite disturbing, and then he turns out to be a depraved Londoner used as a propaganda ruse. That was a nice twist.

Did you stay through the credits? I like how Tony is unburdening himself to Bruce Banner, but Bruce hasn't heard a word of his confessional because he fell asleep.
May 13, 2013 at 3:53 PM

Yes, I liked the Mandarin too.

What else does one do except stay through the credits? I believe that The Avengers softened me to appreciate Iron Man 3 more than I would have otherwise. There are so many drecky blockbusters to see (or avoid) in the next few months. Iron Man 3 seems relatively banal, even easy on the eyes in comparison, especially when you can admire its promotional savvy.