The great romantic and the flibbertigibbet blonde: 11 questions about The Great Gatsby 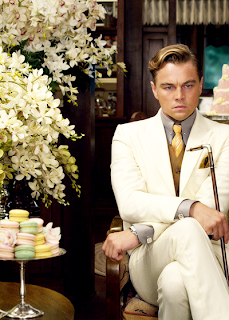 1) An entire movie about a handsome glorified romantic solely defined by his love for a flibbertigibbet blonde?

3) If we took away all of his trappings--the nice house, the associations with Romeo + Juliet and Titanic (note: DiCaprio inhabits the role extremely well), the parties, the car, and the fine clothes--wouldn't we consider Gatsby gullible and slightly silly?

4) While I admired the set designs, the costuming, the cars, and several scenes of the movie (especially the humorous super-awkward encounter between Gatsby and Daisy (with Nick Carroway (Tobey Maguire) making the slightly dubious arrangements for them to meet (sort of pimping out his married cousin)), and Nick's awkward drunken evening with Myrtle Wilson's (Isla Fisher) social circle), I kept wondering about Lurhmann's melodramatic technique as it began to wear me down. When in doubt, cut to the green light?

5) What is the significance of those spectacled eyes on the billboard again? My significant other (who teaches the novel) says it could indicate the absence of God. There's nothing to put your hopes in after the devastation of the first World War, so the divine power has been replaced with conspicuous consumption and advertising, the antithesis of religious hope. Ironically, the eyes look over the Waste Land-esque area of abject poverty, which just enhances the scene's air of futility. As Kathryn Schulz points out, the book is full of "low-hanging symbols."

6) Was Lurhmann borrowing a narrative strategy from Salinger's The Catcher in the Rye when he included the Nick-stuck-in-a-sanatorium frame device?

7) What would F. Scott Fitzgerald have thought of the movie's elision of psychiatric curing techniques and writing? Doesn't that equation diminish his artistic achievement?

8) As Nick, Tobey Maguire observes, perceives, sees, and then witnesses some more. Maguire is good at doing that, but couldn't he take a break from all of that burdensome point-of-view work and swing through the skyscraper canyons of New York for old times' sake?

9) In this rough and tumble blogosphere world of endless film analyses, why do the critics who liked The Great Gatsby often sound apologetic? Does the Internet encourage us to be competitively vicious?

10) My significant other (who really liked the movie) insists that Gatsby is admirable for being, as Nick says, "the single-most hopeful person [he's] ever met," the one man "exempt from [his] disgust." At one point, Nick yells to Gatsby in the distance, "They're a rotten crowd. You're worth the whole damn bunch together." As we gradually learn, Jay Gatsby is an idealist who deserves credit for sticking to his endlessly renewable love, no matter how much his beloved may be unworthy of it (not to mention she's married and with a child). Yes, Gatsby embodies a fond glorious vision that serves as the foundation of a beautifully written novel, but isn't he also, at bottom, a dashing but still delusional goofball?

11) Is his unwillingness to abandon a dream ultimately what makes Gatsby great?

---comparisons between the book and the movie

Craig said…
Haven't seen this - I plan to wait to laugh at home - but Richard Brody speculates (terrifically) that the insane asylum device was co-opted from Fitzgerald's essay "The Crack-Up," about his own institutionalization.

The eyes...I forget the symbolism about the eyes.

The Film Doctor said…
Thanks for the tip, Craig. I'll look into the Brody essay, although I wonder about the impulse (if Brody's theory is true) to conflate the author with the character. I would just as soon associate F. Scott Fitzgerald with Gatsby, since Fitzgerald had to impress Zelda (and earn money worthy of her) to win her love.

It still astonishes me that such a straightforward romantic impulse underlies an entire heavily canonized work of Art.
May 14, 2013 at 8:14 AM

DeadSpiderEye said…
Been a long time since I read the story, It's a lovely piece of prose or at least that's how I recall it. It digs in a few too many sensitive spots for it been on my reread list. I have seen the first film and struggled a bit to see its relation to the written work, it all seemed a bit Peyton Place (TV) in comparison but I suppose that's what you gotta expect. Dunno if I'll bother with this version, seems a bit -worthy- might pick the book again though.
May 14, 2013 at 11:10 AM

The Film Doctor said…
Yes, the novel is gorgeously written, and Lurhmann is surprisingly faithful to much of it, even to the point of writing key sentences on the screen in a slightly distracting way. I give Lurhmann credit for sticking to his extravagant aesthetics even amidst all of the ferocious criticism his movies tend to receive. He doesn't hold back.
May 14, 2013 at 11:18 AM