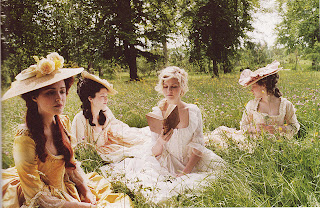 ---the right to observe and record

---"This is how we live: greedily, enviously, superficially, in a state of endless, self-justifying desire. This is the pursuit of happiness, mirrored in the pleasure these movies provide."  --A. O. Scott

---Interiors on the spaces of Martha Marcy May Marlene

---"The reason to keep working is almost to build a certain mental tone, like people talk about body tone. You have to move quickly when the time comes, and the time might come very infrequently – once or twice a year, or even less."  --Brian Eno

---"The hardest thing in making a movie is to keep in the front of your consciousness your original response to the material. Because that's going to be the thing that will make the movie. And the loss of that will break the movie."  --Stanley Kubrick

---The Vertigo of Anagnorisis by Catherine Grant

---anatomy of a scene: Frances Ha

Joel Bocko said…
Happy birthday! I like the low-key celebration (I myself have taken another route, haha). Funny how so many of us started around the same time (I mean, even blogs I discovered further down the line). What was in the water in 2008, I wonder?
May 24, 2013 at 11:11 AM

The Film Doctor said…
Thanks, Joel.