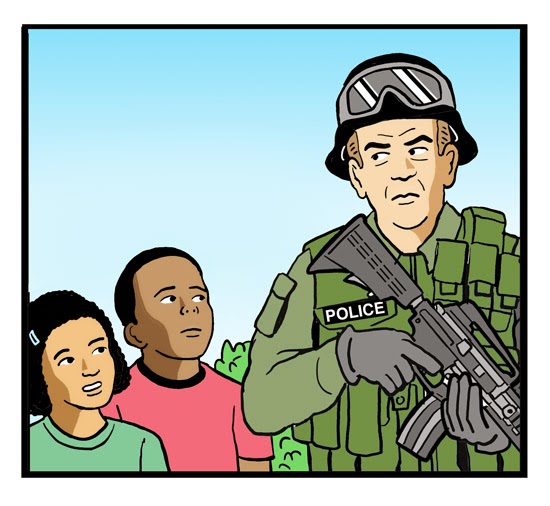 ---"whenever I see masked and helmeted police in photographs and movies or on the street going after protesters, I wonder, as I did during a battle royal between peasants and cops in the summer’s class-war sleeper Snowpiercer: 'Who are these hidden people?' It crosses my mind anytime I see a helmet swing a nightstick at a skull. The movies, especially dystopic science fiction, have gotten really good at siccing human drones on human beings or just showcasing warfare as stacks and stacks of computer-generated menace. Ferguson demonstrates how good life has gotten at turning into science fiction. That collapse of the real and the morally unreal took place in last summer’s Fruitvale Station, which dramatized the 2009 shooting of 22-year-old Oscar Grant on an Oakland train platform. It opened the weekend before the president made his remarks about Trayvon Martin and race, and bears a subdued kernel of resemblance to the events happening now in Ferguson.

What is so affecting isn’t just that 18-year-old Michael Brown was killed when he was barely a man. It’s other things as well. One was how many reports of the incident that first day mentioned that he was about to start college. That’s a rite that’s universally emotional. But for a black male from a poor family, the first day of college is a freighted day that usually requires the sacrifice of more than one person. Black people know the odds of getting to and graduating from college, and that they’re low. That Brown seemed to be on the right path compounded the parental, local, and national outrage over his being wiped from it."  --Wesley Morris

---“I financed and made my own films from the start . . . My path has been autonomous and independent, so I don’t have any horror stories about glass ceilings and expectations and tense studio meetings.” --Ava DuVernay

---"I want to suggest that there may be a strong connection between the visual style of video games and the visual style of American police forces — the 'warrior cops' that Radley Balko has written (chillingly) about. Note how in Ferguson, Missouri, cops’ dress, equipment, and behavior are often totally inappropriate to their circumstances — but visually a close match for many of the Call of Duty games. Consider all the forest-colored camouflage, for instance . . . It’s a color scheme that is completely useless on city streets — and indeed in any other environment in which any of these cops will ever work. This isn’t self-protection; it’s cosplay. It’s as close as they can come to Modern Warfare 3 . . . The whole display would be ludicrous — boys with toys — except the ammunition is real. The guns are loaded, even if some of them have only rubber bullets, and the tear gas truly burns. And so play-acted immersion in a dystopian future gradually yields a dystopian present." --Alan Jacobs 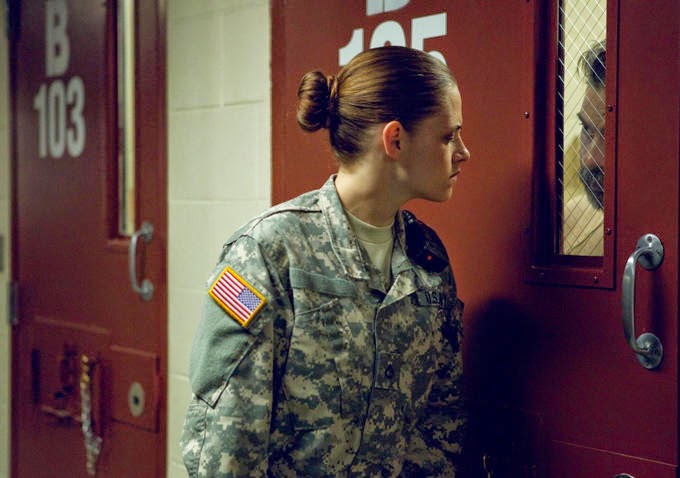 ---trailers for The Cosmopolitans, Saint Laurent, Camp X-Ray, Two Night Stand, The Babadook, and The Drop

---Lauren Bacall in To Have And Have Not

---"it’s time to re-think the Ramones as essentially an avant-garde outfit that just happened, also, to be popular." --Nicholas Rombes

---"Through Groot, Guardians captures Americans’ troubled relationship with the environment. We love the way nature makes us feel, but we also expect to take from it without worrying about the consequences." --Sarah Todd

---"Hamlet’s — and Shakespeare’s — charismatically demonic knowledge of the void at the heart of reality, the death that is the essence of life, catches something very real in our experience (or mine, anyway), a basic metaphysical uncertainty that should disturb all of us, a faithlessness and despair that no doubt has the poisonous potential to ruin the plans of our reformers and revolutionaries, of our dispensers of Christian charity and our disseminators of socialist-feminist politics, but a grim knowledge that nevertheless murmurs constantly beneath the busy clamor of everyday life and that seeks passionate expression in the face of all protest." --John Pistelli
Labels: dystopia Ferguson links

DeadSpiderEye said…
Those people swinging sticks, I know who they are. A guy called Milgram showed me where they live-- in the bathroom, just over the basin where I shave every morning.
August 16, 2014 at 10:55 PM

The Film Doctor said…
I do love that Milgram experiment. One of my favorites: