Nukes behind the rusty iron curtain: Mimi Leder's The Peacemaker (1997) 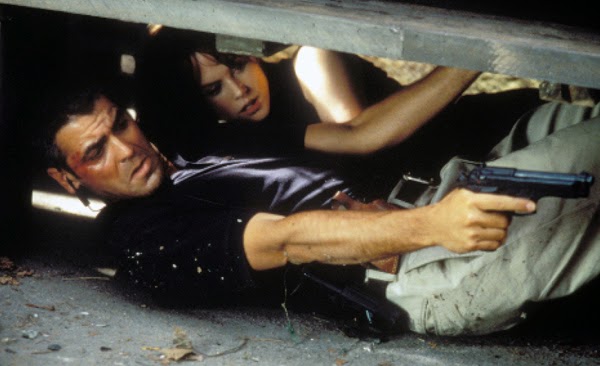 [I had just started writing reviews when this film came out.] Mimi Leder's The Peacemaker takes as its opening conceit a train loaded with nukes getting hijacked at full speed by a disgruntled Russian general and his red-lit night-goggled henchmen in the Ural mountains. Pretty soon the train collides into another one full of people just before a warhead blows up and evaporates two awestruck peasants. As the bomb's nuclear pulse flies into the camera lens, frying everything in sight, the scene cuts to Nicole Kidman swimming olympic sized laps in some Washington DC pool. Soon she's leading a White House Nuclear Smuggling group into tracing the whereabouts of those ten "broken arrows."

Repeatedly in this movie, Kidman's character Dr. Julia Kelly walks full speed into a room or a hangar full of state-of-the-art computers, telephones, and great maps on the wall as harassed preppy underlings debrief her on the crisis at hand as the camera circles around them. "Give me Russian military command!" she cries. There's a hint of romance in a bouquet of flowers that arrive from some guy named Roger, but there's no time for fooling around. This movie means business.

George Clooney (who plays Lt. Col. Thomas Devoe) got on my nerves for lowering and wagging his head around with his exaggerated televised charm. He could learn a few lessons from Cary Grant for holding back his gestures for maximum effect. Regardless, Julia and Thomas head off to Austria to research the Russian general's bomb-filled truck driving towards Iran, and we're off on a decent James Bond / Tom Clancy-style thriller.

In spite of the tank-like military movement of many of the film's set-piece scenes, I enjoyed this film in part because of Mimi Leder's intelligent direction. Constrained by the limitation of a macho-action plot, Leder strives at every turn for greater depth, and this tension between explosions and human interest makes the movie surprisingly engaging. She humanizes the Bosnian terrorist villain Dusan Gavrich (played by Marcel Iures) by emphasizing his religious intensity, his classical piano playing, and the war-torn landscape of Sarajevo around his apartment. When men die in combat, characters actually mourn them for a minute or two. Even Clooney covers his face later in his hotel room when one of his Russian contacts gets shot.

The fact that Julia and Thomas never get romantically involved keeps the film very businesslike, focused more on terrorist-stopping strategy than on star power. Even the thieving Russian general has a recognizable motive (money and weariness with Russian cutbacks in military might) in comparison to the cartoonish Red Baiting villainy of Gary Oldman in Air Force One. The title of this film turns out to be ironic as Gavrich comments on all of the harm America has visited on Bosnia in its efforts to keep the peace.

Lastly, the cinematography looks different--lots of dark blues and greens with burnt sienna highlighting--capitalizing on the grungy landscape beyond the former Iron Curtain. The climax, a bomb threat to New York's United Nations, pulls a few too many children in the way of sniper rifles for emotional effect. A retiree covers his poodle's eyes when a bunch of FBI men invade an elevator. Nicole Kidman's character gets to dismantle the little baseball-sized core of the warhead in the atrium of a cathedral. She uses a knife to try to pry the core open. "Be careful!" Clooney mutters as the seconds tick down on the red digital read-out. I kept hoping the timer would stop at 007 as it did in Goldfinger. Regardless of who gets blown up at the end, I found The Peacemaker surprisingly stylish and photogenic for a formulaic thriller.
Labels: The Peacemaker