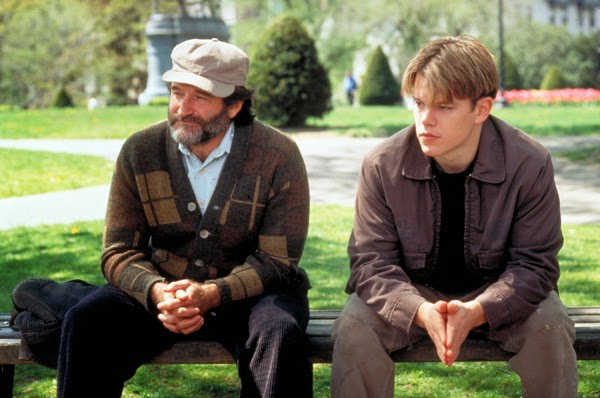 [Yet another of my early newspaper reviews.] Having seen Matt Damon's Tom Cruisey-easy-smile acting style in The Rainmaker, I didn't have much hope for Good Will Hunting. Take a young cute genius mathematician janitor with problems, stir in some Robin Williams therapy, and then add a title that sounds like Quest for Decency? Bleah. But it turns out that all those people praising the film were right. GWH is that increasingly rare media product--a film that allows the viewer to breathe, react, and think, a much needed antidote to the prevailing Batman and Robin sit-on-your-brain-and pop-your-eyes-out with-a-crow-bar aesthetic in Hollywood.

The two twenty-something writers, Damon and Affleck, make the inherently sappy storyline work by constantly juxtaposing Generation X slacker smarts against the fancier world of MIT math professors in Boston. Damon's poster-boy good looks contrast nicely with his machete-like way with words. Orphaned and abused as a child (the film just hints at this), Will Hunting has learned to use his genius as a shield and a weapon. When up against the legal system for punching a cop, he calls upon obscure legal statutes in his photographic memory to argue his way out of jail. When faced with a battery of shrinks, he reads their books before each session and then turns their techniques inside out, honing in on their weaknesses until they quit in disgust.

Meanwhile Will works as a janitor in the MIT math department just so he can solve dastardly difficult math problems without telling anyone he did it, and he hangs out with a bunch of Irish working class yobs in the low haunts of Boston. Someone compares Will to the Unabomber at one point, and the reference is apt: he'd just as soon hurt people with his brilliance as help them. Soon enough, an MIT math professor adopts Will and sets him up with weekly sessions with Sean McGuire (Robin Williams). Where all of the other shrinks fail, McGuire gradually develops a rapport with the brash young brat, mostly by mercifully not resorting to much psychobabble. We've seen plots like this before in The Prince of Tides, Ordinary People, etc., but again the young writers skirt the cliff edge of Freudian cheese by emphasizing Will's emotional sterility. The director, Gus Van Sant, explored another sterile character in To Die For, where Nicole Kidman's ice queen kills her husband and then revels in the media attention.

In this film, we gradually realize that Will won't let anyone near him or challenge him. His brains provide artillery against any personal encroachment, but what to do with himself after all of the intellectual putdowns? Robin Williams counters Will's irony with shaky gnomelike sincerity, and they play a kind of chess game of the psyche. I know it sounds hokey, but it works in part because of Van Sant's postpunk direction and the luscious contrasting colors (grunge burnt sienna, dark blues, and tacky reds) of cinematographer Jean Yves Escoffier. GWH's screenplay reminded me of other undersung Gen X films like Chasing Amy and Grosse Point Blank, but the film has a complex visual sophistication all its own.

Minnie Driver shows up as a love interest, a rich Harvard girl named Skylar Stella with an impossibly round face. I won't give away the ending, but imagine a glacier of ice starting to melt, a kind of lyrical softening you get in The Graduate. After all of that cold brilliance, it's nice to have a thaw.
Labels: Good Will Hunting Robin Williams